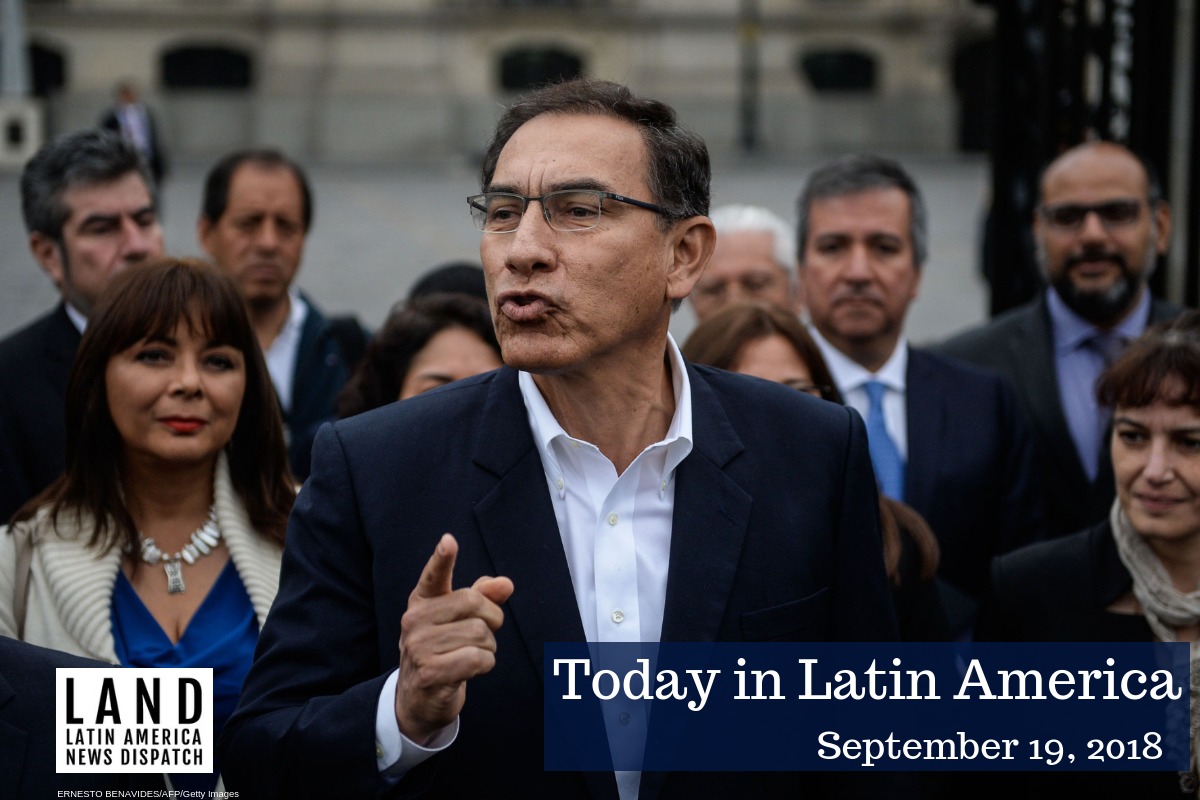 PERU: Peru’s Fuerza Popular, known as fujimoristas, approved two of President Martín Vizcarra’s reforms for the legislative body. Vizcarra proposed the reinstatement of the Senate and a term limit for congressmen. Both motions have been approved by the party led by Keiko Fujimori, daughter of former president Alberto Fujimori.

Miguel Torres, a Fuerza Popular congressman, stated that the party is committed to addressing the lack of trust around the country’s politics and that the party will vote as a block in favor of Vizcarra’s proposals. If passed before October 4, the president’s four reforms for the legislative and judicial powers will become subject to a national referendum on December 9, 2018.

MEXICO: After Mexican authorities were forced to move a refrigerated truck storing dozens of corpses, the governor of Jalisco fired the director of the state morgue for his “indolence and negligence” for the so-called mobile morgue. Former director Luis Octavio Cotero said that he told prosecutors about the dire situation of the increasing wave of bodies as a result of the ongoing drug war two years ago.

MEXICO: President-elect Andrés Manuel López Obrador claimed that Mexico is bankrupt during an event in Tepic, Nayarit. He said that his administration will not be able to meet all demands, but also assured to fulfill everything promised during his campaign. Emilio Azcárraga Jean, Executive Chairman of Televisa, ensured that there is confidence in the country’s economy and said that his company will support the new administration’s development projects.

UNITED STATES: Chrystia Freeland, Canadian Foreign Minister, arrived in Washington yesterday as Canada and the U.S. are set to resume talks on NAFTA today. Few days remain for the two nations to come to an agreement before September 30. Said due date was agreed upon to allow time for signing the new NAFTA deal before Mexico’s new administration takes office. The U.S. and Mexico already came to an agreement at the end of August.

JAMAICA: The Jamaican government imposed a ban on the importation, manufacture, distribution and, use of materials used in single-use plastics. Gradually starting in 2019, the country won’t allow single-use plastic carrier/shopping bags, styrofoam or plastic drinking straws. The ban aims to progressively reduce the use of plastics in the country.

PUERTO RICO: Ricardo Rosselló, the governor of Puerto Rico, presented two lawsuits against insurance companies that haven’t solved between 16,000 and 17,000 claims after hurricane María struck a year ago. The lawsuits seek to prevent the claims from expiring and to obtain $2.6 billion in damages.

GUATEMALA: Human rights associations filed a lawsuit against President Jimmy Morales for violating the Constitutional Court’s order to allow Iván Velásquez, U.N.-backed anti-corruption commissioner, to return to the country and continue his inquiries. Diana Ochoa, one of the five court judges, stated that their ruling annuls President Morales’ previous orders. María Consuelo Porras, General Attorney, stated that her office will continue to work with the Commission Against Impunity and that Morales —who has been linked to several cases of corruption— must respect the law.

HONDURAS: The Anti-corruption Council of Honduras uncovered five new cases of corruption that involve former First Lady, Rosa Elena Bonilla, as well as public officials from the Ministries of Health, Public Infrastructure and Energy. The investigation revealed that around $8 million dollars (more than $194 million lempiras) from public resources were illegally transferred to a network of companies linked to the families of the politicians. More than 70 new lines of investigation were opened regarding these new cases; between 12 and 15 have been judicially processed.

VENEZUELA: President Nicolás Maduro announced a series of 28 bilateral agreements between Venezuela and China. Already economic partners, China agreed to invest $5 billion more; Maduro said that this investment allows for Venezuela to double its oil exports to China. As part of the agreement, Venezuela agreed to cede 9.9 percent of its shares in SINOVESA, a joint-venture oil firm, resulting in a Chinese oil company owning 49 percent stake.

BRAZIL: Fernando Haddad, the presidential candidate who substituted Luiz Inácio Lula da Silva for the Workers’ Party, stated that if elected he would not grant a pardon to the former president. Lula currently serves a 12-year sentence for corruption convictions. He served as the Party’s official candidate until last week.