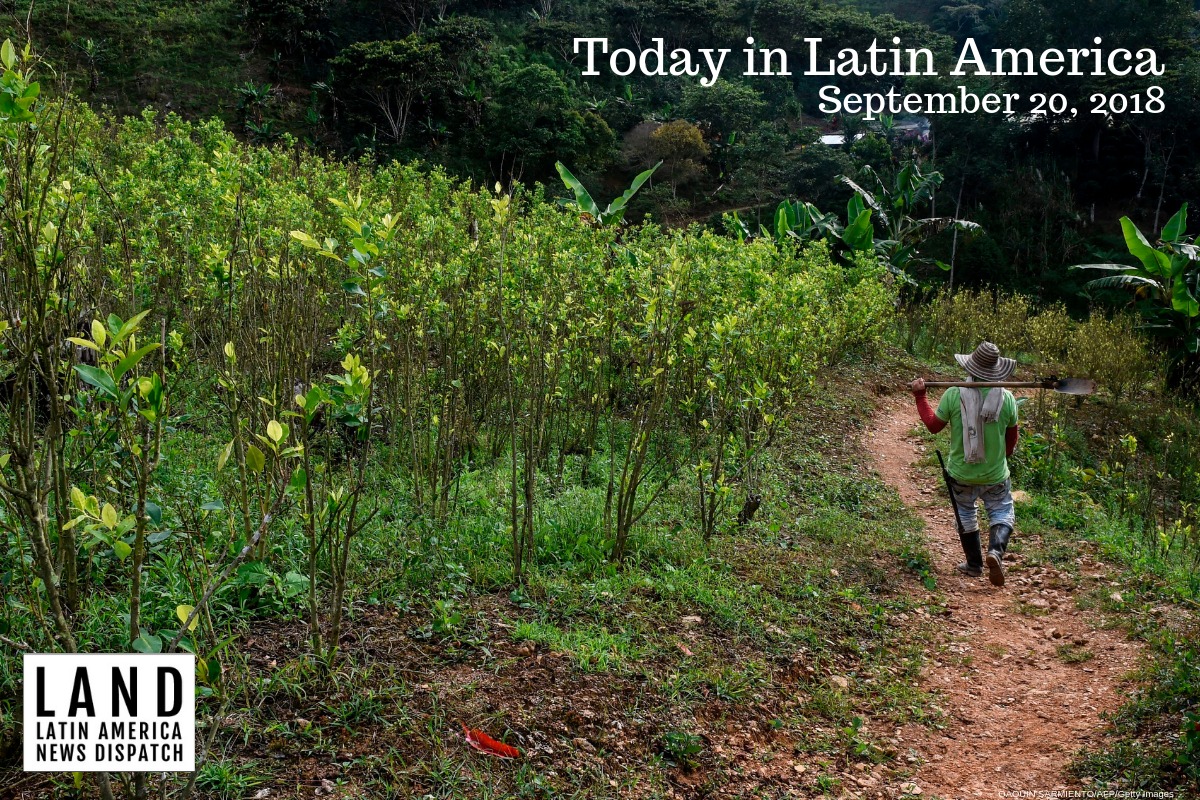 COLOMBIA: A UN report released yesterday said that coca leaf production in Colombia reached a record high in 2017, citing a 17 percent increase in hectares cultivated from the previous year. Officials worry that this could harm the country’s peace efforts. Colombia’s war on drug is assisted by the U.S. with $400 million and last year the U.N. contributed $300 million to compensate farmers who agreed to substitute growing coca with safer crops.

The findings could legitimize some officials’, including President Ivan Duque’s, calls for a revamping of aerial spraying of the herbicide glyphosate. The aerial spraying program was ended by previous President Juan Manuel Santos following warnings by the World Health Organization linking the chemical to cancer.

MEXICO: Yesterday marked the one year anniversary of the 7.1 earthquake which struck Southern Mexico killing more than 360 people. As of today, many families still remain homeless, and 434 buildings in Mexico City are still at risk of collapse. It has been reported that the extent of the damage was due to construction bribes and corruption but no one has been prosecuted.

NICARAGUA: The U.S. Ambassador for the O.A.S., Carlos Trujillo, rejected the possibility of a reunion between President Donald Trump and Nicaragua’s President Daniel Ortega, while the human rights’ violations continue in the country. In an interview with local media, Trujillo assured that the United States is willing to do anything in its power to help democracy return to Nicaragua.  President Ortega said he was willing to meet Trump in the upcoming U.N. General Assembly.

COSTA RICA: Archbishops of the Catholic Church mediated a first attempt at a dialogue between Government officials and public employee union members, after a ten-day strike against a proposed tax reform. The meeting aimed to settle the negotiation conditions between both parties. Meanwhile, the workers marched in the country’s capital as part of their strike.

HONDURAS: The start of the trial for the shocking murder of legendary environmental activist Berta Cáceres was suspended on September 17, after the family of the victim petitioned the case to be moved to another court to guarantee the impartiality of the judges. The judge indefinitely suspended the start of the trial until five other filings related to the case are resolved. The eight men are accused former soldiers and employees of Desarrollos Energéticos, company that developed the hydroelectric project that Cáceres opposed.

PARAGUAY: Three Paraguayan judges were suspended of their duties by a special jury for giving a convicted priest a minor sentence in a case involving the abuse of a 14-year-old. A prosecutor filed the complaint against the judges after they issued a suspended two-year jail sentence and an $800 fine to convicted Rev. Félix Miranda.

ARGENTINA: Argentine President Mauricio Macri met with five U.S. officials to discuss the country’s entrance into the OECD bloc, which underscores market economy cooperation and is mostly composed of high-income economies. U.S. officials reiterated their support for Macri and continue to back his administration in the midst of the Argentinean government’s IMF backed austerity measures implemented in order to mitigate a recession fueled by a currency crisis that has been ongoing since late last year, which have led to protests by labor unions and social groups.