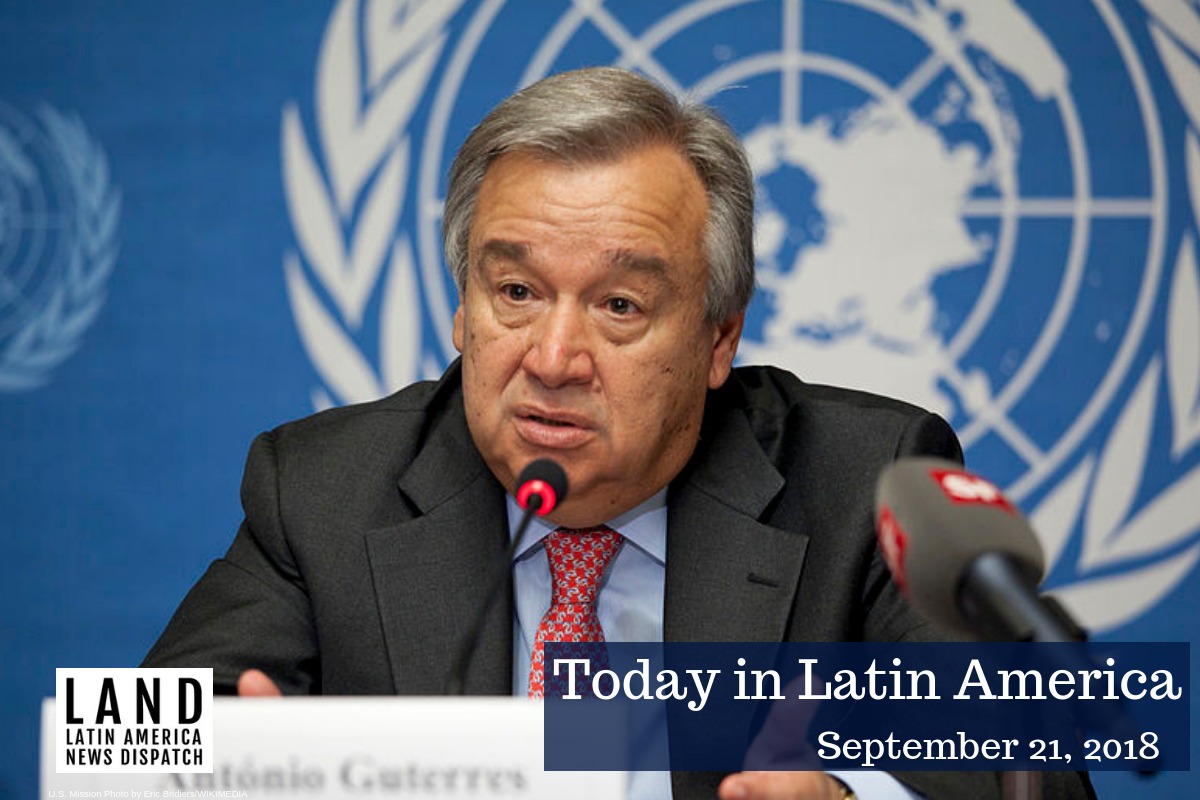 GUATEMALA: After a two-day standoff, Secretary General António Guterres reaffirmed his support for the exiled chief of a U.N. commission tasked with investigating corruption in Guatemala. Guterres rejected Guatemalan President Jimmy Morales’ 48-hour ultimatum to assign a replacement for Iván Velásquez, reminding the president in a letter yesterday that the commission’s mandate does not require staffing input from national officials. “I see no reason to lose confidence in Commissioner Velásquez,” wrote Guterres. But, given that the former Colombian magistrate has not yet been allowed to return to Guatemala, Guterres did say he would ask Velásquez to appoint a deputy to oversee the commission, which is known by its Spanish initials, CICIG.

Demonstrations continued in Guatemala City Thursday, with thousands marching in the capital to protest Morales’ August decision to bar Velásquez from the country and allow CICIG’s mandate to expire next year. CICIG has developed a reputation for doggedly pursuing investigations into the country’s political and military elite, including Morales, who is suspected of campaign finance irregularity, and his family. On Sunday, the Constitutional Court ruled against Velásquez’s entry ban, but Morales has so far refused to adhere to the ruling, provoking what some have characterized as a constitutional crisis.

MEXICO: President-elect Andrés Manuel López Obrador spent three hours trapped on a plane yesterday on his way back to Mexico City from the southern state of Oaxaca. As a candidate, López Obrador had promised to cut back on wasteful spending by selling the presidential plane and hiring civilian bodyguards instead of secret service agents. Despite the delayed flight, he still plans to fly commercial once in office.

MEXICO: A now-infamous refrigerated truck was in fact carrying 273 corpses from an overwhelmed morgue in the Pacific state of Jalisco, federal officials said late Wednesday. Original reports had placed the number of bodies at 157. Authorities said 122 additional deceased persons were being kept in a separate truck outside the morgue, which surpassed capacity due to an uptick of alleged cartel violence and stricter protocols for identifying bodies.

TRINIDAD AND TOBAGO: Opposition leader Kamla Persad-Bissessar denounced the disappearance of potentially incriminating documents regarding a “fake oil” scandal at a closing state-owned petrol refinery. The documents “have gone missing and/or are being removed and systematically destroyed,” she wrote Thursday, in a letter asking Trinidad and Tobago’s police commissioner to continue pursuing criminal investigations. Persad-Bissessar first exposed the $100 million billing discrepancy at the Petrotin refinery last year, after the board of directors announced it would be shutting down the indebted facility and laying off some 1,700 state employees.

NICARAGUA: Deputy Minister of the Interior Luis Roberto Cañas acknowledged yesterday that the government has imprisoned 204 protesters in relation to “acts of vandalism and terrorism.” In a televisión appearance, Cañas still denied claims of abuse, saying that the prisoners, who are being held as part of a broader crackdown on anti-government protests that began in April, receive medical care and access to visits.

PERU: The majority opposition Congress approved an anti-corruption referendum late Wednesday under intense pressure from President Martín Vizcarra. Vizcarra had threatened to exercise his constitutional power to dissolve the legislative body if it did not allow the December referendum to move forward. Three former presidents, including Vizcarra’s predecessor, have been implicated in the international Odebrecht corruption scandal, and Peru’s judicial branch has been in a “state of emergency” since July, following the release of tapes revealing a high-level bribery racket.

COLOMBIA: Three Colombian workers were executed in an armed incursion into a Canadian gold mining camp early Thursday. The attack, which authorities say was carried out by a dissident faction of the demobilized Revolutionary Armed Forces of Colombia rebel group, also injured three Continental Gold workers. An additional worker is unaccounted for. Earlier this month, a similar attack, also in the northern Andes range, was carried out against the same company, killing one worker and injuring another.

ARGENTINA: Security personnel committed more than 5,000 acts of mistreatment and torture against prisoners last year, according to a new report from the Prison Attorney General’s Office, an independent state agency tasked with defending the human rights of incarcerated persons. The report documented the complaints of nearly 1,500 prisoners and identified 11 forms of abuse, the most common of which were physical aggression and the deprivation of medical care.