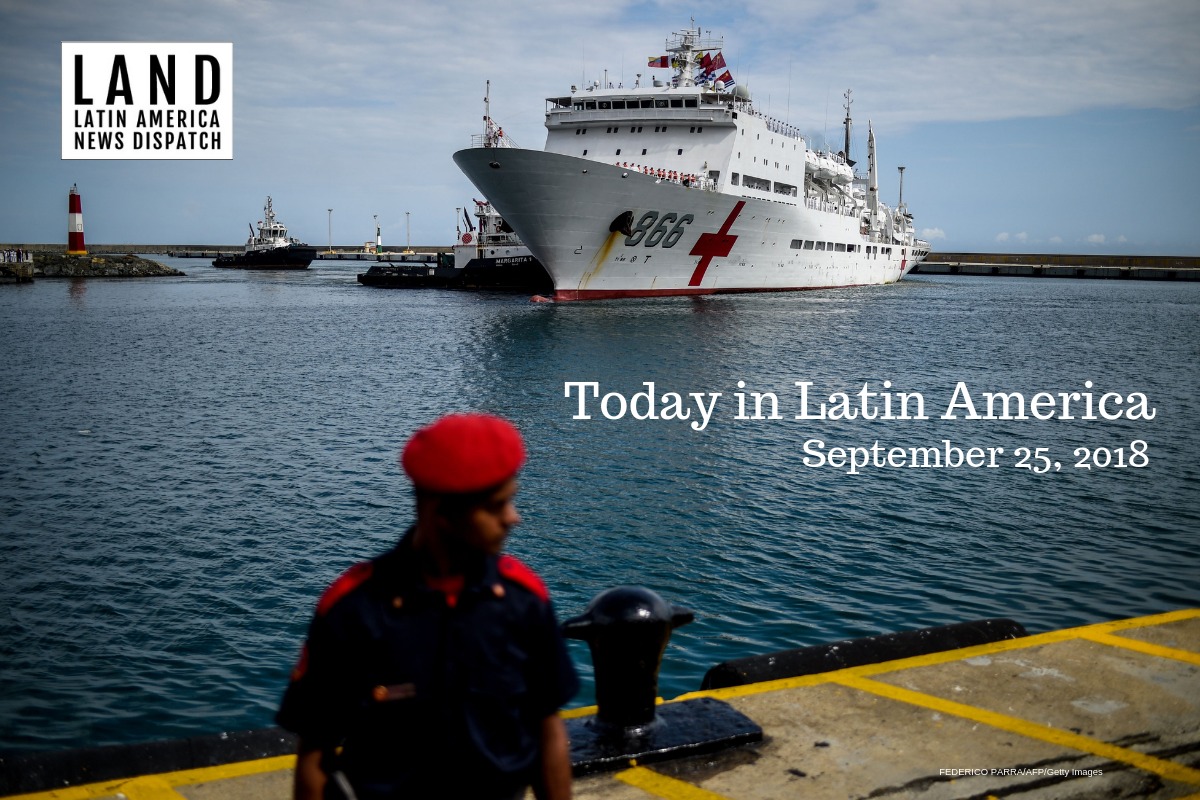 Venezuelan officials said they consider the U.S. ship deployment to Colombia a threat and a noticeable intent for military intervention. As tension between the nations continues, both Maduro and President Donald Trump will make speeches at the United Nations General Assembly this week in New York.

MEXICO/COLOMBIA: The former presidents of Mexico and Colombia criticized the current approach to the war on drugs, calling on a transition to legally regulated drug markets. Former Mexican president Ernesto Zedillo said that the current prohibition has done a lot of damage, while Colombian ex-leader César Gaviria described it as a “nightmare” for Mexico, Central America and Colombia. The statements accompanied the release of a report by the Global Commission on Drug Policy, which states that current drug legislature has resulted in militarization, mass incarceration and broken communities.

MEXICO/CHILE/COLOMBIA: Mexico, Chile and Colombia denied forming part in the attempted assassination of Venezuelan President Nicolás Maduro. Venezuela’s government previously stated that embassy staff from these countries working in Caracas were involved in the attack. On August 4, two drones carrying explosives went off near the Venezuelan leader as he spoke at a military event. He was not hurt.

MEXICO: The mass graves discovered early September in the coastal state of Veracruz hold children’s remains along with adults’, adding another example to the rising brutality of violence in the country. In prior years, criminal gangs used to spare women and children. The National Commission of Missing Persons posted hundreds of images of clothing online so relatives of the disappeared could search and try to identify a familiar item. Since authorities announced the illicit burial pits, the body count has risen to 174.

DOMINICAN REPUBLIC: The rate of murders against women by current and former partners continues to rise, especially in the northern part of the country. According to government statistics from the area, 35 women have been killed. In nine of those cases, the murderer killed himself after committing the crime. Women’s advocates say the femicide count leaves out many cases of violence against women, so the real amount of deaths is likely higher.

PUERTO RICO:  Members of Puerto Rico’s Senate objected to another round of comments from President Trump, who said in an interview that statehood is “an absolute no” because he views politicians like San Juan mayor Carmen Yulín Cruz as “incompetent.” Puerto Rico’s Senate President Thomas Rivera Schatz said Trump’s statements should not discourage pro-statehood supporters.

“This won’t be his last controversial statement,” the pro-statehood senator said.

NICARAGUA: A teenager was killed and several people injured at a protest against President Daniel Ortega in Managua. According to police, 16-year-old Max Romero was caught in the “crossfire” after protesters threw rocks at homes. Romero is one of the more than 320 people who have died since violent protests started in April. The U.N. Human Rights Council has spoken out against the violence caused by pro-government paramilitary groups.

EL SALVADOR:  Authorities announced that Interpol will not issue a red notice against fugitive ex-president Mauricio Funes, who is accused of embezzlement. A judge issued national and international arrest warrants while Salvadoran authorities petitioned for Funes’ extradition as well as his wife and two sons. They currently have political asylum in Nicaragua. The scandal involves the Funes family and 14 others who allegedly stole $351 million in public money.

VENEZUELA: A Venezuelan journalist has been released after he was arrested at Simón Bolívar Airport and held for more than eight hours. Isnardo Bravo planned to leave the country with his 11-year-old daughter when he was allegedly told he was banned from leaving the country, prompting authorities to arrest him and seize his passport.

BRAZIL: New poll results released Monday show that support for Brazil’s Workers’ Party candidate Fernando Haddad has increased to 23 percent, suggesting the race will go to a second round of voting. Right-wing candidate Jair Bolsonaro has led the polls with 33 percent of support. Haddad entered the race after replacing imprisoned ex-president Luiz Inácio Lula da Silva. The replacement candidate increased his polling by seven percent compared to last week. The election will take place on October 7.