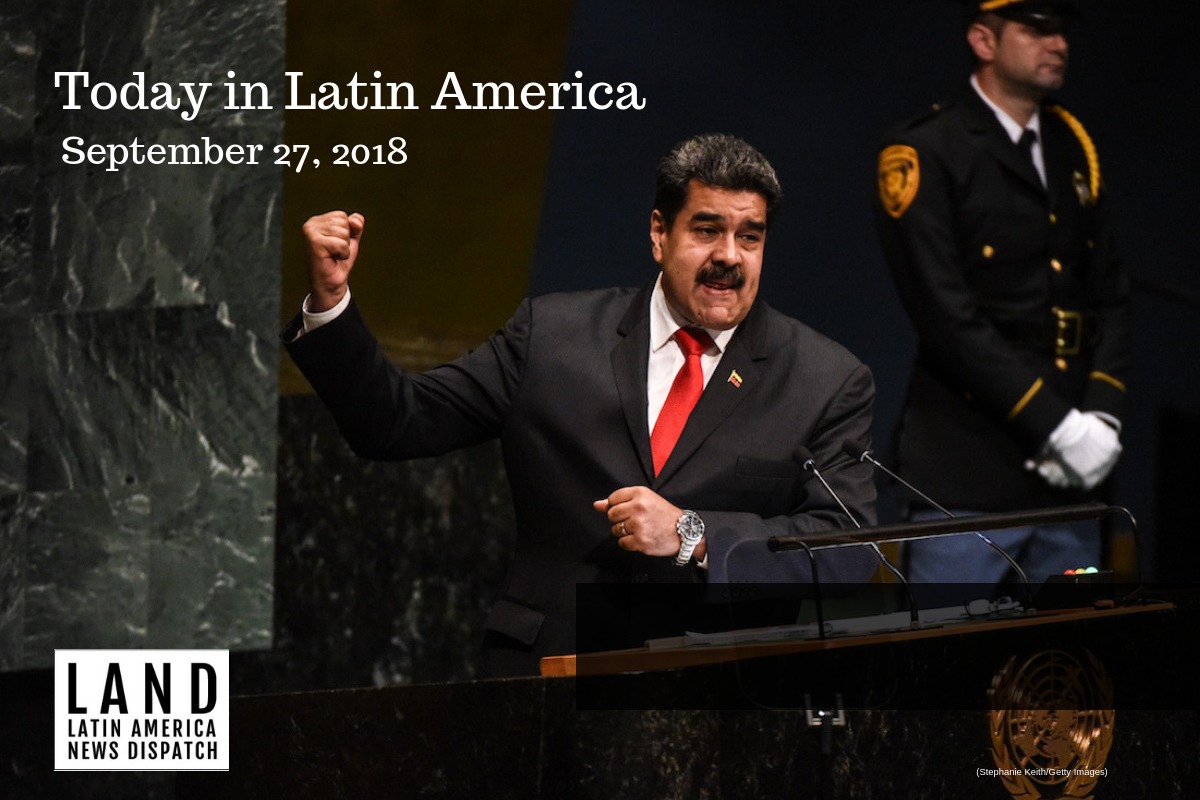 VENEZUELA: On the sidelines of the United Nations General Assembly Wednesday, five South American presidents and the Canadian prime minister met to sign a joint letter referring Venezuela to the International Criminal Court. Speaking from the floor of the General Assembly, Colombian President Iván Duque, one of the letter’s signatories, insisted that “the end of the dictatorship, the return of democracy and outright freedom is the only possible path.” Other signatories included the right-leaning leaders of Paraguay, Argentina, Peru, and Chile.

The move came just a day after U.S. President Donald Trump suggested that President Nicolás Maduro “could be toppled very quickly” in a military coup. Trump later said he would be open to meeting with Maduro, who announced Wednesday that he would be making a surprise appearance at the international gathering in order to “defend the truth.”

Despite the U.S.’s “permanent aggression” against his country, Maduro told a small audience at the close of Wednesday’s assembly that he was willing to “shake hands” with President Trump and discuss an “open agenda.” Earlier in the day, Cuban President Miguel Díaz-Canel, one of Maduro’s few allies at the Assembly, reiterated his “absolute support” for Venezuela in the face of U.S. efforts to “economically suffocate it” with new sanctions.

MEXICO: Mexican President-elect Andres Manuel López Obrador said Wednesday that his government will accept a truth commission to investigate the case of 43 students who went missing on September 26, 2014. The students’ bodies have never been found but prosecutors allege that the police turned the students over to a drug gang, which they say murdered them and burnt the bodies.

PUERTO RICO: Mainland companies have received 90 percent of the federal funds for reconstruction in Puerto Rico, a total of $4.3 billion, in spite of a federal provision that states local companies should receive priority, according to a study released by the Center for a New Economy. From the 45 federal agencies with reconstruction-related contracts, 24 haven’t signed with any company in the island.

GUATEMALA: President Jimmy Morales and U.N. Secretary-General António Guterres held a meeting in an effort to restart dialogue, after Guatemala’s government requested a new person to be appointed as head of the U.N.-backed anti-corruption commission in the country. Chancellor Sandra Jovel said there’s good will from both parties to keep working together.

NICARAGUA: The Senate Foreign Relations Committee of the U.S. approved targeted sanctions on Nicaraguan government officials they feel are responsible for human rights violations in the country. The bill also suggests restrictions on lending by international financial institutions.

COLOMBIA: Colombian former guerilla leader Omaira Rojas was arrested for money laundering upon arriving in Bogotá after returning from serving prison time in the United States for drug charges. Colombia’s 2016 peace deal offers some protection for guerrilla members but as Rojas was in prison, a judge will now have to decide if she is absolved from previous charges filed against her in Colombia.

ARGENTINA:  The IMF agreed yesterday to increase a lending package to Argentina by $7.1 billion to a total of $57.1 billion. Argentina has been experiencing economic turmoil and devaluation of its peso as it is struggles to meet its debt. Recent austerity measures have been met with civil unrest and protest. Luis Caputo, governor of Argentina’s central bank, resigned on Tuesday for personal reasons after taking the position in June.