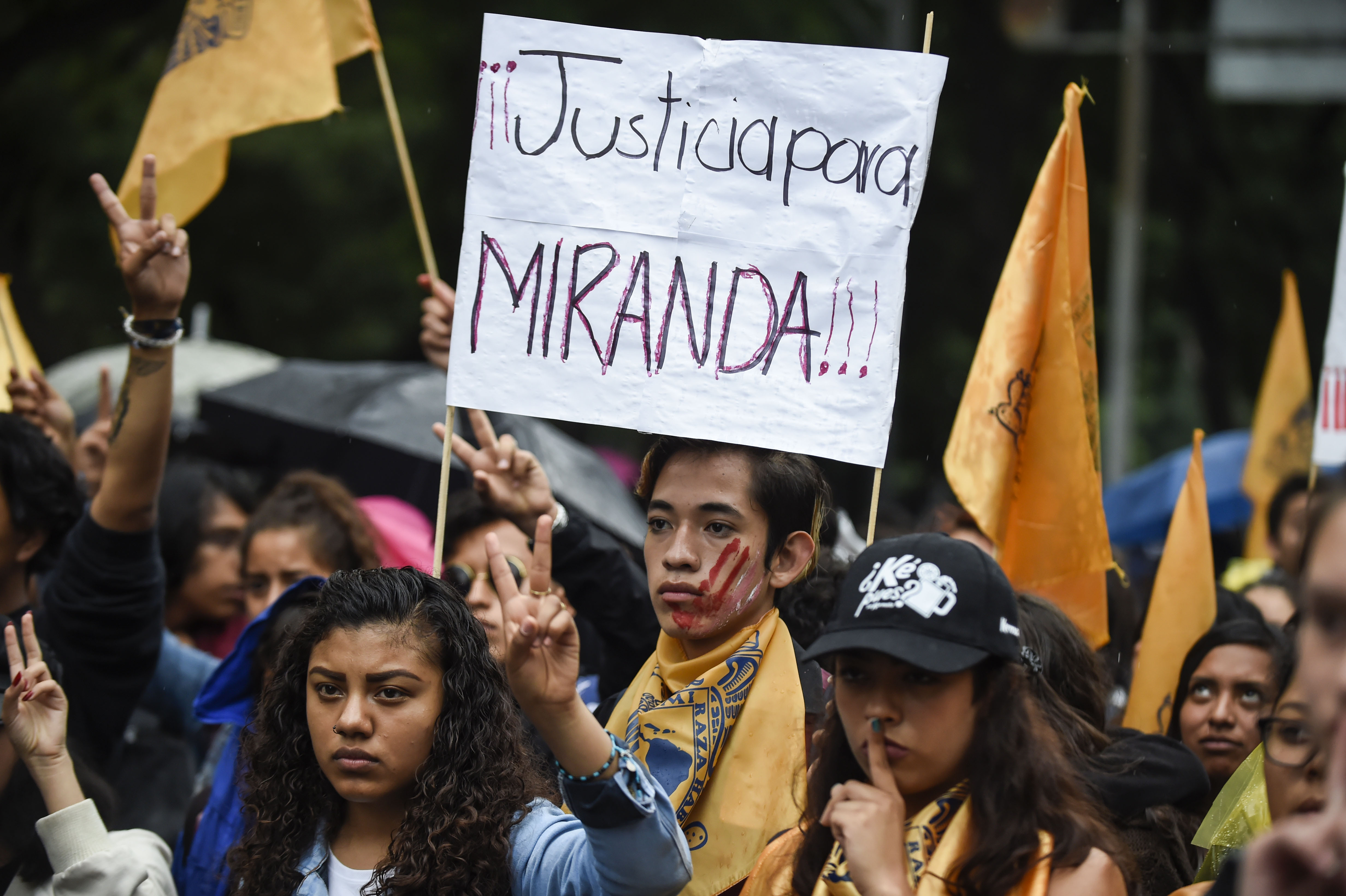 University students demonstrate against the recent attacks by "porros" in Mexico City, on September 13, 2018. (Photo by Alfredo Estrella/AFP/Getty Images)

Photos posted on social media show men attacking one of the students, Joel Meza, who was hospitalized with a punctured liver and severed ear.

Meza’s sister, Andrea, implored the university provost to expel the porros from the campus and for those responsible for the violence to be prosecuted. The provost, Enrique Graue, condemned the violence and expelled 18 students allegedly involved in the attacks. But the measures fell short of student demands for Graue’s resignation and the expulsion of all porro groups from the university. When not enough action was taken, protests against the porros started on September 5 on the UNAM campus.

Porros, who date back to post-revolutionary Mexico, have been a menacing but elusive presence in Mexican popular protest. The recent violence has sparked a national debate about the groups’ backers and history at a time when the majority of Mexicans anticipate sweeping political change under the incoming president. Andrés Manuel López Obrador has promised to eradicate the groups once he’s sworn in later this year. Not only that, but October 2 is also the 50th anniversary of the 1968 student protests and subsequent massacre in Mexico City’s Tlatelolco Square. Students in the capital are planning a commemoration march on the date again this year, an annual tradition that draws thousands of protestors.

Leslie Lopez, a political anthropologist and professor of Mexican politics at UC Santa Cruz, likens porros to goon squads hired by corrupt tribal governments during the American Indian Movement when leaders would hire enforcers to go out and beat up, harass and threaten independent organizers.

“It’s an apt term because one thing that’s very scary about porros is that these people are students that are recruited by authorities to do that, to threaten, to enforce, to terrorize fellow students,” Lopez told Latin American News Dispatch.

These are usually young men that register in schools but are absent in school life and classes, reappearing to violently break up protests. Many experts say they have the backing of governmental authorities intent on quelling student protests. Imanol Ordorika, a Mexican academic that has studied porros, writes that they originated from a mix of student gangs and American football teams aligned with authoritarian political figures.

In the view of Iván Eliab Gómez, porros are an indicator of Mexico’s persistent corruption. Gómez, a social science professor at the National Autonomous University, calls the use of criminal shock groups an “archaic strategy of government rule far removed from the rule of law.”

Lopez added that Mexico’s universities became training grounds for the political system and the use of porros represents the most noxious elements of Mexican politics.

In 1968, student resistance to escalating repression from the PRI government resulted in mass protests across Mexico City that authorities repressed on October 2 of that year. Only days before the start of the Olympic Games in the capital city, dozens of students were gunned down in violence reporters at the time attributed to a paramilitary group known as the Olympia battalion, organized under the authority of then interior minister, Luis Echeverría.

In 1971, a mixed paramilitary group of former soldiers and criminals, known as halcones attacked students with bamboo canes and knives. The Mexican daily Proceso reported that hundreds may have been killed.

Elegio Riveros, a journalist in Veracruz, was a college student in Mexico City after the 1968 student protests and has followed violence against students by these groups for decades. Porros, he said, are traditionally associated with the PRI party that ruled the country for 70 years before making a short-lived comeback with outgoing president Enrique Peña Nieto’s election win in 2012. “We are witnessing the majority of students refusing to accept their presence on campus,” he said, drawing parallels between the 1968 student protests and the current wave of marches and rallies.

López Obrador’s election has given rise to great expectations for democratic change. Riveros said students hope to take advantage of the moment to win their fight to bring democracy into Mexico’s schools. In a video posted on Twitter, López Obrador said he supported the student protests to end the violence at UNAM.

He also said he supported legal action against porros, while respecting the autonomous nature of the university. The incoming president had previously said that during his administration he wouldn’t permit “vandalism and violence against students” but has not said how he would go on stopping the groups.

“Ridding Mexico’s universities of porros would satisfy a decades-long demand by students to bring democracy and liberty into their schools,” Riveros said, adding that if López Obrador makes good on his promise to eradicate the groups he would provide an early litmus test for his administration’s promises for sweeping change.

On September 13, students in Mexico City marched to protest the violence and commemorate the 1968 “march of silence,” a demonstration that challenged the federal government’s intransigence to address student demands.

“There have been other moments when the majority of Mexico stood up and said no more, including 1968. This is partly why it’s so poignant and exciting,” Leslie Lopez said about the marches. “UNAM was the epicenter of that moment 50 years ago and I think students right now are feeling the weight of symbolic duty.”