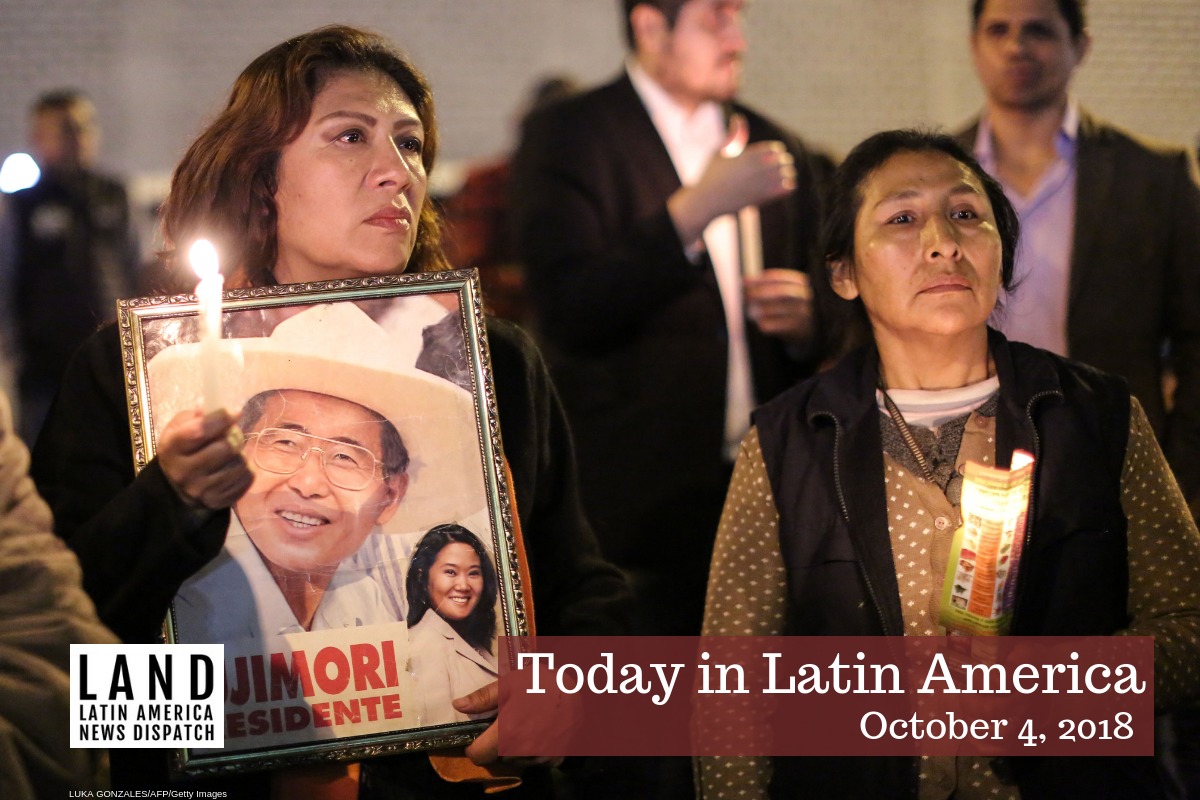 PERU: The Supreme Court annulled the controversial 2017 pardon of former President Alberto Fujimori, handing down a new “location and capture” order that would have the 80-year-old dictator complete a 25 year sentence for corruption, authorizing death squads and rigging elections.

The 2017 humanitarian pardon was granted for health reasons but in a 225-page ruling released yesterday, the court found that former President Pedro Pablo Kuczynski not only failed to follow proper procedure but also lacked sufficient power to pardon crimes against humanity. It was widely suspected at the time that Kuczysnki, who was forced to resign three months later, had issued the pardon as part of a backroom political deal to stave off his own impeachment.

His supporters and family promised to fight back. “This is persecution against my family,” said a weeping Keiko Fujimori, Alberto’s daughter and political successor, calling the day “one of the saddest” in her life.

DOMINICAN REPUBLIC: The Supreme Court of Justice restarted the hearings against seven public officials accused of receiving a $92 million bribe from Brazilian company Odebrecht. The trial was paused in August so the defense could have time to analyze the evidence. The accused are charged with accepting the bribe in exchange to grant Odebrecht with public infrastructure contracts. Odebrecht reached an agreement with the General Attorney’s office to pay $184 million as a sanction for the bribes.

GUATEMALA: The U.N. announced that Iván Velásquez will remain as head of the International Commission Against Impunity in Guatemala, while they work in naming an adjunct commissioner. Hours before, President Jimmy Morales said there was an ongoing dialogue with the UN to name the substitute for Velásquez.

PARAGUAY: Brazilian police intelligence led to the shut down of the construction of a tunnel to a Paraguayan prison by individuals associated with Primeiro Comando da Capital (PCC), Brazil’s biggest criminal organization which also operates in Paraguay and Bolivia. Officials estimated that as much as 80 inmates could have escaped the prison in the city of Pedro Juan Caballero had the operation not occurred.

COLOMBIA: Three agents have left the DEA’s flagship Bogota office in recent months amid internal investigations into alleged intelligence-sharing with drug traffickers and the use of agency resources to hire sex workers. The departures, revealed in an Associated Press report yesterday, come three years after a major prostitution scandal roiled the Colombia office.

CHILE: The archbishop of the Chilean capital, Cardinal Ricardo Ezzati, was seen smiling as he entered a local prosecutor’s office yesterday where he declined to testify as a defendant about to answer to allegations he covered up years of child sex abuse committed by clerics and officials of the country’s Catholic Church.

ARGENTINA: After days stranded on a resort beach along the southern coast, a seven-ton humpback whale swam out to sea yesterday. The whale washed up on Saturday and was freed by an intensive non-stop rescue effort that employed heavy digging equipment.

ARGENTINA: The Argentine peso reacted positively to a monetary policy change by the country’s central bank. As of October 1, the central bank abandoned its inflation target to instead focus on stopping the growth of the money supply while also draining the peso from the financial system. Some observers feel that this policy must be kept in place in the foreseeable future in order to begin to bring down inflation.