I meet Manny Olivares at 6:30 in the morning, right before his shift at a Crate & Barrel warehouse in California’s Central Valley. He’s sitting in his car, a Chrysler 300, which he modified himself. He’s taking a minute and eating an English muffin.

“I always keep it chill in the morning because if I eat too much, my stomach hurts so I have to stop working,” he laughs.

Manny has a sweet smile and a tattoo of his last name across his forearm. He just graduated from high school this past year, but he’s already got a full-time job working as a warehouse “picker.” Being a “picker” means he helps fulfill online orders for Crate & Barrel. Whenever anyone orders a couch or lamp or end table, it’s his job to take an order picker machine, like an electric lift, and retrieve the items. It’s designed to reach the highest shelves in the warehouse, six stories high.

“The only gear I bring is a box cutter, a pen and that’s pretty much it. Oh, and gloves because it’s a really dirty place. A lot of dust collects at the very top of the racks. When I’m picking items, I’ll just lean over and like my whole arm is black,” he says.

The warehousing industry is an almost invisible part of the U.S.’s supply chain but it’s also one of the fastest growing parts of our economy. Warehouses, however, are not exactly a brand new industry. After World War II broke out, Americans developed a warehouse system in order to quickly move goods overseas. But now warehousing is booming with the rise of e-commerce, and is increasingly about fulfilling online orders. The Commercial Real Estate Group estimates that over the next two years, the warehousing industry needs to hire over 400,000 workers to keep up with demand.

According to data from the Community Service Society of NYC, many of those jobs are held by Latino. Currently, 41 percent of 18-34-year-olds working as hand-packers and packagers, one of the most common jobs in the industry, are Latino. And 35 percent of those Latino workers live in California. 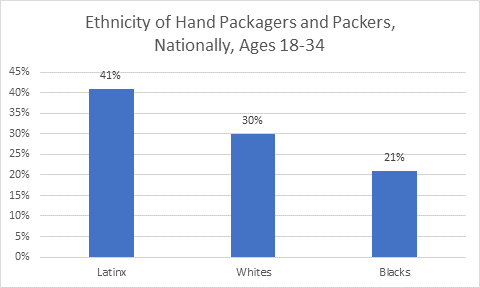 For young people like Manny, these jobs are attractive. They pay better than fast food jobs, and they’re not as rigorous as working outside. When Manny was younger, he worked picking peaches in the fields. “It’s the heat that really blasted your brain,” he says. Before he found out about warehousing, he was looking at maybe going into construction. He had family members already doing it. 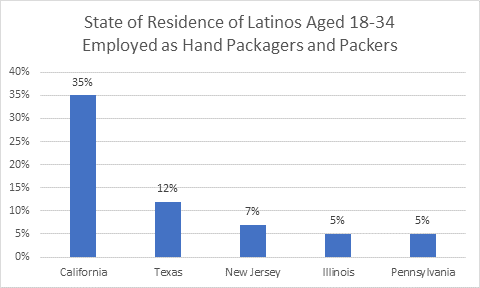 But then Manny took a class at Patterson High School that changed his trajectory. Patterson is in the Central Valley. It’s a city surrounded by orchards and fields. The local paper is even called the Patterson Irrigator. It’s known as the “Apricot Capital of the World” and in the 70’s, 40 percent of the nation’s apricots were grown there.

After watching this shift away from agriculture jobs, Patterson High School spent $2.5 million on a 10,000 square foot mock warehouse on the school’s campus. With conveyor belts, a robotic arm, and virtual reality forklifts, it is a high tech space meant to teach high school students what it’s like to work in a real warehouse. Students at Patterson can take an “Introduction to Logistics” class and learn how to drive a forklift.

In the virtual reality forklift class, 16-year-old Jacqueline “Jackie” Mendoza settles herself in the forklift chair. They look like arcade games with Oculus Rift headsets. There are even speakers by her ears that rumble and beep.

“It’s pretty dizzy honestly. I feel like I’m going to throw up, but I gotta get used to it,” she says.

Patterson High School is about 70 percent Latino. It’s a low-income community, with 75 percent of its students on reduced and free lunch, so a warehouse job that pays $11-$16 per hour right after graduation is attractive. 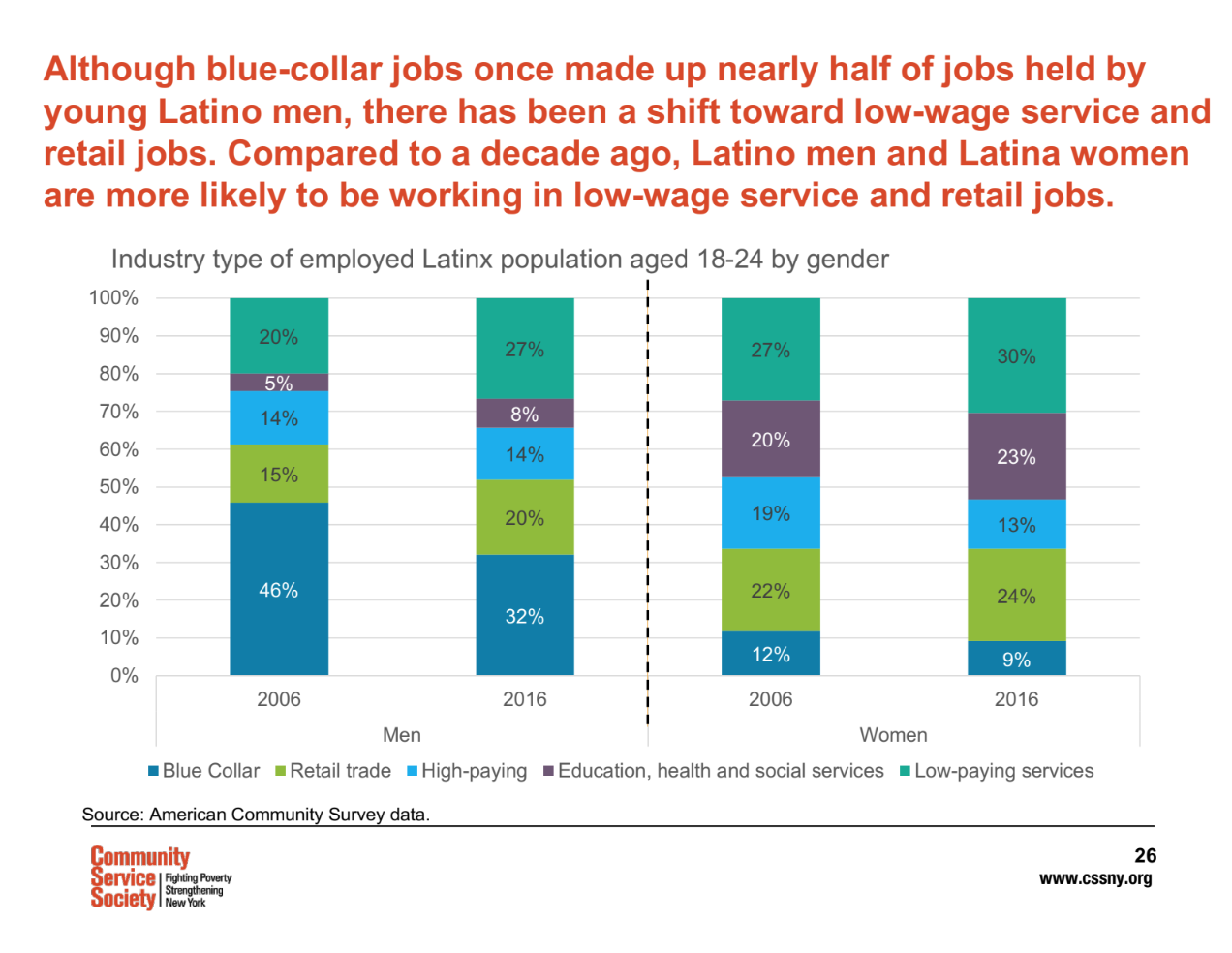 However, the future of job growth in the warehousing industry may not be so certain, as automation develops. For the last three years, Amazon has held an international contest where teams try to design a robot that can pick up and put down items. “Picking” is something that’s surprisingly difficult for a robot to do and is the biggest labor cost in most warehouses that deal with e-commerce.

The Amazon warehouse in Patterson opened in 2013. When I visited, once a guard lets me in, I realized it was break time. Tons of employees were streaming out through the airport security-style scanners. In this 1 million square foot building, 800 people work alongside various types of robots.

When you order an item online, it passes through the hands of several “associates” (as Amazon calls their workers), who work in concert with several machines. There are Automatic Guided Vehicles, basically, unmanned forklifts loaded up with items that follow a map of the warehouse floor programmed into it. Amazon also has Kiva robots—they look like big orange Roombas, with a set of shelves on top. There is also a giant robotic arm that picks up pallets and moves them from one floor to another. And one of the final steps for each package that moves through the warehouse is when it gets a shipping label, placed not with human hands but with a puff of air from a machine.

Beyond automation, there are other concerns for warehouse workers. This year, Amazon filed a report that showed their employees median take-home pay was $28,446. And public records show thousands of Amazon employees are on food stamps. Amazon says these figures are “misleading” because they include people who only worked there for a short period of time or worked part-time. In 2011, Amazon made headlines when they forced workers in a Pennsylvania warehouse to continue working in over 100-degree weather, sometimes to the point of collapse. Since then, Amazon says they’ve changed their policy to allow workers to go home when heat is excessive. Most recently, Amazon has responded to criticism of its working conditions by politicians and the press, and announced that their minimum hourly wage will be $15 across all jobs.

According to Celene Perez, co-executive director of the Warehouse Workers Resource Center, working conditions in warehouses are difficult to remedy because warehouse workers are often hired as temp workers, and so there’s a lot of turnover. She says that makes it difficult for them to organize if they have concerns. There are no unionized Amazon warehouses in the U.S.

The temp agency industry is one of the fast-growing industries in the economy along with warehousing, and a lot of companies use temp workers because it’s much cheaper. Companies like Amazon temporarily hire hundreds of thousands of seasonal workers for the holiday rush every year. The temp agencies provide a steady stream of labor to warehouses that don’t have to worry about recruiting workers or managing them, and in exchange, they take money out of each worker’s hourly wage. Temp workers also have reported to the Warehouse Workers Resource Center that they also have to fight for their hours, sometimes only working just one full week a month or getting called in only to be sent away without pay.

But Perez says it is possible to make warehouse jobs less exploitative.

“Everyone tries to talk about the heyday of manufacture jobs and we have to bring manufacturing back, which I don’t think is realistic. But it’s also remembering folks say those were great jobs, but they weren’t initially. There was a long fight to make manufacturing jobs good jobs and to lift standards.  So I believe we have to do the same thing for warehouses. They aren’t going away. We are seeing an increase in e-commerce, so they are going to continue. They’re not great jobs. But we need to make them great jobs.” says Perez.

When many people say a great job, they generally mean a middle-class job. These days, a middle-class job really varies in definition. A middle-class income for California last year was considered between $45,000–$135,000, a huge range. The Southern California Association of Governments estimates that, at least in California, warehouse workers earn the very bottom of that middle-class existence, on average $45,000 annually. But a professor at the University of Southern California, Juan de Lara, argues that those numbers are misleading. He found that, because companies use third-party logistics companies and temp agencies, in reality, warehouse jobs actually offer up more like  $22,000 a year on average ($19,000 if you’re a woman). 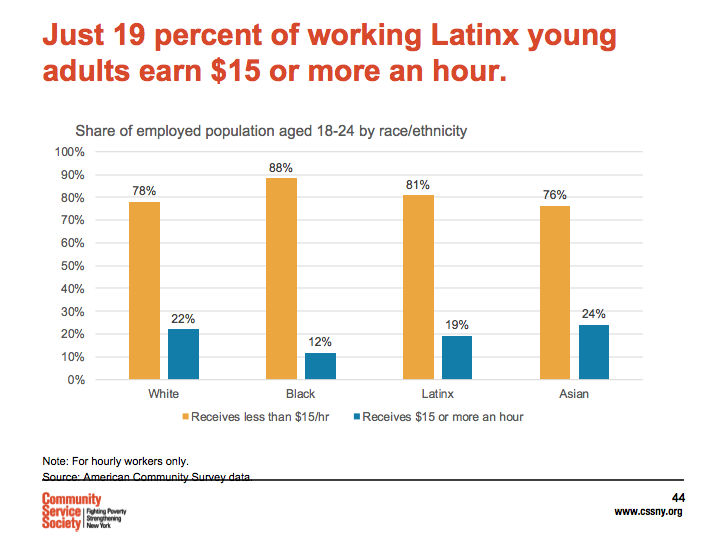 Back at Patterson High School, teachers tell me that even though they’ve invested in this mock warehouse, a warehouse job is not necessarily the end goal. They tell me they want students to get promoted from an entry-level position or use the job to pay for college. Hilario “Larry” Garcia teaches the forklift classes. He’s been working in the warehousing industry for over 25 years. Larry tells me his goal is to definitely keep students away from temp jobs by leveraging contacts in the industry: “They will start as entry-level position, but their progression as they get higher up in the industry, will move that much faster. We’re trying to get them in as full-time, permanent full-time with benefits from the get-go.”

Larry grew up in nearby Merced. As a young man back in the 80’s, he got his first job on the night shift at a large printing warehouse in the area, and he’s worked his way up to do pretty much every job in the industry—loading, driving, training. However, after decades in the industry, he was unceremoniously pushed out.

“In my personal experience, I was just a number,” he says.“Twenty-one years after I was in my one company I was working with, they basically gave me an offer, either go to a permanent night shift or take a severance package. So I took a severance package and went somewhere else.”

However, Larry still believes giving kids like Manny Olivares —the former Patterson student— these skills will enable them to get started, and then start to move up. After his shift ends at Crate & Barrel, I meet up with Manny again. He’s a little tired. Every day when he gets home, he has to recharge quickly and then get ready for night school. He’s working full-time right now and going to class four nights a week at a community college. His dream is to one day go to a four-year college, to Cal Poly, specifically.

“It’s a famous engineering school… I want to be a civil engineer,” he says.

He wants to buy house one day—a two-story house. “Or even a nice one story, but I want to live on a ranch having a good plot of land. Hopefully have a boat!” he says.

Manny’s job as a warehouse picker has been good for him for now, but it’s just a stepping stone, a hustle. It’s not going to provide the future he’s seeking for himself.

The full data study by Community Service Society of New York to support this Latino USA story can be accessed below:

This segment was reported using research conducted for Latino USA by the Community Service Society of New York. You can find more information about these trends at CSSNY's site.

Latino USA is made possible in part by Deutsche Bank Americas Foundation.