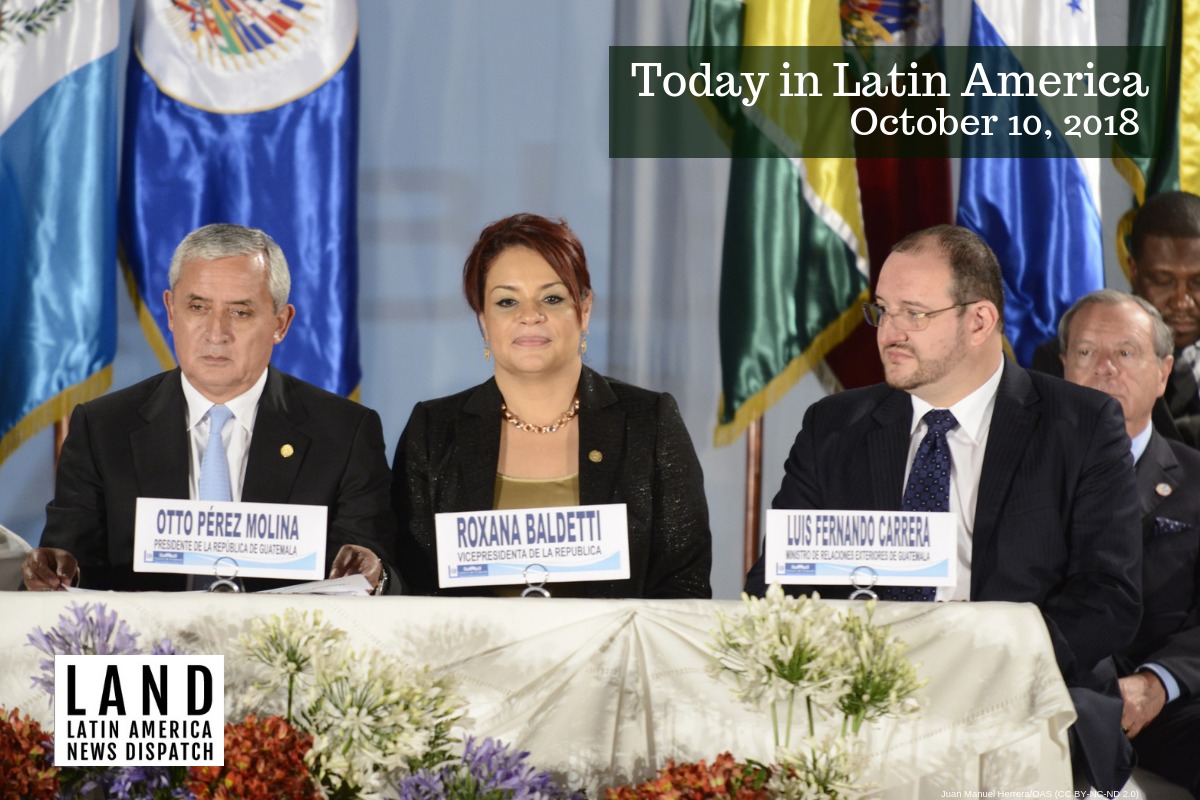 Former Guatemalan vice president Roxana Baldetti, center, was sentenced to more than 15 years in prison for her role in a fraud scheme. Photo by Juan Manuel Herrera/OAS (CC BY-NC-ND 2.0)

GUATEMALA: Roxana Baldetti, the former vice president of Guatemala, was sentenced to more than 15 years in prison yesterday for her role in a fraud scheme involving the decontamination of a lake, thanks to the work of public prosecutors backed by the United Nations anti-corruption commission in the country, known as CICIG.

Baldetti and 12 other defendants were found guilty of conspiring to grant an $18 million contract to an Israeli company to clean the polluted lake, but the company cleaned it using only water, salt, and chlorine. She was charged with illicit association, fraud and influence peddling. Mario Baldetti, the brother of the former vice president, was found guilty of controlling the bidding process in which the company won the contract. Businessman Uri Roitman, who created the “magical formula” to clean the lake, was sentenced to nine years in prison and will be processed for money laundering.

Roxana Baldetti and former President Otto Pérez Molina were forced to resign in 2015 amid a corruption scandal. Molina is currently awaiting trial in jail. Iván Velásquez, head of the CICIG, celebrated Baldetti’s sentence on Twitter: “The fight against corruption and impunity IS possible!” he tweeted. The case against Baldetti was presented by the commission.

THE U.S.-MEXICO BORDER: An AP investigation released yesterday found that holes in the legal system allow state court judges to grant custody of migrant children to American families without notifying the children’s parents. The problem arises from a separation of state and federal jurisdiction. While the federal system that oversees the migrant children does not permit adoption, each state court system runs wardship and adoption proceedings differently. State courts can grant guardianships to foster families as well as adoptions, but federal agencies say this should never be allowed.

UNITED STATES: Hurricane Michael gained strength ahead of its expected landfall today. Forecasters are warning that it could hit Florida’s Gulf Coast as a “dangerous major hurricane” within days. Gov. Rick Scott declared a state of emergency for 35 Florida counties and activated hundreds of Florida National Guard members.

MEXICO: Speaking at an event yesterday inaugurating new military installations in Quintana Roo, President Enrique Peña Nieto said that he would stay in Mexico after his presidency. He described rumors that he would leave the country as tall tales, or “cuentos chinos.” He also stressed that as an important tourist center, the state of Quintana Roo must have optimal security protections, which was the motivation for the new facilities.

HAITI: The death toll from the 5.9-magnitude earthquake that struck Haiti this weekend has risen to 17, with 333 people injured, according to the latest assessment by the Directorate of Civil Protection. An estimated 7,783 families are in need of urgent humanitarian assistance. The areas most impacted by the earthquake are in the north, northwest and Artibonite departments of the country.

COSTA RICA: A month into a teacher’s strike in Costa Rica that has closed more than half of the country’s education centers, a judge ruled the strike illegal and asked for a $1,702 penalty fee. After the ruling was announced, the Minister of Education called on the striking teachers to return to classes today. The union will appeal the judge’s decision. The teachers protested in the country’s capital yesterday to mark the 30 days of the strike.

VENEZUELA: The United Nations will investigate the death of Fernando Albán, a Caracas city council member accused in the failed drone attack against President Nicolás Maduro in August. Albán reportedly committed suicide Sunday ahead of a court hearing, according to Venezuelan officials. Josep Borrell, Spain’s Minister of Foreign Affairs, has also called for an independent investigation.

BRAZIL: Fernando Haddad’s campaign blamed his opponent, Jair Bolsonaro, for spreading fake news about him leading up to Sunday’s election. Haddad accused Bolsonaro’s campaign of disseminating the message that Haddad planned to  “shut down churches and distribute textbooks teaching children to be gay.” Haddad’s campaign removed 33 videos from online websites, including one that had racked up 3 million views. When asked to sign a joint-commitment against the publication of fake news, Bolsonaro called Haddad a “scoundrel”  and rejected the idea.

ARGENTINA: For the second time this year, the International Monetary Fund (IMF) forecast a reduction in Argentina’s economy in 2019. The IMF also predicts slower economic development in Brazil. Both prognoses will impact Latin America’s overall development, pushing the region toward becoming the weakest among emerging markets this year.