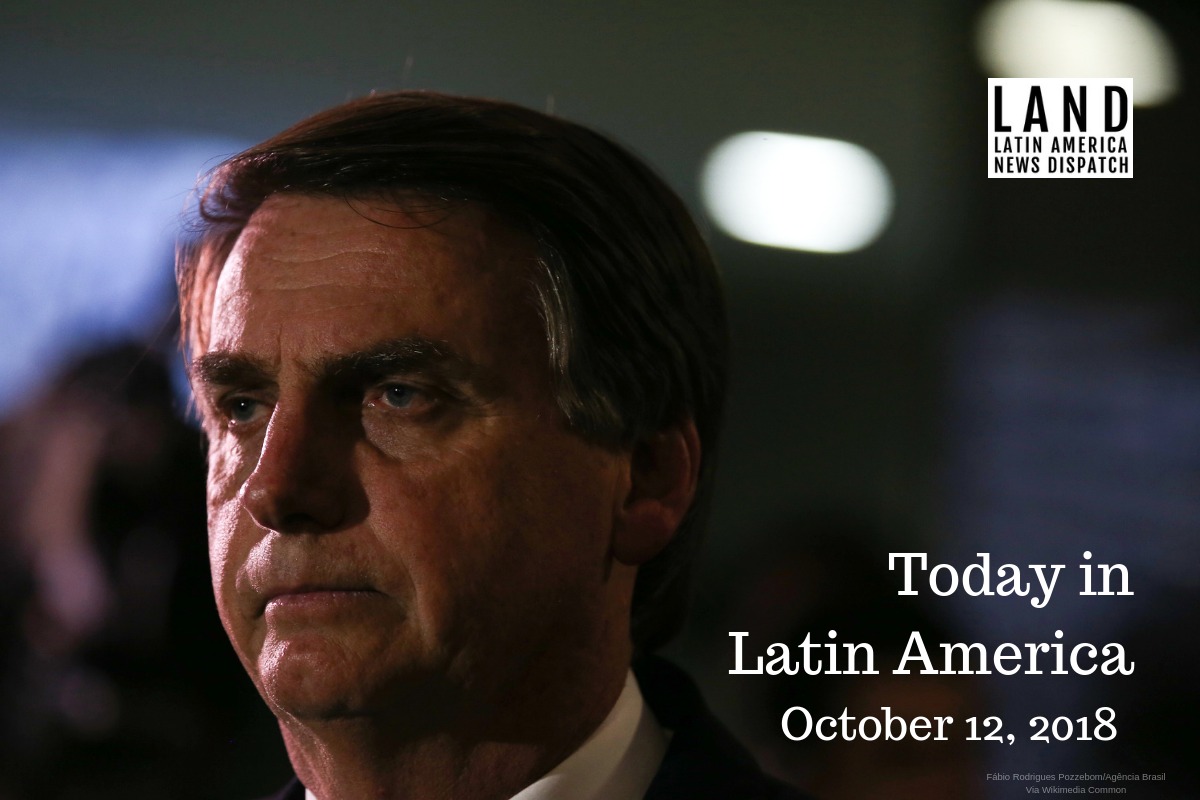 BRAZIL: Far-right presidential frontrunner Jair Bolsonaro enjoys a commanding 13 percent lead with less than three weeks to go until the October 28 runoff, according to a new poll from noted Brazilian firm Datafolha. Bolsonaro already obtained 46 percent of the vote in last Sunday’s first-round election, just four points shy of an outright victory. The new poll suggests his support may still be growing, with 49 percent of respondents indicating they intend to vote for the extremist retired Army captain over center-left former São Paulo Mayor Fernando Haddad.

On Wednesday, both candidates took to Twitter to urge their supporters to abstain from political violence, amid an escalation of such incidents across the country. Bolsonaro, who was stabbed during the campaign trail last month, has previously advocated for death squads, military dictatorship, and the assassination of political opponents. He also has, over the course of his career, expressed a wide range of racist, homophobic, and sexist opinions. Citing his ongoing medical recovery, Bolsonaro declined to participate in the first presidential debate of the presidential runoff last night.

UNITED STATES: Bolstered by his nearly 40 percent support among self-identified Hispanics, conservative Texas Senator Ted Cruz leads his Democratic opponent by nine points heading into the Nov. midterm elections, according to a new Quinnipiac University poll. The Texas race is one of several key contests across the country in which polling data suggest surprisingly steady Latino support for Republicans, despite President Donald Trump’s anti-immigrant agenda.

MEXICO: Experts President-elect Andrés Manuel López Obrador will attempt to enlist 50,000 new recruits in the Army, Marines, and Federal Police force upon taking office. López told the governor of the increasingly violent State of Mexico that security will be a top priority, overseen directly by the president. Several experts reacted approvingly to the announcement yesterday but warned that it will be expensive.

TRINIDAD AND TOBAGO: The state-run oil company Petrotrin can move forward with a planned termination of 5,000 employees after a high court lifted an injunction against the cuts. The injunction had been granted to the Oilfields’ Workers Trade Union, which argued that Petrotrin’s board of directors did not meet with the union ahead of its decision to shut down the company. The injunction will be appealed at a hearing next week.

REGIONAL: U.S. Vice President Mike Pence discussed immigration and drug trafficking with regional officials in Washington, D.C. yesterday, at the Conference on Prosperity and Security in Central America. Guatemalan President Jimmy Morales, one of two heads of state in attendance, took the opportunity to renew his attacks on the United Nations’ anti-corruption commission in Guatemala, claiming that international interference has taken away his “ability to act as president.”

COSTA RICA: For the first time since its northern neighbor entered into political crisis this year, Costa Rican granted asylum to a Nicaraguan claiming political persecution. Álvaro Leiva, the executive secretary of the Nicaraguan Association for Human Rights, had been in Costa Rica since August. In a statement to the press yesterday, the executive secretary of the Nicaraguan Permanent Commission of Human Rights celebrated the protective measure, saying that “In Nicaragua, security was not guaranteed, and threats were always present.”

VENEZUELA: In an attempt to quell accusations that the late Caracas Councilman Fernando Albán was tortured and murdered by the government, Attorney General Tarek William Saab said yesterday that the results of Albán’s autopsy can be audited by experts. Albán, whose funeral procession drew a large opposition crowd yesterday, had been accused of plotting a failed drone attack against President Nicolás Maduro and was being held by the presidential intelligence service when he died. Authorities insist that Albán took his own life by jumping from a 10th story window and that an autopsy found no signs of pre-mortem physical injury.