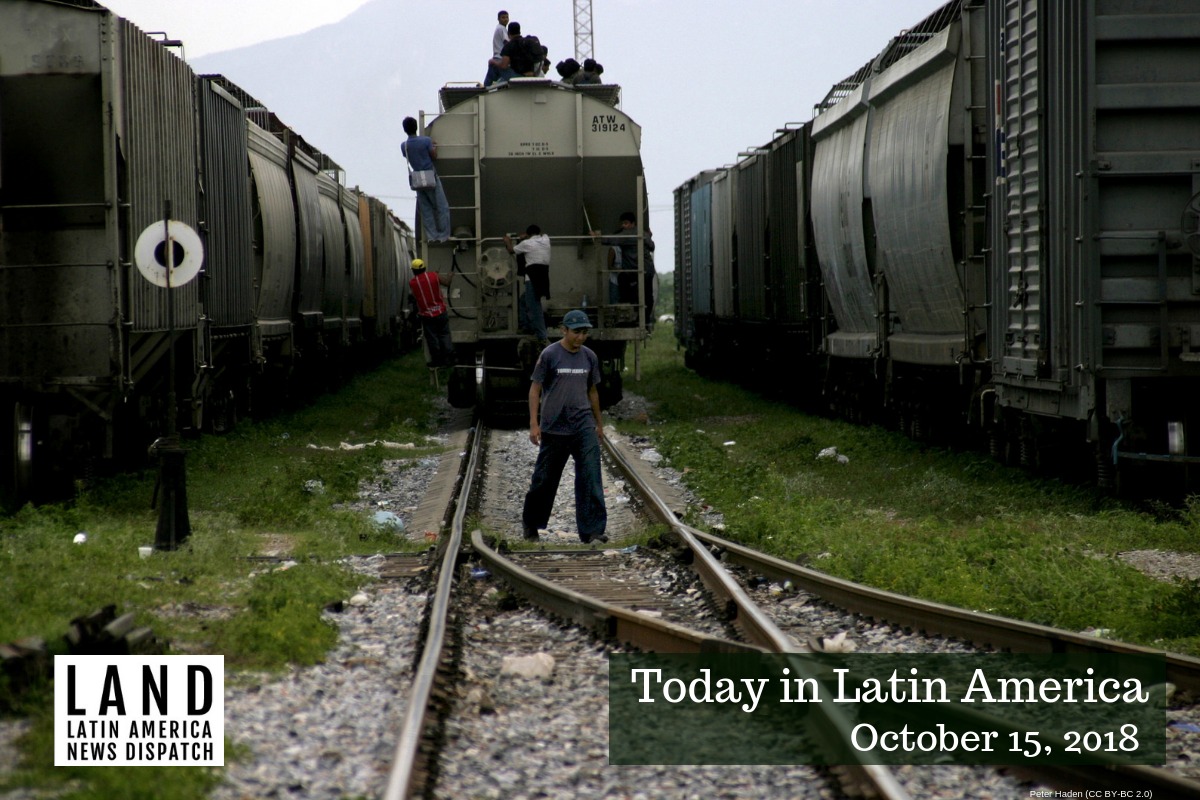 HONDURAS: As the United States calls for tighter border control, a spontaneous migrant caravan began its northward trek from San Pedro Sula, one of the most dangerous cities in Honduras. More than 1,600 people joined the “March of the Migrant for a Better Life,” the second organized wave of migration after the “Viacrucis Migrante” reached Tijuana back in April.

Poverty is the main reason forcing Hondurans to march north, according to some. “There’s a misery and a violence that is overwhelming people. People no longer have faith in this country, and they are fleeing,” a volunteer said to the Associated Press.

The caravan is expected to reach the Guatemalan border today, although there are concerns about their ability to enter given their lack of official documents.

Listen to a Latino Rebels Radio interview with Martín Pineda of the organization CARECEN in Los Angeles about what is happening in Honduras here:

MEXICO: An investigation by El Universal newspaper found that 48 percent of surveillance cameras in Mexico City are failing or obsolete. Of the 15,310 cameras the government has installed to fight crime, over 6,000 have surpassed their intended shelf life, and over 800 are damaged. As a result, the cameras were only able to capture 14 percent of robberies that occurred in Mexico City during a six-month period in 2018.

MEXICO: Mexican Foreign Minister Luis Videgaray called Chinese Foreign Minister Wang Yi on Saturday to assure him that the new NAFTA agreement between Mexico, the United States and Canada will not jeopardize Mexico’s relationship with China. While trade relations have improved in recent years between the two countries due to partnerships like the $1.2 billion China-Mexico Fund, the new NAFTA deal includes a clause that forces any country in the agreement to notify the other two if they begin trade negotiations with a “non-market” country like China. It also gives them leeway to terminate the agreement in such cases.

MEXICO: After a mall collapsed in Monterrey on Thursday, rescue crews worked through the weekend to find any survivors, finding the body of a construction worker on Sunday. In total, the accident claimed eight deaths. Fourteen people were injured. Different parties were quick to point fingers, with one senator from the state of Nuevo León citing corruption as the reason for the collapse. The construction company working on the mall blamed the workers.

DOMINICAN REPUBLIC: The President of the Dominican Republic’s soccer federation has been banned by FIFA’s ethics committee for 10 years after being found guilty of bribery. Osiris Guzmán served a 15-day ban in 2011 and was serving a 90-day ban from all FIFA activities prior to his conviction on Friday. Mr. Guzmán was fined $151,000 and has stated that he will appeal the charges, which also included accepting gifts and other conflicts of interests.

BELIZE: Researchers found new evidence in the lowlands of Belize that points to the aptitudes of the ancient Mayans in producing and using salt. Microscopic studies of 20 different stone tools revealed that these were used to store fish or meat, although the archeological site of Paynes Creek Salt Works had no animal remains. Thus, the research suggests that Mayans must have used salt to preserve commodities for marketplace use, as the ancient Romans and Chinese civilizations did.

GUATEMALA: On Saturday, the Fire Volcano spewed ashes and lava, although no evacuations were carried out by local authorities. Guatemala’s meteorological institute reported that the eruption prompted a 5.8-magnitude earthquake in Escuintla, southern Guatemala, as well as gray columns of smoke that reached over 15,000 feet. The Fire Volcano has maintained a moderate activity since June’s deadly eruption that caused over 160 deaths, 256 missing people, and over $212 million in damages.

EL SALVADOR: Pope Francis canonized Archbishop Óscar Romero yesterday, 38 years after he was gunned in a hospital church while celebrating mass during El Salvador’s armed conflict. Some 5,000 Salvadorans were among the crowd of 60,000 people gathered in St. Peter’s Square, in the Vatican, on Sunday. Wearing the blood-stained belt used by Romero when he was gunned down, Pope Francis praised the cleric’s closeness to “the poor and the people.” Romero is often lauded as one of Latin America’s most influential human rights activists.

ECUADOR: After blocking all external communication for six months, the Ecuadorean embassy in London restored internet access to Julian Assange, the founder of Wikileaks, on Sunday.  Ecuadorean authorities had suspended access in March after he violated an agreement of not interfering in the affairs of other states. Mr. Assange started living at the embassy in 2012, when he was granted asylum over allegations of sex crimes in Sweden.

PERU: On Thursday, the Peruvian Congress approved a bill that would allow former President Alberto Fujimori to apply for house arrest. Fujimori has been secluded to a medical facility after his pardon was removed due to a heart condition. The new bill was quickly criticized by the legal team that brought Fujimori on trial for the La Cantúa massacre. Whether the bill becomes law depends on the decision of President Vizcarra.

CHILE: Thousands of demonstrators took to the streets of Santiago, Chile, to protest the political prosecution of the indigenous Mapuche people. This year’s rally demands that the government releases Mapuche political prisoners and returns control of their native lands. The Mapuche and their sympathizers have also been vocal about their discontent with the Araucanía Plan, which seeks to modernize that region of central Chile.

BOLIVIA: Twelve days after the International Court of Justice ruled in favor of Chile over a maritime dispute with Bolivia, President Evo Morales visited the Peruvian port city of Ilo, where he has proposed diverting commerce instead of trading in Chile’s Arica and Iquique ports. Morales is currently seeking funding for a transoceanic railway that will connect Ilo to Brazil’s Santos port, effectively connecting his country to both the Atlantic and Pacific oceans.

ARGENTINA: The Argentine criminal court ruled in favor of a four-year sentence against former President Carlos Menem on Friday, October 12. The ruling confirms a 2015 sentence for embezzlement. Menem is expected to appeal to the Supreme Court. Given his status as a senator, he currently has immunity and cannot be arrested