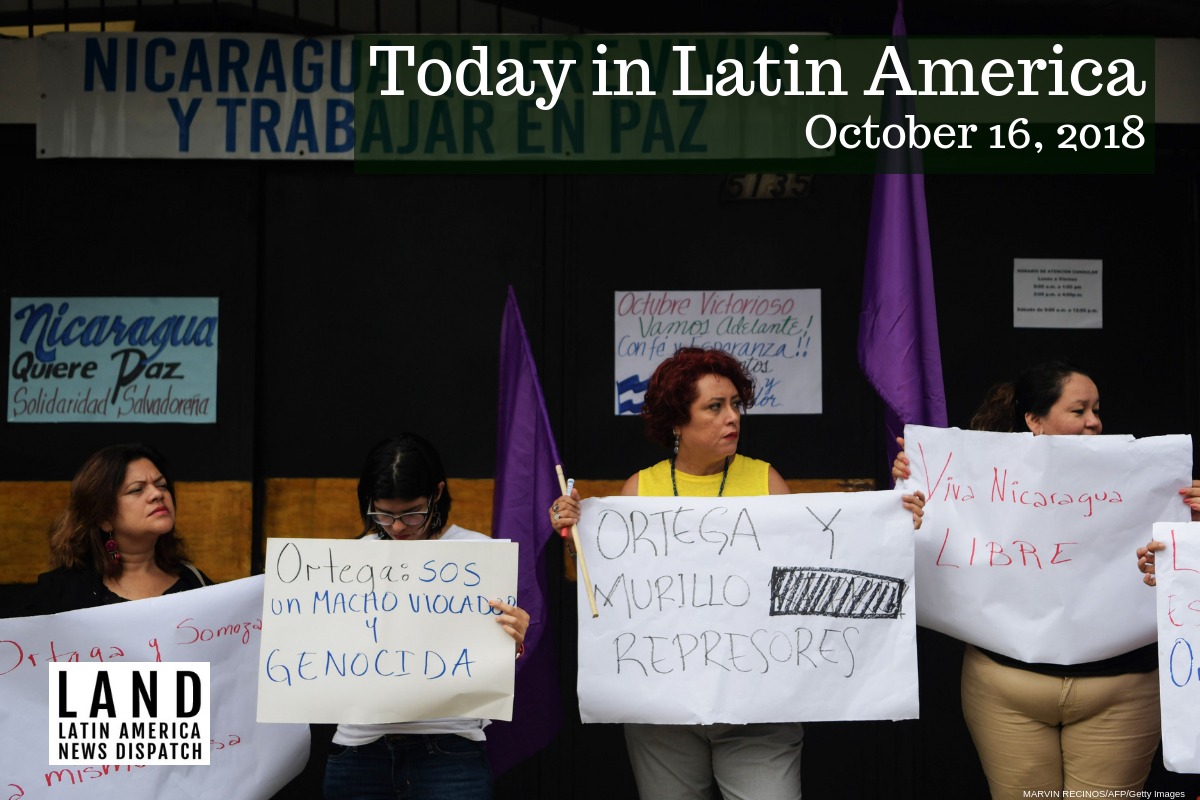 NICARAGUA: Eight of the 38 protesters arrested at an anti-government rally in Managua on Sunday have been released as of yesterday. Human rights groups are calling for the release of the rest. The group  gathered to march under the motto “United for Liberty.”

A day before the rally, police warned they would not tolerate unauthorized protests, and President Daniel Ortega accused protesters of “calling for marches not for peace, but for blood.” Officers threw stun bombs and tear gas canisters at the protesters on Sunday to disperse them. Ortega made anti-government demonstrations illegal on September 28. The Central American country has been in turmoil since last April, when Nicaraguans protested a  government health reform.

MEXICO: Mexican authorities arrested Erick Leonel Villatoro Hernández, alias “El Diablo,” last week in the state of Jalisco for his alleged role in the killing of activist Miriam Rodríguez last year. Villatoro is one of four men accused in Rodríguez’s death. Of the other men accused, one is dead, another is sentenced, and the third is in custody. Rodríguez was shot in Tamaulipas on Mother’s Day in 2017. She helped people find their disappeared family members, a cause to which she dedicated herself after she found her own daughter’s remains.

MEXICO: Authorities in the state of Baja California are investigating the death of a Catholic priest in the municipality of Playas de Rosarito. Icmar Arturo Orta was found dead Friday, and his death is being investigated as a homicide, officials said. More than two dozen priests have been killed since exiting President Enrique Peña Nieto took office in 2012.

BARBADOS: Up to 1,500 government workers will lose their jobs in coming weeks as Barbados struggles to keep up with the International Monetary Fund’s, or IMF, economic reform plan for the country. In a televised speech Sunday, Prime Minister Mia Mottley said severance packages and other support would be available to laid-off workers. Mottley said the rumor that thousands would be laid off is untrue, but added, “regrettably, one is too many.”

GUATEMALA & HONDURAS: A Honduran migrant caravan of about 1,600 arrived at the Guatemalan border yesterday. The caravan, which began as a group of about 160, left San Pedro Sula, Honduras, on Friday. About 100 Guatemalan police officers waited at the border as the caravan arrived. Although the group sets its sights on the United States, both Guatemala and Mexico have emphasized that they will not allow the caravan to enter their states.

BOLIVIA: The Deputy Minister of Bolivia’s agency on Institutional Transparency and Fight against Corruption announced a criminal complaint against the mayor of Cochabamba, José María Leyes, and his sister, Claudia Leyes, for “misuse of public services.” The siblings and three other officials are under scrutiny for corruption involving school breakfasts, communication towers and other contracts.

CHILE: The Army has asked two officials to retire after they led a ceremony paying tribute to supporters of the former military dictatorship of Augusto Pinochet, including Miguel Krassnoff, a member of Pinochet’s secret police. Krassnoff is currently in jail for crimes against humanity. The officials asked to retire were Krassnoff’s son and the director of the Military School, where the ceremony took place. But they will maintain their pensions and their ranks.

PARAGUAY: The Ministry of Labor chided a children’s clothing company for posting a discriminatory job advertisement. According to the ad, the company was seeking employees “without children,” a specification the government said violated the country’s law protecting women in the workplace. The retailer apologized and said the wording of the ad was a mistake.