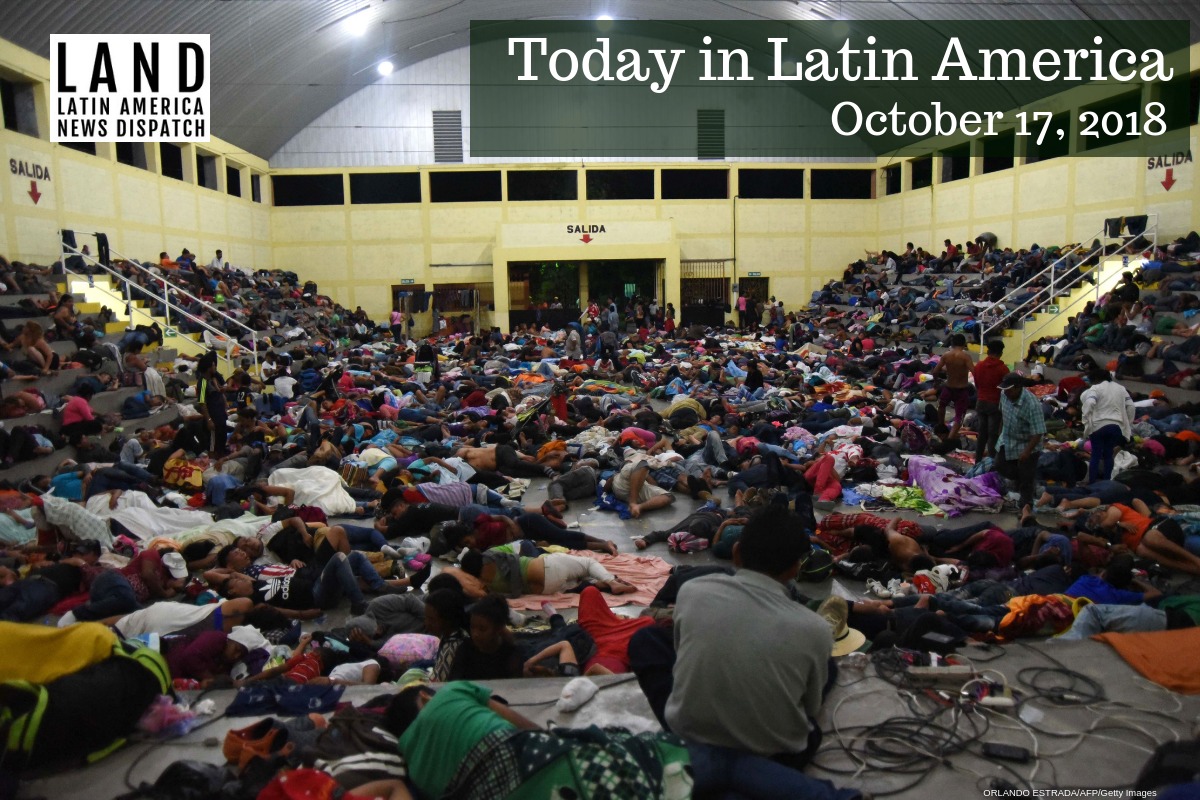 Honduran migrants heading to the United States, rest at a gymnasium of a Catholic church in Chiquimula, Guatemala, on October 16, 2018. (Photo by Orlando Estrada/AFP/Getty Images)

UNITED STATES: As a caravan of some 2,000 Honduran immigrants continues its march to the United States through Guatemala, President Trump tweeted yesterday that if the caravan was not halted by Honduras’ government, the U.S. would stop providing Honduras with money or aid. Trump made a similar threat over an earlier caravan in April, but did not follow through.

The United States has strongly informed the President of Honduras that if the large Caravan of people heading to the U.S. is not stopped and brought back to Honduras, no more money or aid will be given to Honduras, effective immediately!

Honduran President Juan Orlando Hernández has previously defended migrants, stating that “migration is a human right” at a speech in September at the U.N. General Assembly. The immigrants in the caravan, which originated in Honduras, were escorted by Guatemalan police after resting and restarting their journey yesterday. Originally, the caravan started as 160 migrants that departed from San Pedro Sula.

If it successfully crosses Guatemala and reaches Mexico, immigrants will have to meet Mexican immigration requirements, as Mexico’s immigration authority warned late Monday. In most cases, Hondurans need visas to visit Mexico.

UNITED STATES: An investigation into purchasing irregularities and possible fraud in Puerto Rico’s capital, San Juan, led to the FBI raiding government offices yesterday, seizing documents and other items. The special agent in charge also told reporters that authorities are looking into possible obstruction of the investigation.

MEXICO: A group of parents gathered in front of a kindergarten in Mexico City on Tuesday to denounce the alleged sexual abuse of more than 30 children by one of the kindergarten’s teachers. The day before, the parents protested outside of the Central Prosecutor’s Office for the Investigation of Sexual Offenses.

CUBA: Cuban diplomats protested by shouting and banging on tables at the Economic and Social Council chamber of the United Nations. During an event organized by the United States to call for the release of the political prisoners on the island, Cuba’s U.N. Ambassador Anayansi Rodríguez demanded the U.S. lift the economic blockade against the island and called the meeting a “new chapter in the long list of aggressions against Cuba.”

NICARAGUA: Nine protesters were sentenced to 15 to 24 years in prison after being found guilty of terrorism on October 3. They were charged with holding and carrying firearms and ammunition; their sentence was read on Monday. Meanwhile, thirty people were freed yesterday after they were arrested during the anti-government demonstration on Sunday in capital city Managua.

GUATEMALA: The government of President Jimmy Morales has denied or revoked 14 visas of the staff working for the U.N.-backed anti-corruption commission. Amongst those affected are Colombian lawyers that head investigations against politicians involved in alleged briberies and illicit electoral financing.

EL SALVADOR: The General Attorney’s Office issued an arrest warrant against former President Mauricio Funes, who’s an asylee in Nicaragua, after he was linked to a new case of corruption. Alongside the former General Attorney Luis Martínez, he will be charged with 10 crimes. Funes is currently in trial for allegedly diverting $351 million during his administration.

VENEZUELA: An explosion at a power station in the northern state of Carabobo Monday night left about half of Venezuela without power. As of yesterday morning, some residents posted on Twitter that they were still without power. The blackout affected at least 11 of Venezuela’s 23 states. In July, capital city Caracas experienced a massive power outage, an occurrence much more common in rural areas of the economically-strapped country.

ARGENTINA: Elisa Carrió, an Argentine deputy and co-founder of the political coalition Cambiemos, which helped elect President Mauricio Macri, filed a request to impeach Minister of Justice Germán Garavano. The impeachment request comes after Garavano said an “ex-president” should not be in jail, which Carrió took to mean ex-President Cristina Fernández de Kirchner, who was charged in a bribery scandal last month.