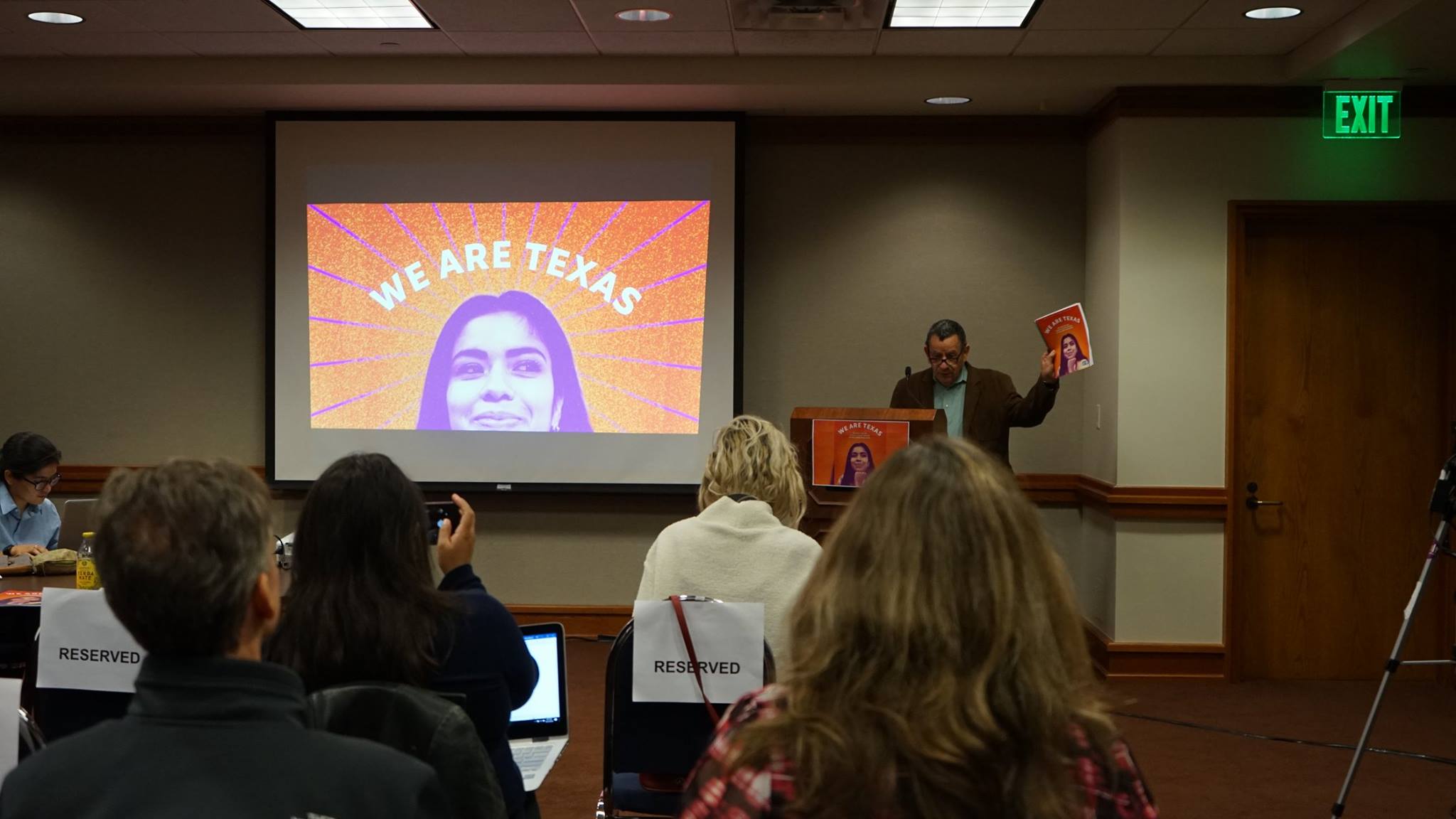 "We Are Texas: An Analysis of Young Latino Voters in the Lone Star State” press conference. (Photo courtesy of Hector Sifuentes)

AUSTIN, TX — A new study unveiled by Jolt, an Austin-based organization that aims to mobilize young Latino voters, sheds light into the voting behaviors of Latinos in Texas and sets ambitious goals for political parties, philanthropic organizations and policymakers to close the voter gap for Latinos, paving the way for more fair and balanced state elections.

“We Are Texas: An Analysis of Young Latino Voters in the Lone Star State,” which surveyed more than 1,000 Latinos in Texas ages 18 to 45, found that healthcare is the most important issue to Latinos, that half of those surveyed are cynical about voting and that 34 percent “are not sure” they belong to either major political party.

“We’ve heard many claims made about our community. About why we do or do not vote, what we care about and how we see the world, oftentimes without asking Latino voters themselves,” said Cristina Tzintzun Ramirez, who serves as Jolt’s founder and executive director, during a press conference at the Texas State Capitol on Wednesday morning.

This is where We Are Texas differs, she said, describing it as one of the most comprehensive studies on young Latino voters ever conducted in Texas.

Other issues Latinos care about include legalizing marijuana, expanding gun control, canceling student debt, raising the minimum wage and protecting the environment—all of which are considered “liberal” issues. Young Latinos cited healthcare and a pathway to citizenship for unauthorized immigrants as their top two priorities.

“Anybody that cares about this state, about the country, needs to read this report and take its recommendations seriously. You cannot solve any of the issues our state faces without the voices, issues and needs of Latinos being represented in our government,” Tzintzun Ramirez said.

She said Latinos have been reduced to immigration as the end-all, be-all issue, but they care about several issues, including climate change.

“Truth be told even if immigration reform happened tomorrow —which we are from that happening and that would be an amazing accomplishment for our community— but millions of people would still wake up, be people of color and the majority would be poor,” Tzintzun Ramirez told Latino USA. “So, they would continue to face real challenges based on racial discrimination, inequities in our schooling, in employment, the list goes on. We need to also tackle those issues for our community as well.”

Texas has one of the lowest voter turnouts in the country, despite having among the greatest number of potential voters. Historically, voters ages 65 and older have shaped Texas politics, but young voters registered in record numbers for the upcoming November midterm elections.  A recent report by the Star-Telegram suggests that this upcoming Election Day could see a battle among new voters and Baby Boomers, rather than Republicans versus Democrats.

According to the Star-Telegram’s analysis, voters ages 18-29 have more registered voters than any other age group in Texas. But during the last two midterm elections, only a small percentage of registered young voters cast ballots.

“Personally, I think this must also become a call to action for Latino males of all ages to not be left behind,” said Dr. Carlos Arce, founder of US-ness, an applied research firm.

US-ness partnered with Jolt Initiative and EthniFacts, a survey research firm to conduct the study.

The stronger participation from young Latinas points to an increasing need to tailor to their needs, Tzintzun Ramirez noted.

“Find out why do Latinas vote more and how can they help the rest of their community vote in greater numbers,” she said. “I find it’s super easy in our line of work to get folks engaged, it’s just that there’s not the level of investment needed in this state to reach the huge number of young Latinos that there are.”

Because of their growing numbers, young Latinos especially could have a significant impact on election results, particularly in high-profile “toss-up” races like the one between Republican incumbent Ted Cruz and Democratic challenger Beto O’Rourke for a Senate seat.

Results from the study show young Latinos’ views align more with O’Rourke’s campaign but he still trails Cruz by 9 points in the latest Quinnipiac poll. O’Rourke carries a 24-point lead among Hispanic voters.

Today, one in two Texans younger than 18 years old are Latino, and by 2022, Latinos will be the largest ethnic group in the state.

Over the next decade (which includes two presidential elections and three midterms), more than 2 million Latino citizens will reach voting age, representing half of the state’s new age-eligible voters. It’s a critical opportunity for politicians to connect with potential Latino voters but, as of now, a significant number of young Latinos surveyed reported feeling uninformed about the political candidates, cynical about their vote mattering or that candidates even cared to include them in the political narrative.

We Are Texas found a “leaky voter pipeline” in which 46 percent of Latinos in Texas meet the age and citizenship requirement to vote. Of those, only 33 percent are registered to vote. And only 15 percent of registered Latino voters cast ballots in the 2016 election.

“For us it’s a three-legged stool: Registration. It’s addressing the issues that our community cares about. You’re not going to get us out to vote unless you address our needs. Then it’s about investing in our community to get our folks out to vote,” she said.

Tzintzun Ramirez also said Jolt will hold politicians accountable and use the study’s results as a call to action.