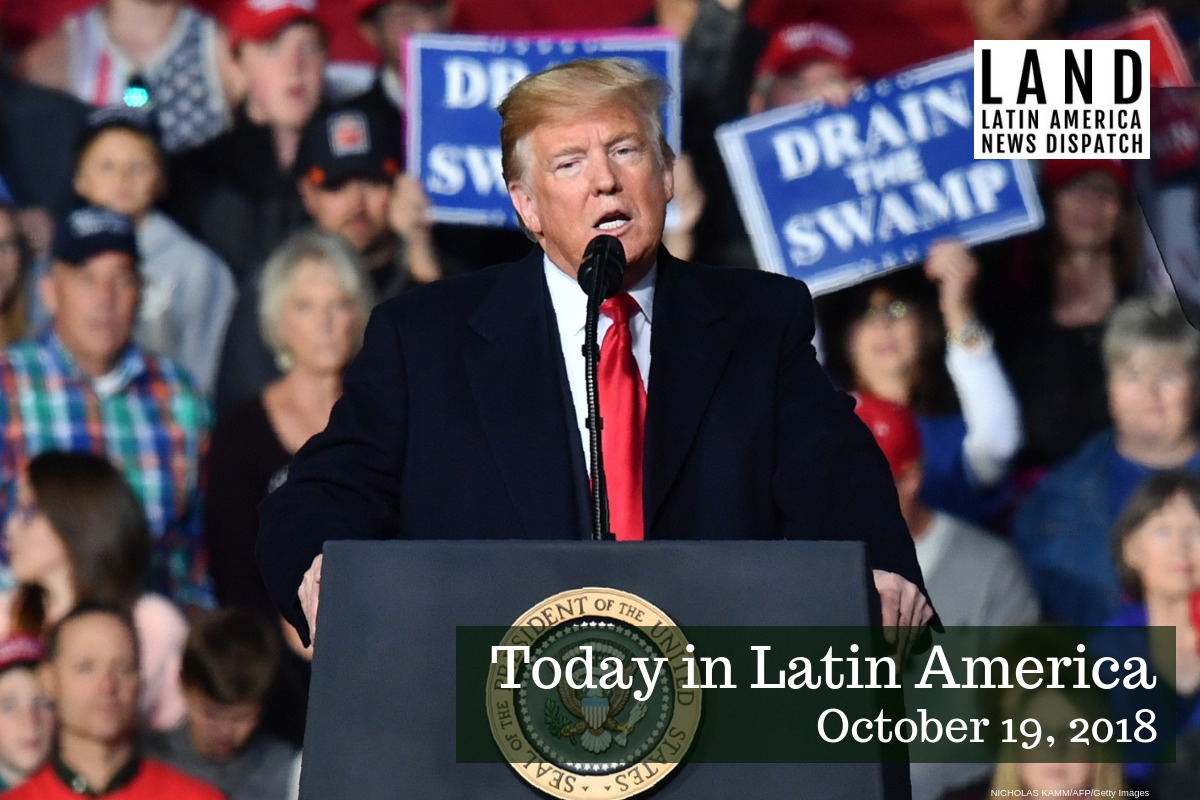 REGIONAL: In his latest anti-immigrant Twitter rant, President Donald Trump threatened to order the military to close the U.S. southern border if Mexican authorities fail to stop roughly 3,000 Honduran migrants currently making their way through Guatemala. Trump had already threatened to end U.S. aid to Honduras if the government did not halt the migrant caravan. After meeting with the president Thursday morning, Secretary of State Mike Pompeo traveled to Mexico to discuss the issue in person.

….In addition to stopping all payments to these countries, which seem to have almost no control over their population, I must, in the strongest of terms, ask Mexico to stop this onslaught – and if unable to do so I will call up the U.S. Military and CLOSE OUR SOUTHERN BORDER!..

In response to the mounting pressure, Mexico dispatched police reinforcements to its southern border. In order to cross into Mexico, the Honduran migrants will now either have to present a visa, which few possess, or file for refugee status, in a process that can take months. Later Thursday afternoon, the government announced that, out of concern for migrant rights, it will ask for support from the United Nations in accommodating the Honduran migrants. President-elect Andrés Manuel López Obrador said this week that his administration will provide work visas to all Central American migrants fleeing crises in their countries.

MEXICO: Several professional soccer clubs across the country joined yesterday in mourning the killing of a respected women’s coach and advocate. Marbella Ibarra founded Xolas de Tijuana, Mexico’s first professional women’s team, and helped start a professional league in 2017. Her body, which displayed signs of severe beating, was found on a beach near Tijuana earlier this week, almost a month after she was presumed kidnapped.

UNITED STATES/CANADA: The U.S. Customs and Border Protection agency announced that members of Canada’s new legal marijuana trade will not be allowed to enter the U.S. “to facilitate or develop the marijuana industry”. The Canadian law legalizing recreational use went into effect on Wednesday, a few months after it passed the Senate. The president of the International Narcotics Control Board was also disapproving, saying his agency is “deeply concerned about the public health impact of these policy choices.”

HAITI: At least two people were killed during Wednesday’s nationwide anti-corruption protests, authorities said yesterday. Dozens more were also injured. On a day commemorating independence hero Jean-Jacques Dessalines, thousands took to the streets to demonstrate against the misallocation of $3.8 billion in public funds from the Venezuelan oil loan program, Petrocaribe. Some protesters called for the resignation of President Jovenel Moïse, who they say has shielded former government officials involved in embezzlement.

NICARAGUA: The government employed military-grade weapons as part of a broader repressive campaign against protesters that also included arbitrary arrests and torture, according to a new Amnesty International report. Over 300 people have been killed and at keast 2,000 injured since protests began in April, the report said. While 30 protestors were released from El Chipote prison earlier this week, some 500 remain behind bars.

PANAMA: U.S. Secretary of State Mike Pompeo met with President Juan Carlos Varela in Panama City yesterday to discuss the situations in Nicaragua and Venezuela. The meeting also touched on drug trafficking, migration, and terrorism issues, just a few hours before Pompeo flew to Mexico, which a caravan of some 3,000 Honduran migrants is expected to cross on its way to the U.S. border.

ECUADOR/VENEZUELA: Ecuador expelled the Venezuelan ambassador yesterday, after Venezuelan Communications Minister Jorge Rodríguez called President Lenín Moreno a “liar.” Moreno had claimed that 140 buses of Venezuelan migrants come to Ecuador every day. The Venezuelan government has continued to deny and downplay its migration crisis, despite new reporting chronicling the hardships faced by the hundreds if not thousands who leave the country each day, often on foot.

BRAZIL: Center-left presidential candidate Fernando Haddad accused his far-right rival Jair Bolsonaro of electoral fraud yesterday, with a little over a week to go before run-off elections. Haddad’s accusations are based on a front-page report in Folha de São Paulo, one of Brazil’s leading newspapers, that claims businessmen and business groups who support Bolsonaro, currently the heavy favorite, have bankrolled a fake news campaign to smear Haddad on WhatsApp. If the accusations are true, the campaign could violate campaign finance laws.