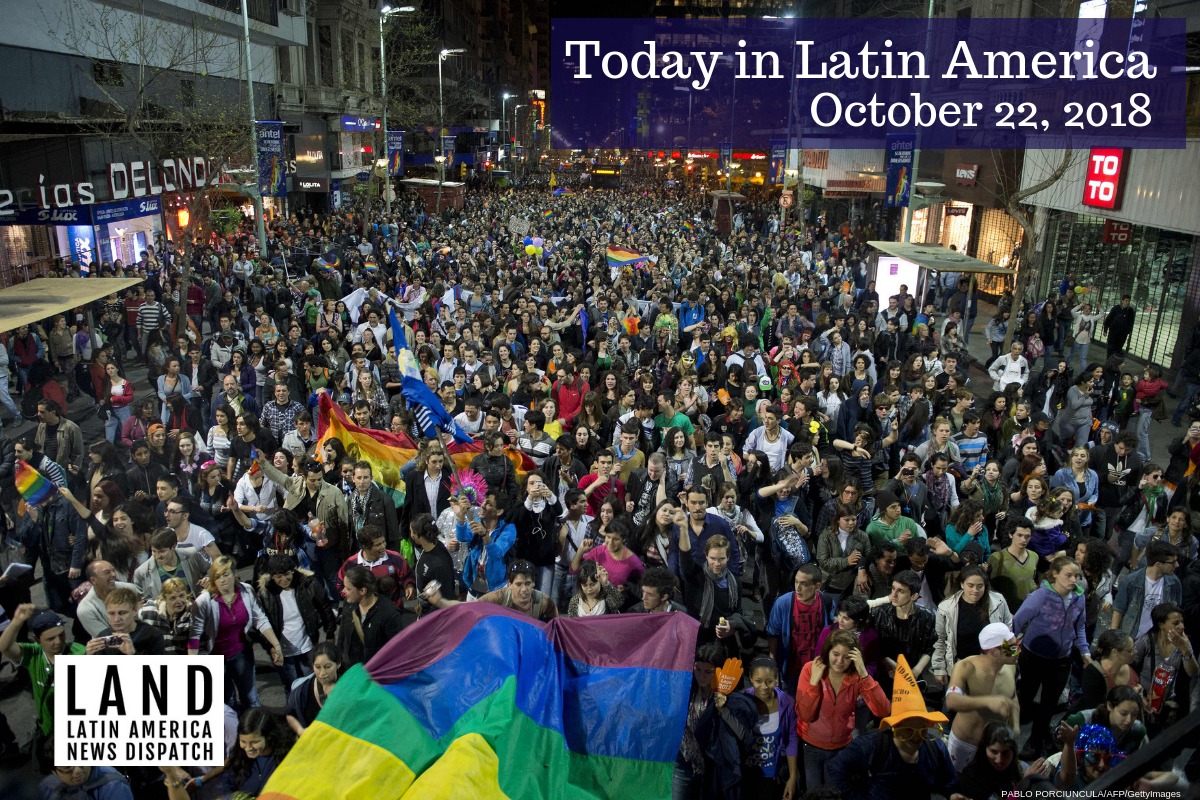 URUGUAY: On Thursday, Uruguay ratified a proposal that will grant rights to transgender people. Among other things, the decision includes health benefits that allow members of the trans community to get gender reassignment surgeries and hormone treatments, both covered by the government.

According to a 2016 census, at least 853 transgender people live in Uruguay. The approved law requires the Uruguayan state to ensure that a minimum number of them (at least 1 percent) is represented in the government. It also stipulates that at least 2 percent of scholarships should support the education of transgender individuals. And it demands financial compensation for those who were persecuted during the country’s 1973-1985 military dictatorship.

The law was met with some resistance earlier this year in August when two of the original requests that accompanied it were unanimously dismissed by the Congress. The requests would have given minors the right to change their names according to their sexual identity and get a gender reassignment procedure without their parents’ consent.

MEXICO: A kindergarten employee, Ramón Morales Jacobo, was arrested Friday in Ecatepec, Mexico, for physically and sexually abusing 37 children. The school’s entire staff will be replaced by the end of October. The first complaint occurred earlier this month when a parent discovered their child had been abused. Mexico’s Attorney General has opened an investigation and believes that other teachers may also be guilty of assault.

….The assault on our country at our Southern Border, including the Criminal elements and DRUGS pouring in, is far more important to me, as President, than Trade or the USMCA. Hopefully Mexico will stop this onslaught at their Northern Border. All Democrats fault for weak laws!

MEXICO: The Central American caravan, largely integrated by migrants from Honduras, continues moving north towards the U.S. border despite efforts to stop them. Passing through the city of Tapachula, in Chiapas, migrants were helped by locals giving them free rides and food. A few days earlier, Trump threatened to close the border if Mexican authorities fail to stop the caravan.

MEXICO: Hurricane Willa, a Category 4 storm, made its way to Mexico’s Pacific coast on Sunday. The storm should result in up to 10 inches of rain across western Jalisco, western Nayarit and southern Sinaloa states. Until then, the shore from San Blas to Mazatlán is under hurricane watch.

ARUBA: Two undocumented Venezuelans died while attempting to reach Aruba, while three others were detained by officials in the Dutch island. A group of 20 people shipwrecked near Santana di Cachó, off the Southern coast of the island. Authorities from neighboring Curaçao, also a Dutch territory, have stated that the island is “flooded with Venezuelan refugees” and that “the crisis is unacceptable.” Some 2.3 million Venezuelans have fled the country in the last couple of years as part of the worst refugee crisis in the hemisphere.

CAYMAN ISLANDS: The United Kingdom has appointed a new governor in the Cayman Islands. Martyn Roper, a career diplomat who was stationed in Beijing, succeeds Anwar Choudhury, who served as governor for only three months. Mr. Choudhury, a Bangladeshi-born British diplomat, was recalled by the Foreign Office of the UK after allegations of domestic abuse and workplace harassment of his staff.

GUATEMALA: Over two thousand migrants participating in the caravan have returned to Honduras, President Jimmy Morales announced Saturday. The statements came during an emergency meeting in Guatemala City with his Honduran counterpart, Juan Orlando Hernández. However, estimations say that the caravan might have swelled up to over 5,000 migrants.

HONDURAS: On Saturday, eight suspects started to face trial for the murder of environmentalist and indigenous leader Berta Cáceres. The trial was soon thrown into disarray when the judges expelled one of the victim’s attorneys from the courtroom. The trial had been suspended since September when Cáceres’ family demanded three judges to be replaced due to fear of bias and abuse of authority. The plaintiff team claims that the Honduran Public Ministry is withholding key evidence to protect senior executives of Desarrollo Energético (Desa), the company involved in the events leading to Cáceres death.

EL SALVADOR: This past Friday, a $127.7 million investment made by a U.N.-backed organization will bolster up climate resilience in farms around El Salvador’s dry corridor, benefiting 225,000 people. In coalition with the Food and Agriculture Organization, the Green Climate Fund approved the initiative RECLIMA, which will support 50,000 families in 114 municipalities on a region known for droughts, floods, and tropical storms. The project will take five years to implement. This past summer, the country had to take emergency measures to counteract a drought that depleted several farms.

PERU: Peruvian Prosecutor José Domingo Pérez petitioned the preventive imprisonment of 12 Fujimoristas on Sunday but the hearing was adjourned for some unspecified date this upcoming week. Domingo Pérez had requested that Keiko Fujimori, the leader of the Fuerza Popular party and the daughter of former President Alberto Fujimori, be detained for the next 36 months due to investigations over her involvement with Odebrecht. If the preventive prison is granted, Fujimori would be barred from participating in the 2021 presidential elections.

ECUADOR: Wikileaks founder Julian Assange is reportedly suing the Ecuadorean government over violations to their original arrangement for his asylum. Assange’s lawyers have filed a motion on Friday urging the government to provide the basic rights that he had originally been guaranteed. According to Assange, Ecuador is required to pay for his doctor’s visits, provide safe and unrestricted internet access, and allow a more relax procedure for his personal visits.

BOLIVIA: President Evo Morales announced last Saturday that the country’s economic growth meant that workers would be granted a double Christmas Bonus. According to Bolivia’s National Institute of Statistics, the country is experiencing a 4.6 percent growth, the largest in South America this year. The announcement, however, was negatively met by the Confederation of Private Businesses. The group’s president, Ronald Nostas, urged President Morales to reconsider his actions as he is overlooking the damage that they might cause. Many businessmen have criticized the decision for disregarding the unequal growth from different sectors and industries.

BRAZIL: The weekend prior to the runoff elections in Brazil has experienced rallies against and in favor of leading candidate Jair Bolsonaro. Throughout Saturday, protestors marcher against Bolsonaro, with the masses shouting “Not Him!” However, despite the dissidence, his supporters rallied in his favor throughout 15 states on Sunday. Bolsonaro won the previous round of the elections with 46 percent of votes and is expected to win the upcoming runoff, to be held on October 28.