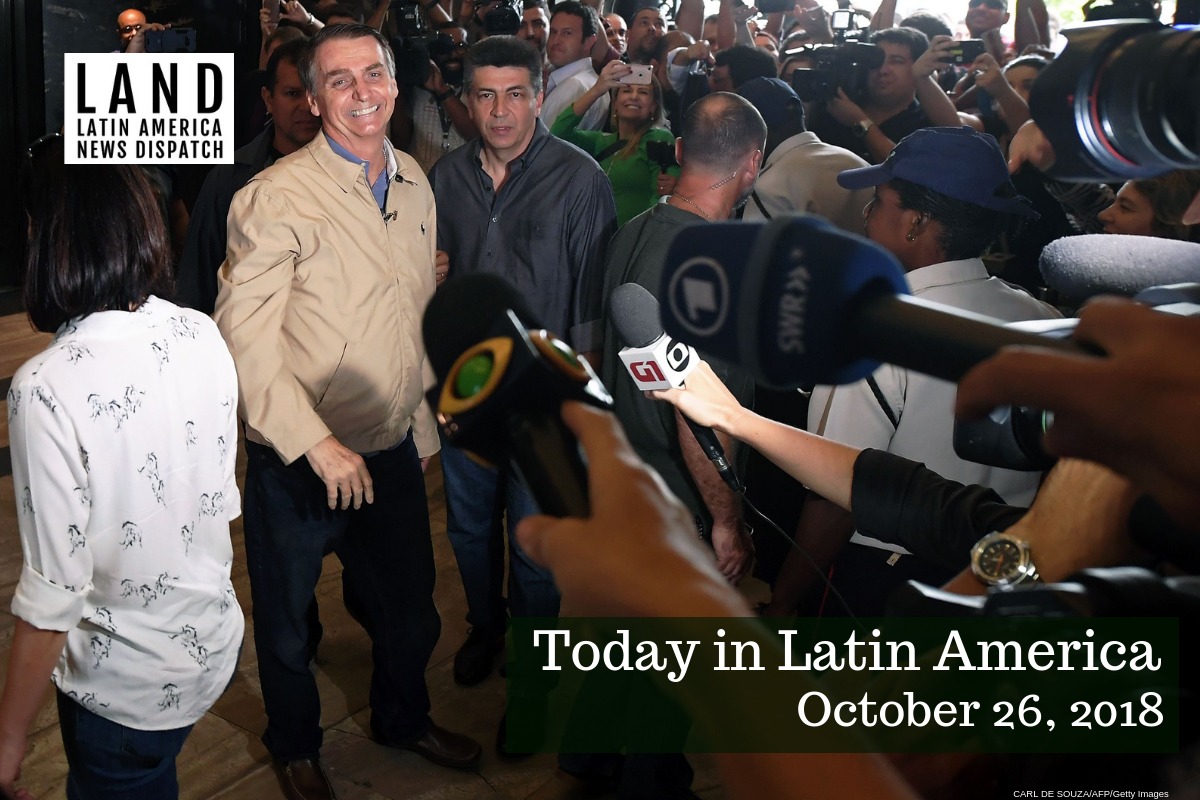 BRAZIL: Far-right presidential frontrunner Jair Bolsonaro said yesterday that, if elected this Sunday, he will scrap his previous plans to withdraw from the Paris climate accord. Answering questions at a press conference in Rio de Janeiro, Bolsonaro said that, while it “could meet its goals without being in any agreement at all…Brazil will not leave; it will stay in the Paris accord.” He went on to reaffirm his opposition to indigenous sovereignty rights and Brazil’s existing commitments to protect and reforest the Amazon.

As Alanna Elder reports in an article on Latin News Dispatch, Bolsonaro’s election could have significant worldwide environmental impact, regardless of whether Brazil ultimately remains in the Paris agreement. With a 12 percent lead heading into Sunday’s second-round vote, the longtime lawmaker, best known for his record of advocating for political violence, racism, homophobia, and sexism, has attempted to moderate his rhetoric around certain positions. But he continues to draw key support from the so-called Bullets, Bibles, and Beef caucus, which includes large landowners and agro-industrial interests responsible for much of the ongoing deforestation in the Brazilian Amazon.

UNITED STATES: President Donald Trump is reportedly considering a sweeping executive order that would close the Mexican border to migrants seeking asylum. Earlier yesterday, a White House official said that Defense Secretary Jim Mattis will soon sign an order sending as many as 1,000 active duty soldiers to reinforce National Guard forces already posted along the border. The escalation deployment comes even as the Central American migrant caravan, currently in southern Mexico, is reportedly diminishing in numbers, due to sickness, exhaustion, and migrants who have decided to file asylum requests in Mexico.

MEXICO: Polls opened yesterday in a four-day vote to decide the fate of a partially constructed new airport in Mexico City. Supporters say the $13 billion project, a third of which has already been built, is needed to meet growing demand, but opponents worry it will invite corruption, pollute drinking water, and harm the local environment. President-elect Andrés Manuel López Obrador opposed the airport as a candidate but has since said the issue should be put to a vote and that his administration will respect public opinion.

TRINIDAD: A week of heavy rain in Trinidad has flooded much of the island, damaging over 4,300 homes and 500 farms, officials said yesterday. The rain also knocked out power, created landslides, and closed schools. Authorities are currently working to bring relief to nearly 200,000 people affected by the weather.

PUERTO RICO: A new plan announced by the Puerto Rican government on Wednesday would commit the U.S. territory to a 100 percent renewable energy grid by 2050. Introduced by Governor Ricardo Rosselló as an adjustment to Puerto Rico’s energy bill, the plan would stop the use of coal for electricity by 2028, instead prioritizing solar. It would also end the monopoly status of the troubled Puerto Rico Electric Power Authority, which declared bankruptcy last July following Hurricane Maria.

GUATEMALA: Foreign Affairs Minister Sandra Jovel said yesterday that the yet-to-be-named deputy commissioner of Guatemala’s U.N. anti-corruption commission must first be approved by the government, calling such a review “normal procedure.” President Jimmy Morales, who has been investigated by the commission for campaign finance irregularities, barred the acting commissioner from the country in September, forcing the United Nations to appoint a deputy. The commission’s mandate does not require that staff choices be evaluated by the host government.

PERU: Opposition legislator Marisa Glave called yesterday for members of Keiko Fujimori’s party to be removed from congressional leadership positions. Her comments were echoed by other lawmakers and came as hearings over Fujimori’s alleged money laundering continued into their second day. Fujimori, a congresswoman , and likely presidential candidate, was arrested earlier this month and charged with accepting $1 million in illegal campaign contributions from the Brazilian construction giant Odebrecht.

ARGENTINA: The lower house of Congress approved an unpopular 2019 budget bill early yesterday morning that includes tax hikes and severe spending cuts. The bill, which was met with large protests outside of the capitol Wednesday, will now have to be approved by the Senate. President Mauricio Macri has asked for the austerity measures in order to meet the terms of a record $57 billion loan from the International Monetary Fund.

CHILE: Sex-abuse victims in Santiago filed a criminal complaint against Catholic Cardinal Francisco Javier Errázuriz yesterday. Prior to becoming an advisor to Pope Francis, Errázuriz served as the archbishop of the Chilean capital, where he allegedly helped cover-up the widespread sexual abuse of children by clergy. The complaint also accuses Errázuriz of perjuring himself before investigators.