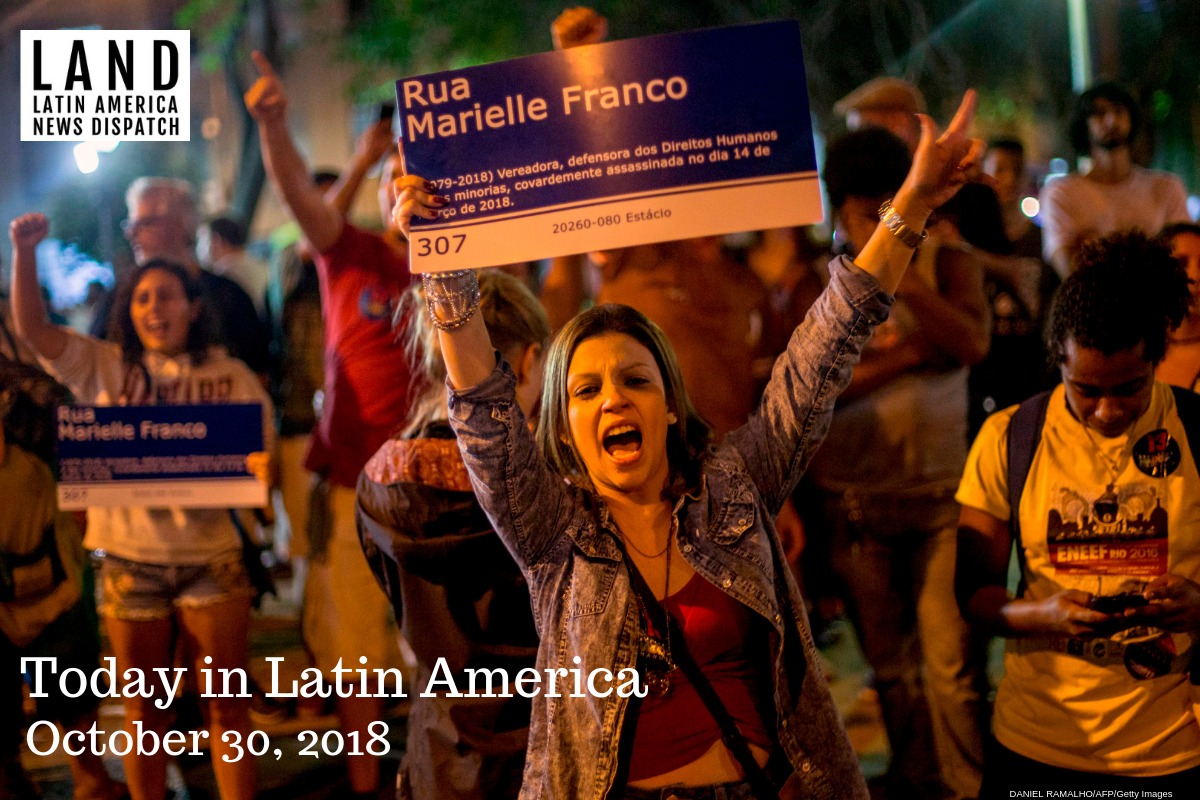 BRAZIL: One day after Jair Bolsonaro won the presidential election, Brazilians began organizing resistance movements to protest the far-right leader. Yesterday morning two hashtags were trending on Twitter in Brazil: #EleNaoEMeuPresidente (Portuguese for #HeIsNotMyPresident) and #MaisLivrosMenosArmas (#MoreBooksFewerWeapons), referring to Bolsonaro’s pro-gun stance. Fernando Haddad, of the leftist Workers’ Party, lost after obtaining only 44.3 percent of the votes. After his loss, he announced that he would help organize opposition movements.

Had a very good conversation with the newly elected President of Brazil, Jair Bolsonaro, who won his race by a substantial margin. We agreed that Brazil and the United States will work closely together on Trade, Military and everything else! Excellent call, wished him congrats!

MEXICO: A four-day referendum on the building of a $13 billion airport near Mexico City concluded with 70 percent voting against it. More than 1 million Mexicans participated in the referendum, which was fraught with alleged irregularities. President-elect Andres Manuel Lopez Obrador said he will respect the results when he takes office December 1. Environmental groups celebrated the decision, while the industrial sector criticized it as backward and detrimental to the growth of the country.

UNITED STATES: The Pentagon said yesterday that it would deploy 5,200 troops to the Mexican border, a larger number than expected, in response to thousands of Central American migrants heading to the U.S.-Mexico border in a caravan. The decision comes as Trump hardens his stance on immigration ahead of midterm elections. The deployment will create an active-duty force comparable to the U.S. military contingent in Iraq.

MEXICO: A second migrant caravan has clashed with Mexican authorities at the Mexico-Guatemala border as migrants threw objects at police blocking the passage. This caravan, of about 600 individuals, has encountered a stronger resistance from Mexico. Authorities have also blocked river crossings, which the previous caravan used to cross the border.

PUERTO RICO: Several Puerto Rican organizers in Florida recently sent a letter to Gov. Rick Scott asking the state government to “halt new investments with TGP Capital.” They say the company has been foreclosing on homeowners affected by Hurricane Maria, even though the U.S. Department of Housing and Urban Development halted foreclosures to give families time to find solutions. Florida’s Board of Administration has invested $400 million in the company since 2012, according to the letter.

GUATEMALA: A former interior minister and several of his associates were arrested yesterday as part of an ongoing United Nations corruption investigation. An investigator said the arrest of Carlos Vielman is related to alleged extrajudicial killings of prisoners when Vielman was a top official from 2004 and 2007. A Spanish Court acquitted him without trial in 2017. Prosecutors also arrested Stu Velasco, the former head of police who had worked under Vielman.

NICARAGUA: The telecommunications and postal service regulator TELCOR is pushing “100% Noticias” off of the airwaves and replacing it with retransmitted government programming. 100% Noticias has reported on President Daniel Ortega’s crackdown on protests. TELCOR claims the channel had been operating illegally, but journalist and director Miguel Mora called the order “a new violation of freedom of the press and expression, as well as freedom of enterprise in Nicaragua.” In other news about press freedom, the Committee to Protect Journalists released its annual report on impunity for crimes against journalists. Mexico, Colombia and Brazil are among the top 14 countries with the highest rates of impunity.

VENEZUELA: Former Swiss banker Matthias Krull, who laundered $1.2 billion stolen from Venezuela’s state oil company, was sentenced to 10 years in jail yesterday. The case is part of a longer United States-led investigation into allegations of corruption in the government of Venezuelan President Nicolás Maduro. In court, Krull admitted to scheming with “Los Chamos,” Venezuelan slang for “the kids,” who turned out to be Yoswal, Yosser and Walter Flores, Maduro’s stepsons.

ARGENTINA: A 6.3 magnitude earthquake hit Argentina near the town of Ushuaia yesterday. Although the earthquake was relatively shallow, only about 6 miles below the earth’s surface, no damage or casualties have been reported so far. The earthquake struck off the coast of the Tierra del Fuego archipelago in a stretch of water called the Drake Passage.