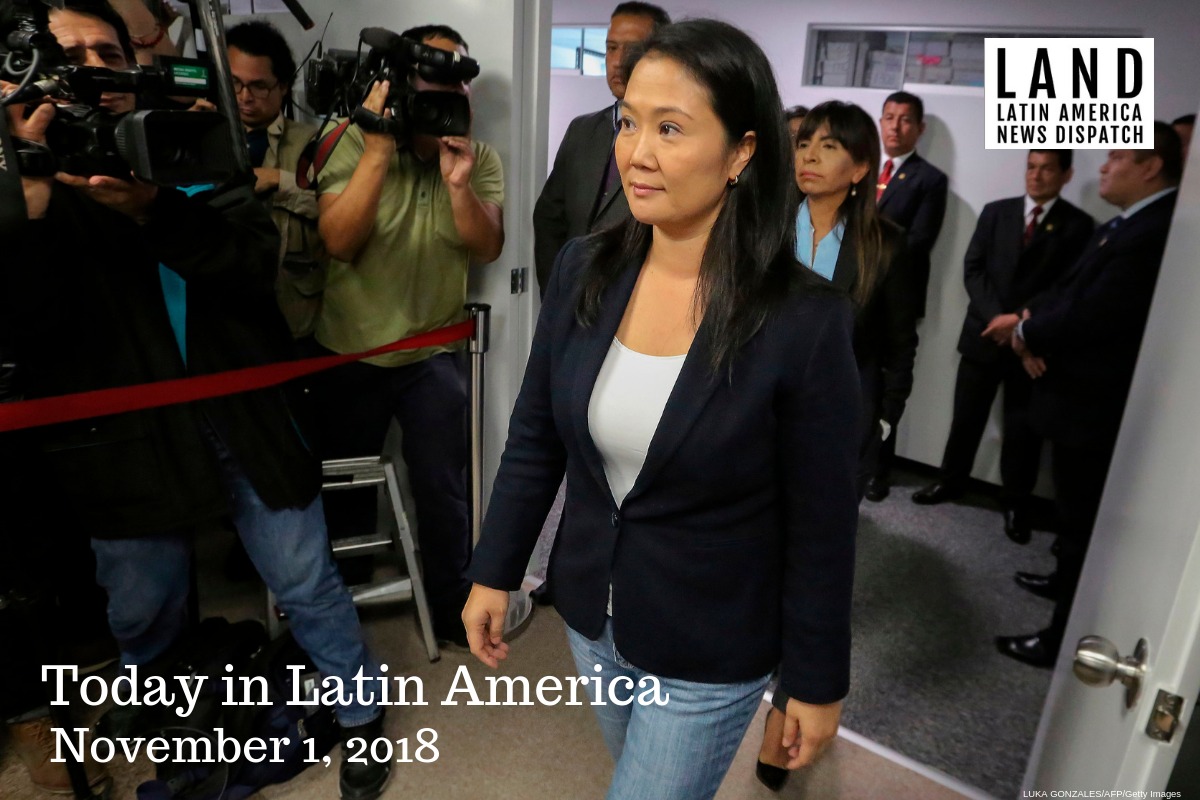 PERU: Right-wing opposition leader Keiko Fujimori was sent back to jail yesterday to complete a 36-month preventative sentence for obstruction of justice. After days of hearings that started last week, and with several witnesses still scheduled to testify, Judge Richard Concepción Carhuancho determined that Fujimori posed a flight risk and ordered her returned to police custody immediately. Further decisions pertaining to members of her Popular Force party will be issued next Monday.

The daughter of former dictator Alberto Fujimori, Keiko was found to have interfered in an investigation into systemic money-laundering within her party, which currently controls Congress. Her preventative sentence will allow officials to gather evidence that Fujimori coordinated an illegal campaign finance scheme with the Brazilian construction giant Odebrecht. Should it stand, the two-time presidential candidate would be unable to participate in the 2021 elections, which she was considered likely to win. Keiko Fujimori had been freed on appeal last month, following her arrest in relation to the money laundering charges.

THE BORDER: The 5,200 active-duty troops that President Trump deployed to the border earlier this week are limited in what they can do. Under federal law, the military is restricted from engaging in law enforcement in American soil. For the troops, this means they are not allowed to detain immigrants, seize drugs or have any direct involvement in stopping the migrant caravan. Though located about 1,000 miles away from the nearest crossing point, the caravan is still on the move.

MEXICO/EL SALVADOR: El Salvador’s Deputy Minister for Salvadorans Abroad, Liduvina Magarín, stated that 300 out of 500 migrant asylum requests crossed and were taken by Mexican authorities to shelters. In the state of Oaxaca, after traveling 250 miles, one of the caravans took a day off to negotiate the use of dozens of buses to transport migrants further into Mexico.

GUATEMALA: For the third time this year, lawmakers presented a law to punish with prison those who criticize elected officials or candidates in “in any medium of diffusion and/or on digital platforms.” Lawmakers from opposing parties stated that the bill violates the Constitution and rejected supporting it. The bill is to be analyzed in a congressional commission; two similar initiatives were heavily criticized earlier this year.

PANAMA: The Panamanian Sports Institute gave $14 million to federations and companies presided by or linked to politicians, according to an investigation. The money was distributed in checks to companies unrelated to sports, and the Institute has no record of what was done with the money. The Olympic Committee of Panama demanded an official audit by the General Comptroller Office.

NICARAGUA: The Orteguista Police kidnapped journalist Álvaro Montalván from his home, claimed his family and friends. This is not the first time Montalván faced the orteguistas. Previously, the radio station where Montalván works had the garage door broken, transmission antennas wrecked, cables cut and had his truck burnt inside the garage while the President Ortega-supporting paramilitaries threatening to kill him.

PARAGUAY: The Ministry of Justice embarked on a nationwide prison census yesterday, starting with inmates at the Esperanza Industrial Prison in Asunción. The goal is to assess the living conditions of the country’s incarcerated population and carry out programs of social reintegration. Twice in the past month, authorities claimed to have thwarted armed plots to free Brazilian gang leaders from jail.

BRAZIL: President-elect Jair Bolsonaro’s plan to merge the environment ministry with the agriculture ministry will “undermine the competitiveness of Brazilian agribusiness” in green-conscious markets, Environmental Minister Edson Duarte said yesterday. Bolsonaro’s likely chief of staff indicated Tuesday that the far-right president-elect will once again reverse his position on the issue, after moderating some of his extreme environmental proposals ahead of last Sunday’s election.