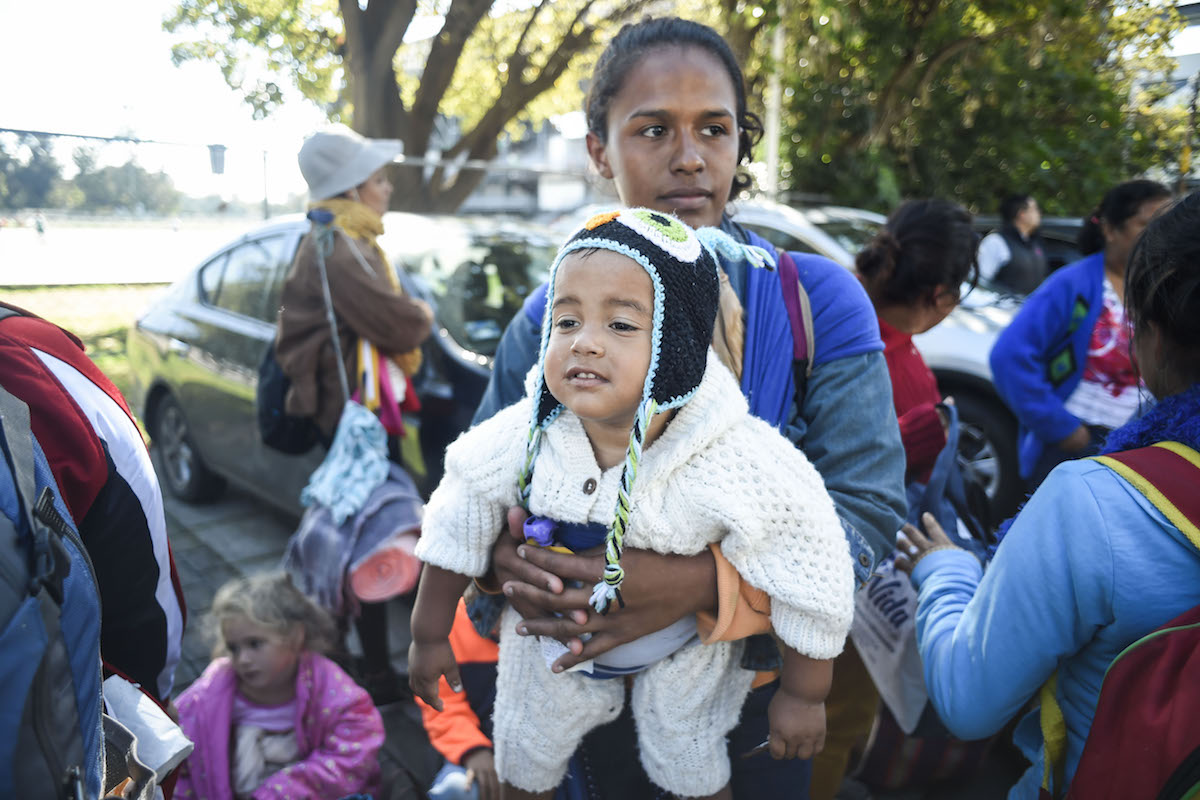 Migrants from Central American countries, mostly Hondurans, heading in a caravan to the United States, arrive to a temporary shelter in a sports center, in Mexico City where they expect to ask for documents to be able to transit Mexican territory, on November 5, 2018. (Photo by Alfredo Estrella/AFP/Getty Images)

A Facebook post on October 5 by Honduran migrant advocate and former lawmaker Bartolo Fuentes helped spread news of a caravan on its way to the United States, prompting its rapid expansion. In the post, Fuentes wrote in Spanish, “We denounce the terrible situation we are living in Honduras: unemployment, insecurity, poverty. And those who persecute us for protesting or shoot us with live bullets.”

The caravan departed San Pedro Sula, Honduras, on October 13 and is now in Mexico. At one point, it had grown to an estimated 7,000 people, according to the United Nations. While migrant caravans from Central America are not a new phenomenon (the group Pueblos Sin Fronteras has been assisting caravans for more than 15 years) this one is the largest ever reported. With the midterm elections approaching in the United States on November 6, the caravan has caught the attention of Trump, who campaigned on a tough-on-immigration platform.

In the spring, the last time a large caravan from Central America made its way to the U.S. border, with much fanfare in the media, the Trump administration enacted its “zero tolerance” immigration policy, which resulted in the separation of more than 2,500 families at the border. This caravan has also dominated the front pages of several major news outlets, including the Washington Post and the New York Times, in part because of Trump’s Twitter activity.

On October 29, the president ordered troops to the border, even though the caravan was —and still is— hundreds of miles away. With the midterms in sight, the caravan quickly became an election issue for both Republicans and Democrats. But the reasons migrants travel in a large, attention-grabbing group are not political. For them, the strategy comes down to safety and survival, according to immigration experts.

“There’s a lot of danger in making that trek to the United States, and I think a lot of the migrants think there will be safety in numbers, which is definitely true,” said Sarah Pierce, a policy analyst at the Migration Policy Institute, in a phone interview. “There’s also the benefit of not having to pay smugglers.”

When candidate Trump announced his plan to build a wall along the U.S.-Mexico border, at Mexico’s expense, he described what that wall would entail: “Above and below ground sensors. Towers, aerial surveillance and manpower to supplement the wall, find and dislocate tunnels and keep out criminal cartels.” Trump made that speech in Arizona in August 2016. More than two years later, as president, Trump is faced with the prospect of thousands of Central American migrants reaching the U.S.-Mexico border in a caravan, most of them likely seeking asylum.

Though Trump’s wall has not been built, it would not have deterred the migrants in the caravan, who are not trying to sneak across the border. The narrative about south-north immigration has long focused on individuals who hide from authorities and arrive in the United States undetected. The migrant caravan, however, turns this narrative on its head. Far from being undetected, the group has attracted media attention and more migrants along its way to the border, where many of them will turn themselves into border patrol and apply for asylum. Once they arrive, they must convince border officials they have a credible fear of returning to their home countries. Pierce believes many of them will be deported within a few days.

Economic factors are a large motivator for migration from Central America, but many of these migrants’ claims for asylum stem from violence. Victoria Cervantes, co-coordinator of the Honduras Solidarity Network, first traveled to Honduras in 1999, a year after Hurricane Mitch devastated Central America and killed thousands. She has visited the country several times since, with her last trip in April. Despite the far-reaching destruction of the hurricane, Cervantes says it wasn’t until 2009 —when President Manuel Zelaya was overthrown in a military coup— that the country’s suffering reached the high levels of today.

“I knew Honduras before the coup and certainly there were issues in Honduras,  it’s a poor country, but after the coup, what we have seen is a continuous steady attack on the rule of law, the destruction of democracy, political repression, militarization and murders by the state,” Cervantes said in a phone interview.

Migration from the Northern Triangle countries (Honduras, Guatemala and El Salvador) has been rising for decades. Between 1980 and 2015, the Central American population in the United States has grown nearly tenfold, according to the Migration Policy Institute. Guatemala and El Salvador both experienced years-long civil wars that continue to impact their stability. Furthermore, all three countries have seen a rise in gang culture, in part due to deportation from the United States where some of the largest gangs, including MS-13, originated.

“The conditions from which people are fleeing are not U.S.-generated conditions, but there’s a historical legacy of U.S. involvement in the region that has been far from helpful in putting the countries on the right path,” said Jason Marczak, a Latin American policy expert at the international affairs think tank Atlantic Council, in a phone interview.

Because of prior U.S. involvement in the region, some people, like Cervantes, believe the United States has a responsibility to help the migrants in the caravan. The Honduras Solidarity Network, which is made up of about 30 organizations across North America that are united in their stance against U.S. foreign policy in Honduras, has helped organize events and social media campaigns to inform people about the plight of the Hondurans fleeing their country. Cervantes says they do this, in part, to combat Trump’s comments on Twitter that the migrant caravan is harboring criminals and “unknown Middle Easterners.” The president’s tweets are unlikely to stop the caravan’s progress, but a change in policy could have a big impact.

Sadly, it looks like Mexico’s Police and Military are unable to stop the Caravan heading to the Southern Border of the United States. Criminals and unknown Middle Easterners are mixed in. I have alerted Border Patrol and Military that this is a National Emergy. Must change laws!

“It seems very likely that the closer the migrants get to the U.S. border, the more likely it is that the president will come down with some sort of new hardline policy to try to deter these individuals from coming in the United States,” Pierce, of the Migration Policy Institute, said.

On October 22, Trump threatened on Twitter to cut off aid to the Northern Triangle countries in response to the migrant caravan. The president faced backlash in Congress, including from Republican Sen. Marco Rubio, of Florida, who tweeted that U.S. aid to Honduras and Guatemala “helps us more than them” because it provides training and equipment to stop the flow of drugs to the United States. Others, including Marczak, argue that less aid would only worsen the economic conditions in those countries, prompting increased migration to the United States.

Guatemala, Honduras and El Salvador were not able to do the job of stopping people from leaving their country and coming illegally to the U.S. We will now begin cutting off, or substantially reducing, the massive foreign aid routinely given to them.

Marczak says it’s uncertain what a cut in aid to those countries would actually look like—and who, if anyone, it would benefit. So far, Trump’s tweets have not stopped the migrant caravan. With a second, smaller caravan now trailing the first one in Mexico, the migrants have made it clear they are willing to take the risk.