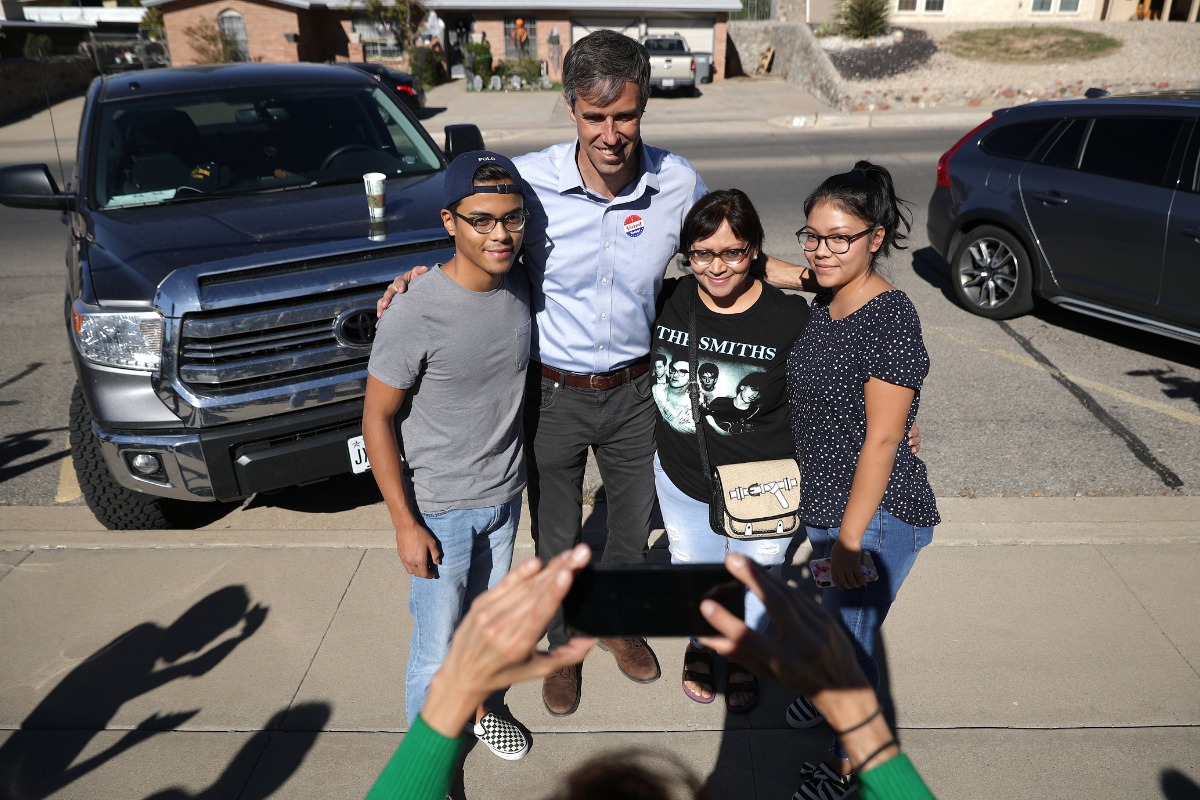 AUSTIN, TX — While Democrats may not have won the war in the race to control both chambers of Congress, they won numerous battles, including control of the House of Representatives, several Democratic governors’ races across the country, and the election of more women and people of color than ever before.

In Texas, one race that catapulted into the spotlight was that between incumbent Ted Cruz (R-TX) and challenger Beto O’Rourke (D-TX) for the coveted Texas Senate seat. To the surprise of most Republicans, and some Democrats, the race was neck-and-neck as election results rolled in Tuesday night, with Cruz winning out in the end. Latinos played critical roles in Texas, both by voting in record numbers and helping elect progressive candidates into office, including Sylvia R. Garcia and Veronica Escobar, the first Latina Texans in Congress.

Experts suggested that a near three percentage point difference between Cruz and O’Rourke sets the stage for a potential blue wave as soon as 2020. All it would take is more Latinos casting ballots, a trend that seems likely after this year’s early votes were counted. In Harris County, a traditionally GOP county and home to Houston, Latinos cast more than four times the total of early votes in 2018 than they did in the 2014 midterm elections. They sent in 133,113 ballots total during early voting, which ended October 22. There were similar trends in other counties with high Latino populations.

“To even have Beto O’Rourke even get within three percentage points of flipping the state is a huge victory for progressives,” Cristina Tzintzun, founder of Jolt Texas, a progressive political mobilization group for Latinos, told Latino Rebels. “It has Republicans shaking in their boots across Texas because they know that by 2020 if they lose Texas they’re done as a party; that their future is uncertain as a party.”

She credited some major upsets in Texas to the work of Latinos. For example, Jolt knocked on the doors of 22,000 Latino voters in Dallas, where incumbent Pete Sessions’ loss was a huge upset for conservatives and ultimately gave Democrats control of the House of Representatives. First-time candidate Colin Allred told the Dallas Morning News his victory is “a message to Washington.”

“I feel like a lot of political pundits worked overtime to paint Latino voters as apathetic or disengaged and the truth is that Latinos in Texas are becoming a political force here in the state,” Tzintzun said. “In Texas, you had 400,000 new Latino voters turn out in 2016, and that made it possible even for the O’Rourke campaign and these other Democratic candidates’ campaigns to be considered serious.”

Tzatzil Willebeek-Lemair, the Hispanic Caucus State Committeewoman at the Texas Democratic Party, echoed Tzintzun’s comments. She said like many women, and Latinas in particular, she got involved in politics after President Donald Trump was voted into office. She quickly noticed more and more progressive Latinas taking key roles and initiatives in the political process.

O’Rourke’s charisma and stance on issue cemented Willebeek-Lemair’s desire to get involved in politics. She organized a barbecue at her home for O’Rourke’s campaign when Democrats were still collecting signatures to put the candidate on the ballot.

“It’s been an incredible year. I’ve met some amazing people. I’d say 95 percent [were] women, especially Hispanic women. Latinas are the heart and soul of this campaign,” Willebeek-Lemair told Latino Rebels. “His entire team here in his El Paso headquarters are young Latinas and they’re so inspiring.”

Young Democrats motivated Willebeek-Lemair to run for Committeewoman at the Hispanic Caucus. “I feel there’s still a lot for the party to do to reach out to Latino voters in Texas and so I really wanted to get involved.”

She is confident that progressives have moved the needle in Texas. She said a year ago, she got laughed at when she told people she was working on O’Rourke’s campaign. They didn’t think he stood a chance.

“I feel like we’re on the right track. It’s, of course, disappointing, but he had a huge impact on a lot of people and I feel like we’ve lost the battle but not the war,” Willebeek-Lemair said.

The marketing guru created a Latinx for Beto page on Facebook during the campaign but was compelled to start Latinas for Beto, a group aimed at women, after noticing participation coming from mostly women. She noticed they were the ones volunteering on the ground and the ones immersed in dialogue online. The group had about 2,000 members within three days of its launch.

Similarly to how Black women made their way to the ballots in Alabama at record rates, and their wins could be attributed in part to Black female voters, she said Latina voters were critical to voter participation in Texas.

So, Texas.
Almost 40% of Latinos and more than 1/3 of Latinas voted for Ted Cruz. pic.twitter.com/9EmJnNJo1R

Willebeek-Lemair also noted that a lack of investment in Latino voters and issues such as voter intimidation may have impacted voter turnout in Texas: one conservative county kept canceling an event she was helping organize. The Democratic County Chair, who happened to be a Latina, told her not to expect a great turnout to the event as Latinos were intimidated by the local sheriff, a white veteran woman who would show up at such events.

Civil rights groups in Texas have accused Texas of implementing voter suppression techniques. During this year’s election, voters experienced issues such as restricted voting hours for college students, translators prohibited from doing their job at polling places with immigrant-heavy communities and old voting machines experiencing technical difficulties that could have resulted in erroneous ballots.

The GOP has defended strict voter ID rules and its redistricting fight —which many speculate is to curb the growing minority vote—  as a means to combat widespread voter fraud. But activists don’t buy it.

“It’s a panoply of voter suppression,” Leah Aden, deputy director of litigation at the NAACP Legal Defense and Education Fund told the Texas Observer. “Texas has actually gotten very good at it.”

Willebeek-Lemair said, therefore, it’s critical for Latinas to become politically active and set an expectation within their personal circle for others to vote.

“If you reach out to a Latina, maybe you have all their family,” Willebeek-Lemair said. “They’re the leaders. They’re the decision-makers. They’re the ones who do the shopping and decide what products the house is buying.”

“We Are Texas,” a recently-released report by Jolt Initiative, found that Latinas are 25 percent more likely to vote than their male counterparts and five percent more likely to vote than other females. On social media, stories came out of young Latinas encouraging their family and friends to vote, including some first-time voters during the midterms.

Anahi Ponce, a junior at the University of Texas at El Paso, was heavily involved in canvassing efforts through Jolt, but she also took it upon herself to encourage the people in her private circle to register to vote. Her grandparents are part of a generation who believes their votes don’t matter, she said. However, she motivated them to vote, including her grandfather who voted for the first time and had been registered since 2000.

She says if more people do what she did then more progressives are almost guaranteed to win in Texas in future elections.

Ponce, who heard O’Rourke’s concession speech live from El Paso, said people were feeling discouraged before he came out on stage. But she focused on the silver lining.

She said the elections of Escobar and Garcia, both of whom defeated their Republican opponents, was a huge win for progressives in Texas. The record-breaking number of people of color and women elected to office nationwide, particularly Alexandria Ocasio-Cortez of New York and the youngest Latina elected to Congress, inspired Ponce.

Ponce added that the tight race between Cruz and O’Rourke says something about how people are feeling in Texas.