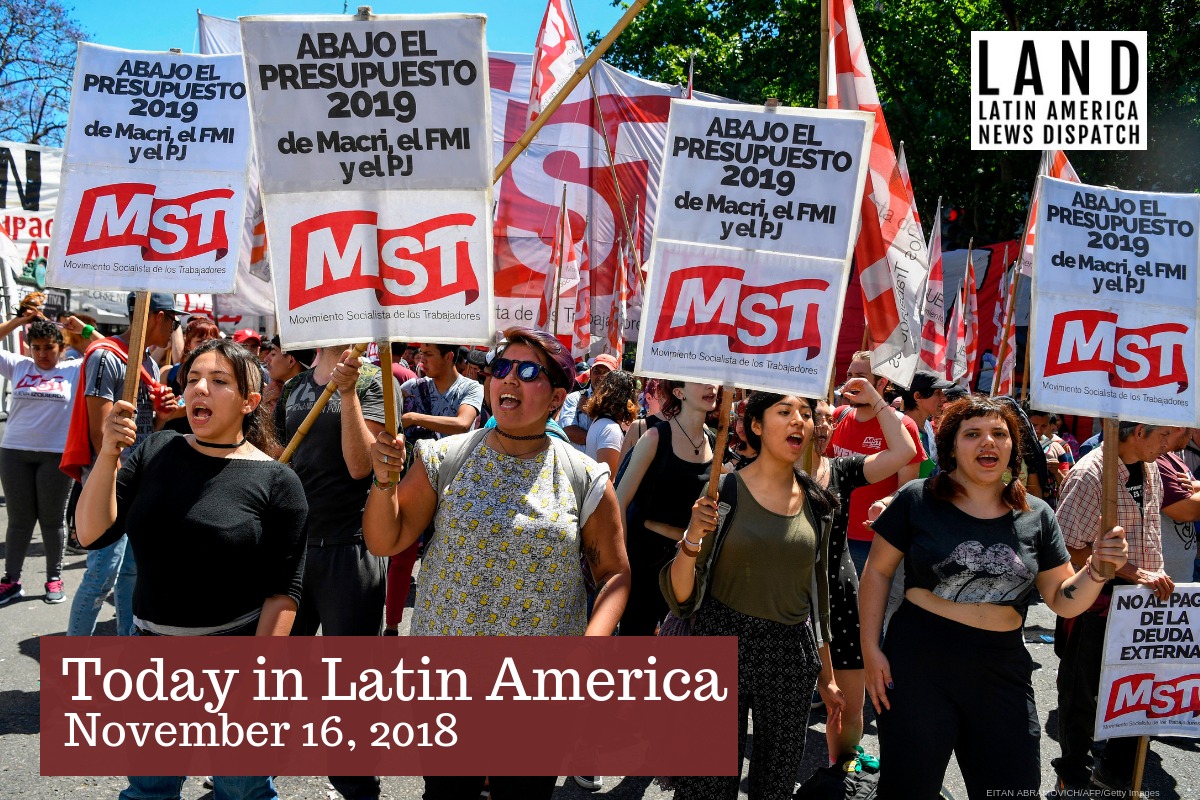 People demonstrate outside the Congress building while Argentine Senators begin to discuss the 2019 budget, in Buenos Aires. November 14, 2018. (Photo by Eitan Abramovich/AFP/Getty Images)

ARGENTINA: Argentina’s senate passed a widely protested austerity budget for 2019 on Thursday morning. President Mauricio Macri celebrated the decision saying “this is something we set out to achieve.” The budget, which had already been approved by the lower legislative chamber, will raise Argentina’s debt payments by 50 percent and drastically reduce spending on school infrastructure, cultural initiatives, housing, and other social programs. Protesters against the proposed budget, brought together by several social and political organizations, called the proposal “inhumane” particularly for those who are already unemployed.

Given the government’s estimate of 23 percent inflation next year, the social spending reductions may reach as high as 35 percent.

“We couldn’t keep living above our means,” Macri said in an interview yesterday, adding that he plans to push for future tax cuts. The austerity measures align with the terms of a $6.3 billion addition to a $50 billion International Monetary Fund loan and come just two weeks before the Group of 20 summit in Buenos Aires. Yesterday, an IMF spokesperson called the new budget a “very positive step” that will be key to “re-establishing confidence” in Argentine markets.

UNITED STATES: The Pentagon does not anticipate sending more troops to reinforce the 5,800 already stationed along the Mexico border, Deputy Defense Secretary Patrick Shanahan said yesterday. President Donald Trump had previously claimed that twice or three times that amount would be needed to keep out a caravan of Central American asylum seekers. Buses carrying some of those migrants arrived in Tijuana yesterday, while others are still hundreds of miles from the border.

MEXICO: The Supreme Court struck down a security law that formalized the government’s authority to deploy the military in a policing capacity. In a 9-1 decision released yesterday, the court found that the Interior Security Law, passed at the insistence of outgoing President Enrique Peña Nieto, not only violated the spirit of the constitution but also proper legislative procedure. The decision came just one day after President-elect Andrés Manuel López Obrador announced a controversial new national security plan that would also incorporate the military in domestic policing.

NICARAGUA: The Colombian government presented its defense before the International Court of Justice in the Hague yesterday, in a maritime dispute brought by Nicaragua. The court already ruled in Nicaragua’s favor in 2012, extending its territory well into the Caribbean Sea. Nicaragua then brought a second suit claiming that Colombia, which has criticized the original decision, conducted Navy activities that violated the boundaries established by the court.

CUBA: A draft of the new constitution went before lawmakers yesterday, ahead of a scheduled referendum on February 24. The new version, created after three months of town hall debates throughout the country, will include provisions for same-sex marriage and the right to private property. A commission of Communist Party officials will amend the text and submit it to the National Assembly for approval in December.

PUERTO RICO: Governor Ricardo Roselló announced yesterday that he will sign a new tax reform bill into law, cutting income taxes on corporations and individuals. There has been speculation that Puerto Rico’s Oversight Board, created by the U.S. Congress in 2016, may reject it due to a provision legalizing slot machines outside of casinos. In that case, Governor Roselló said that the territory will pass the bill in pieces.

ECUADOR: A congressional committee investigating the 2010 murder of Air Force General Jorge Gabela has found sufficient evidence to suspect a “state crime,” according to a final report submitted yesterday. Prior to his death, Gabela had denounced irregularities in the acquisition of a fleet of helicopters. The report calls for further investigation into 68 authorities involved in the purchase, including former President Rafael Correa, who is wanted in Ecuador on kidnapping charges and has requested asylum in Belgium.

ARGENTINA: With two weeks to go before the Group of 20 (G-20) Leaders’ Summit, authorities in Buenos Aires captured twelve suspects yesterday in relation to a pair of failed homemade bombings the day prior. Characterized as anarchists by government officials, the suspects allegedly planted a bomb at the gravesite of a police chief assassinated by anarchists in 1909 and outside the house of a judge who led investigations into the previous left-leaning administration. In a separate raid, two brothers allegedly linked to Hezbollah were also captured in the capital. Police say they found automatic weapons in the brothers’ house.