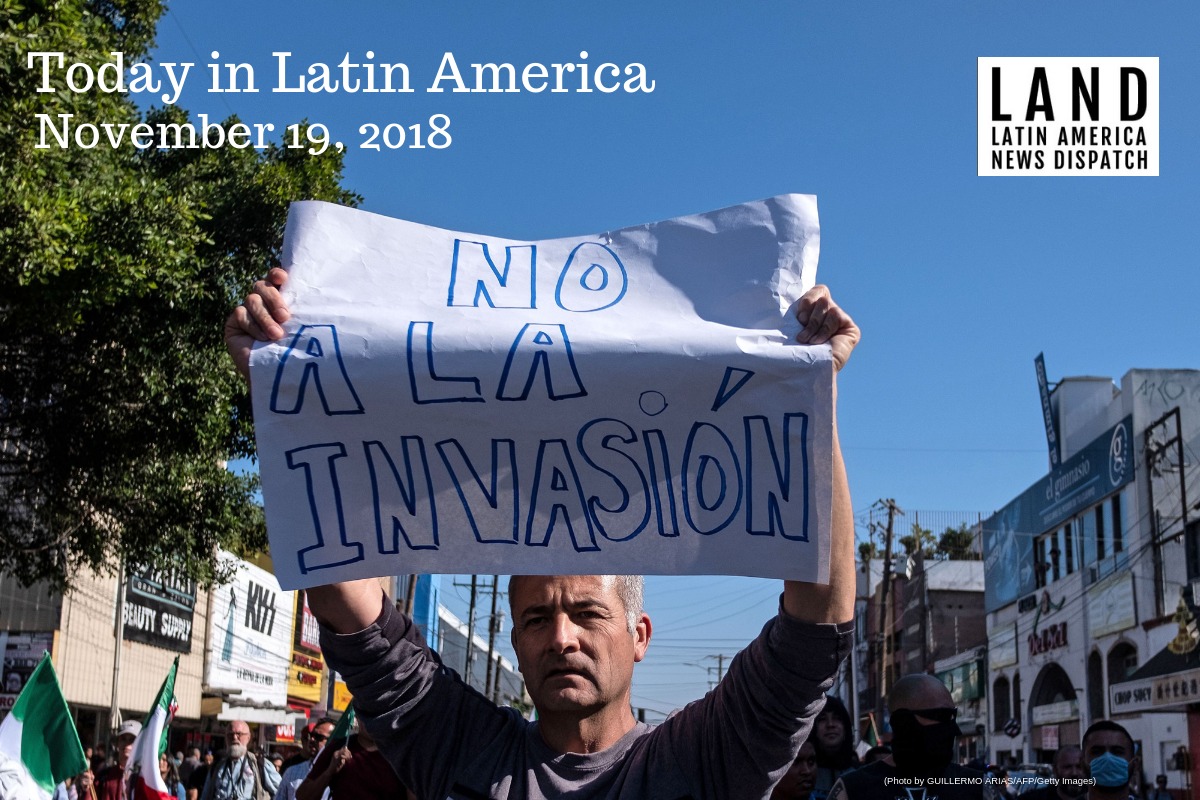 Local residents hold a demonstration against the Central American migrants moving towards the United States and passing and staying in Tijuana, on November 18, 2018, in Tijuana, Baja California, Mexico. (Photo by GUILLERMO ARIAS/AFP/Getty Images)

MEXICO: Just one mile away from the U.S. border, the migrant caravan was received with a protest. Tijuana residents lambasted them and called the caravan an “invasion.” Disgruntled locals chanted “Out! Out!” and defensively sang Mexico’s national anthem, a sharp contrast to other Mexicans who have helped the caravan migrants on their arduous and long journey in the past few weeks. Roughly 3,000 of them arrived in Tijuana over the weekend, a number estimated to rise to 10,000, but some people are afraid that the border town won’t be able to manage the ongoing influx of Central Americans.

At a news conference, Tijuana’s mayor Juan Manuel Gastelum said, “No city in the world is prepared to receive this avalanche.”

Despite tensions, the Mexican government is flying food and blankets to Tijuana. Local officials are providing shelter in a municipal gym, a recreational complex and other private buildings. Reports indicated that it will take at least six months for migrants to file their asylum claims.

MEXICO: Ricardo Monreal Ávila, coordinator of the leftist Morena party in the Senate, will propose an initiative to prohibit and punish companies using advertising strategies to promote their products via text messages and phone calls without authorization from its users. This type of commercial harassment targets up to 135 million phone users, which has led Monreal Ávila to push for reform in order to protect consumers. Sanctions will be proposed for providers that do not comply with new laws.

UNITED STATES: In Arizona, U.S. border patrol agent Lonnie Swartz is on trial for manslaughter in a case that could finally reach a verdict this week. In 2012, Swartz was accused of killing 16-year-old José Antonio Elena Rodríguez for throwing rocks over the international border near Nogales, Mexico, into Arizona. Rodríguez was shot 10 times in the back through a steel fence, but Swartz was never found guilty of murder.

REGION: An international biodiversity conference held by a coalition of environmental agencies emphatically called for a protection of the Caribbean’s coral reefs. The initiative came into being during the 14th Meeting of the Conference of the Parties to the Convention on Biological Diversity (COP14) in Sharm El Sheikh, Egypt. The U.N. Environmental Protection Agency chief Erik Solheim mentioned it is not only climate change but also overfishing and pollution that is putting coral reefs at risk in the Caribbean.

EL SALVADOR: As hundreds of migrants are stalled at the U.S.-Mexico border, a new caravan was formed in San Salvador yesterday. Counting with at least 200 people, the group departed from San Salvador’s central plaza after organizing via social media and WhatsApp. This becomes the fourth caravan to flee the Northern Triangle countries, following the large mobilization that left San Pedro Sula, Honduras, on October 13.

EL SALVADOR: On a report released Thursday, El Salvador ranked as the country with the highest rate of femicides in Latin America. The Economic Commission for Latin America and the Caribbean (ECLAC) and its Gender Equality Observatory stated that at least 2,795 women aged 15 and older were murdered in the region, with El Salvador accounting the largest per capita indicator, at 10.2 for every 100,000 inhabitants. ECLAC also manifested the need to raise consciousness and develop capacities among public officials to improve judicial procedures against femicide. Thus far, 18 Latin American countries have modified legal statutes to adequately address the issue.

VENEZUELA: The Inter-American Commission on Human Rights (IACHD) condemned the Venezuelan government as responsible for the violation of the rights of Linda Loaiza, who was kidnapped, sexually assaulted and tortured. Loaiza was held against her will for four months in 2001 until she was rescued by police. However, her legal fight against her captor was cut short after he was quickly prosecuted and dismissed in 2004. This forced Loaiza to seek international sanctions against the Venezuelan government. She says she now hopes the government will heed the ruling and proceed with the necessary reparations.

PERU: Former President Alan García is seeking asylum in Uruguay afte judges banned him from leaving Peru during a corruption probe linking him to Odebrecht. García, who led the country from 1985 to 1990 and from 2006 to 2011, had his passport retained when a judge ruled to keep him in Peru for 18 months while alleged bribery surrounding the Lima Metro is investigated. This is the second time García has sought asylum in a neighboring country. In 1990, he escaped to Colombia following a raid led by his successor Alberto Fujimori.

BRAZIL: On November 16, Cuba announced that it will be pulling out of the “Mais Médicos” program and recall the 8,332 doctors currently stationed throughout Brazil. President Jair Bolsonaro has asked the Cuban government to pay the doctors’ full salary. He has also requested the doctors to validate their diplomas in Brazil. The program currently provides Cuba $249.5 million.

ARGENTINA: Navy officials confirmed on Friday the discovery of the lost ARA San Juan submarine 270 miles away from the Argentine coast. The submarine had been reported as missing on November 15, 2017, along with its 44 crew members. According to official sources, the submarine experienced an electrical breakdown and canceled its mission to return to base. Although the search for the missing submarine carried on for weeks, it wasn’t until earlier this month that the U.S.-based Ocean Infinity managed to confirm its whereabouts. Argentine authorities, however, lamented the lack of necessary technology and funding to retrieve the lost vessel.