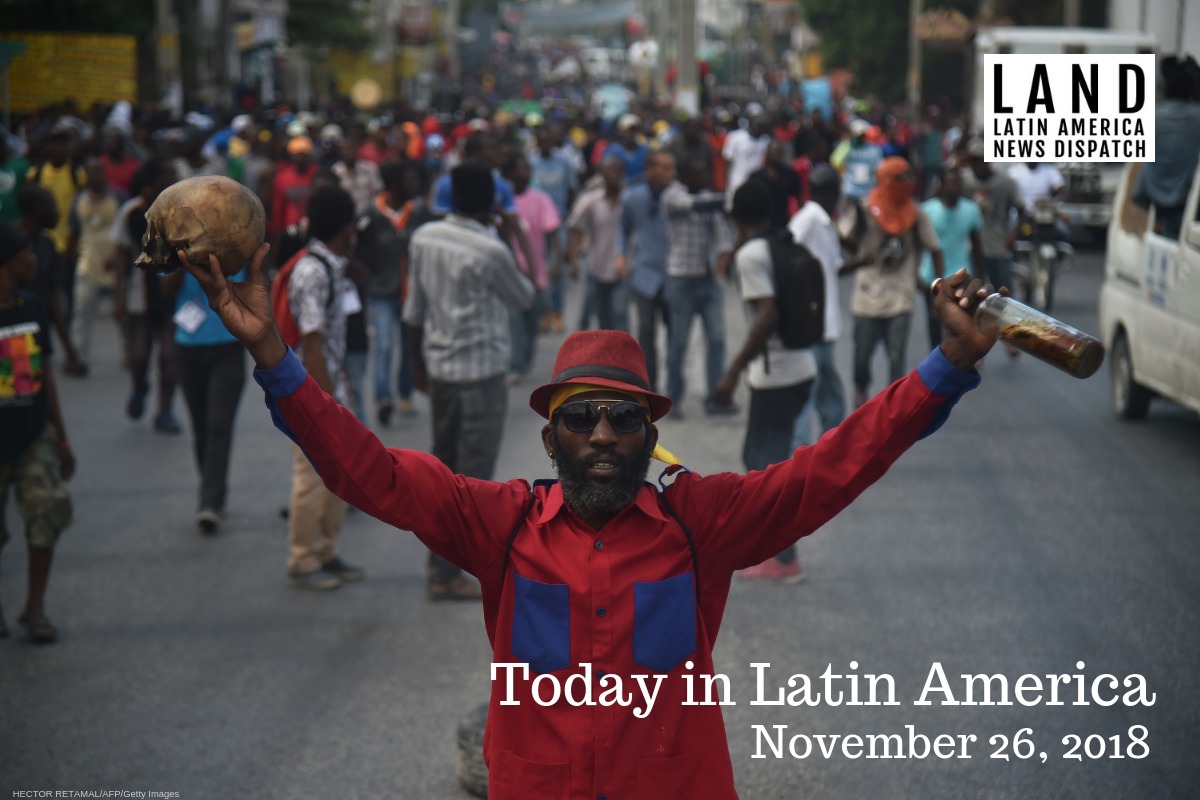 A demonstrator holds a skull during a protest march through the streets of Port-au-Prince, on November 23, 2018. (Photo by Hector Retamal/AFP/Getty Images)

HAITI: On Saturday, six people were killed at the border between Haiti and the Dominican Republic during protests demanding the resignation of Haitian President Jovenel Moïse. Schools and government offices remain shut down amid allegations of corruption involving the previous government and Petrocaribe, an oil alliance between many Caribbean nations and Venezuela. Over a dozen Haitian government officials and firms allegedly embezzled $2 billion in Venezuelan oil loans.

In response, Haiti’s Prime Minister Jean-Henry Céant promised to create jobs in impoverished neighborhoods by enacting a program that would start today. A coalition of opposition parties condemned the president on Friday, criticizing the use of tear gas by police forces to disperse demonstrations. At least 11 people have died in Haiti since the protests started.

THE U.S.- MEXICO BORDER: Mexico’s incoming government denied that a deal was made with the U.S. to catch and detain migrants awaiting for asylum at the border. The proposed agreement, also known as “Remain in Mexico,” would keep migrants and asylum seekers in Mexico instead of the U.S. while their petitions are reviewed. The Department of Homeland Security said that migrants may be restricted to Mexico as early as this week, though logistics are not clear. If that is the case, migrants may have to wait years in Mexico before they can enter the U.S. legally.

THE U.S.- MEXICO BORDER: This weekend, U.S. border agents shot rounds of tear gas at migrants after some of them attempted to cross into the country from Tijuana by squeezing through and climbing over fences. The mayor of Tijuana, Juan Manuel Gastelum, has declared a humanitarian crisis and said he would be requesting assistance from the United Nations to help with shelter, food, and clothing for roughly 5,000 migrants.

MEXICO: President-elect Andrés Manuel López Obrador held a new referendum on 10 policy proposals, six of which aim to benefit students, people with disabilities, and senior citizens. However, the referendum has received criticism for its informality and its strategic method of getting people to vote “yes.” Over one million Mexicans will be voting at the polls, most of which will be located in the southern part of Mexico, near the Mayan Train Project, another big infrastructure proposal. Results may be tallied and available this morning.

CUBA: The first contingent of 211 Cuban doctors working in Brazil returned yesterday to Havana after the Mais Médicos program was terminated by the administration of recently-elected Jair Bolsonaro. The decision has left several health centers in the rural Brazilian periphery without staff. More than 8,000 doctors stationed in Brazil have been recalled by Cuba.

HONDURAS: On Friday, Honduras confirmed that the brother of President Juan Orlando Hernández was detained in Miami on drug charges. Juan Antonio Hernández, former Congressman for the ruling National Party, is expected to appear in federal court today. This comes after the leader of Los Cachiros gang, a criminal organization operating in eastern Honduras, testified in March of having bribed Honduran government officials.

EL SALVADOR: Four more people were added to the seven already in custody for the “black widow” killing scheme in El Salvador, which entails gangs arranging marriages where wives would murder their husbands and collect life insurance policies. Officials reported that among those detained were a doctor and a lawyer, who were part of the Mara Salvatrucha gang. Esmeralda Flores Acosta, the alleged ringleader of the operation, was captured Friday.

COLOMBIA: Despite efforts to substitute the production of coca in local farms, the Colombian government is still struggling to eradicate it. The government has promised local farmers to help them make the necessary to shift and has so far involved around 97,000 farms. But the transition has been slow and difficult. Colombia lacks the funds to provide subsidies to farmers and many have struggled to find buyers.

VENEZUELA: The Venezuelan government requested the extradition of Nervis Villalobos from Spain for his connection with a $2,260 million embezzlement case that involves PDVSA, the Venezuelan state-owned oil, and natural gas company. Villalobos, who served as vice minister of energy for Hugo Chávez, is currently detained in Spain for money laundering and has agreed to be extradited to the U.S. to stand trial. But his lawyer has vehemently rejected Venezuela’s request, saying the regime is famous for its “illegitimacy and for the constant violation of human rights.“

BRAZIL: The concurrent “Car Wash” corruption probe in Brazil has reached a new stage as the federal police issued the arrest warrant of 22 anonymous individuals on Friday. The police announced that 17 of them have already been apprehended but have withheld information regarding the investigation of contracts surrounding the construction of the new Petrobras headquarters in the northern city of Salvador.

PARAGUAY: The Paraguayan government announced its partnership with the South Korea-based Blockchain Technology Foundation to create the world’s largest Bitcoin mining farm. The new project, nicknamed “Golden Goose,” will be located in 50,000 acres and will reportedly save the company 80 percent on operation costs thanks to Paraguay’s electrical power grid.