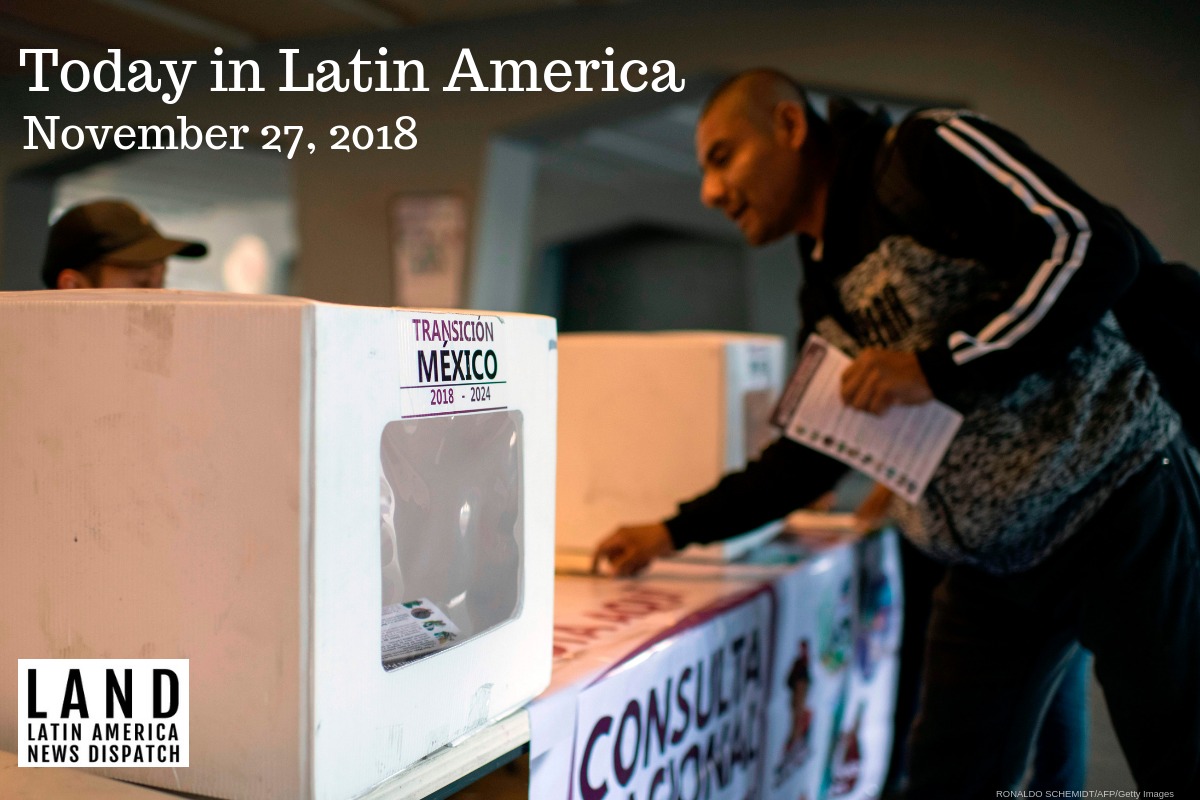 A Mexican casts his vote, during a referendum at a polling station in Mexico City, on November 25, 2018. (Photo by Ronaldo Schemidt/AFP/Getty Images)

López Obrador’s plan for the “Maya Train,” a billion-dollar train that would connect attractions in the Yucatán Peninsula, was the most controversial of the ballot questions. Earlier this month, a group of environmentalists sent López Obrador a petition asking him to reconsider the project. López Obrador accused them of being out of touch with the people. Indigenous groups have also protested the train.

Other proposals passed in the referendum include the construction of an oil refinery, the building of a rail link between the Pacific and the Gulf of Mexico and the offer of free internet. Between 90 and 95 percent of voters approved these proposals. The “Maya Train” measure had the lowest approval rating at 88.9 percent.

THE U.S.-MEXICO BORDER: As Mexico increases security forces, police blocked migrants who were walking toward the border Monday morning and arrested 69 people on the California side after they crossed from Tijuana. Though U.S. authorities completely closed all access at the San Ysidro crossing, migrants still tried to breach the border fence and were met with tear gas. The Mexican Interior Ministry announced they will deport migrant protesters whom they said violently and illegally tried to cross to the U.S. on Sunday.

U.S.: Though tension and confrontation at the Mexico-U.S. border have increased in the last couple of days, President Donald Trump does not “have the ability to rewrite immigration law,” according to lawyer and journalist Jami Floyd. In an interview, Floyd said the president has no legal authority to force asylum-seeking migrants to remain in Mexico. Asylum laws were made by Congress, and only those elected officials have the authority to modify the laws.

TRINIDAD & TOBAGO: In honor of the United Nations’ International Day for the Elimination of Violence Against Women, former Prime Minister Kamla Persad-Bissessar issued a statement decrying the high levels of violence against women in Trinidad and Tobago. Persad-Bissessar is currently the country’s Opposition Leader and hhighest-ranking female official. According to a 2017 National Women’s Health Survey for Trinidad and Tobago, 1 in 3 women who experience intimate partner violence do not report it. Domestic violence is also the largest cause of women’s murders in the country.

HAITI: Following a week of deadly protests, Haitian Prime Minister Jean-Henry Céant announced that a public works program to provide jobs began yesterday. Protests began November 18, calling for President Jovenel Moïse’s resignation. The public works program offers poor residents of Port-au-Prince jobs cleaning canals, picking up trash and building roads. “These are jobs that will be created, economic activity that will be started, and the country will be put back in shape,” Céant said.

HONDURAS: Antonio “Tony” Hernández, a former congressman and the brother of Honduran President Juan Orlando Hernández, was charged in the United States yesterday for his role in transporting tons of cocaine into the country. His charges include conspiracy, weapons possession and lying to U.S. authorities. Prosecutors said Tony Hernández was a big-time drug trafficker whose initials were sometimes stamped on the drugs. Following his brother’s arrest in Miami Friday, President Hernández said, “I hope the justice system gives him the room to defend himself, and as a family, we will do what we can to support him.”

ARGENTINA: The Copa Libertadores soccer final between the Boca Juniors and River Plate was postponed for a second time Sunday after more violence among fans and players. On Saturday, River fans threw stones, sticks and bottles at Boca’s team bus blocks away from the Monumental de Núñez Stadium. Security tensions are high in Argentina as the G-20 comes to the country later this week. The game will be rescheduled, but a date has not yet been set.