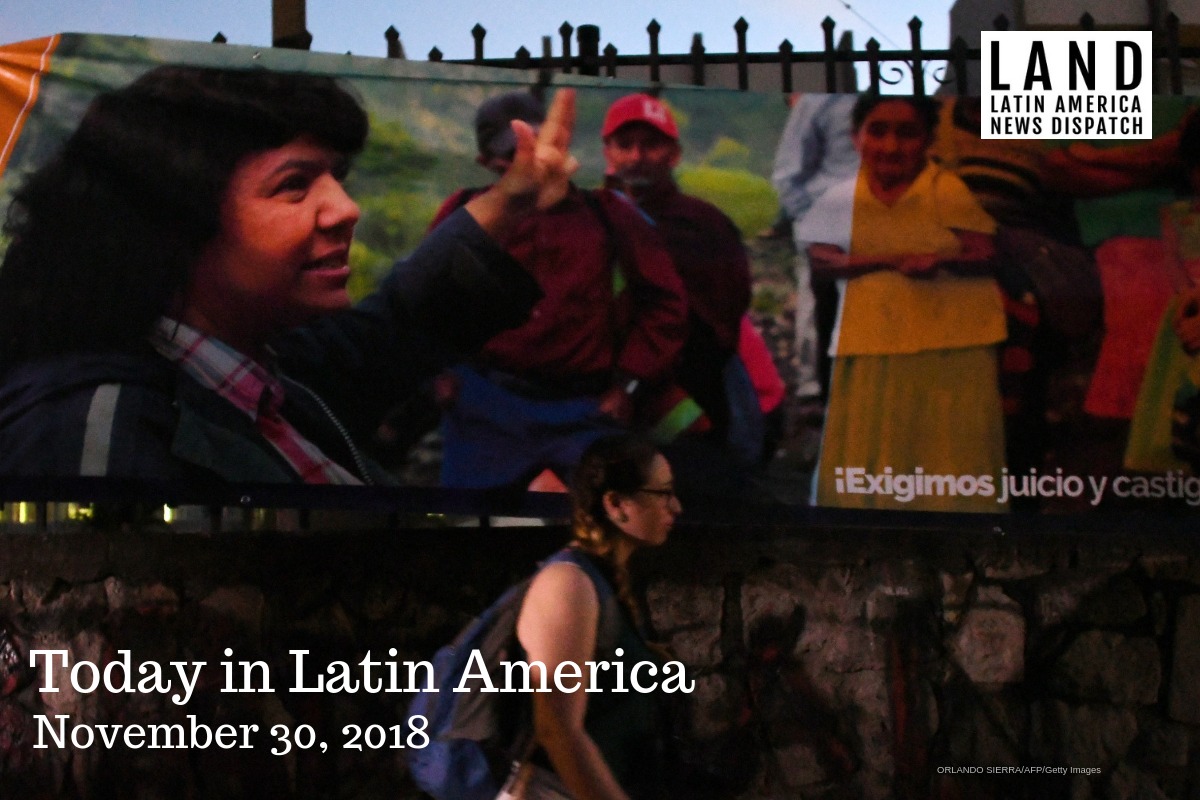 A woman walks past a banner in memory of slain Honduran environmental leader Berta Cáceres during a demonstration to demand justice and punishment for the masterminds behind her murder, in the surroundings of the Sentence Court in Tegucigalpa on November 29, 2018. (Photo by ORLANDO SIERRA/AFP/Getty Images)

HONDURAS:  Seven men were found guilty of the murder of indigenous environmental activist Berta Cáceres last night, with an eighth cleared and freed. Cáceres was shot dead in March 2016, after leading a campaign to fight the internationally financed Agua Zarca hydroelectric dam, which was being built on a river sacred to the Lenca people. Among those convicted were the environmental manager and former chief of security for Desa, the company constructing the dam. From the start, the trial was plagued with allegations of negligence and cover-ups. In one particularly questioned ruling, the presiding judge barred Gustavo Castro, a Mexican environmental activist shot during Cáceres’ assassination, from the proceedings, along with lawyers representing Cáceres’ family.

Cáceres, who won the prestigious 2015 Goldman Environmental Prize, had previously led other campaigns to protect indigenous territories as the general coordinator of the Council of Popular and Indigenous Organizations of Honduras. Her colleagues and family have used the trial to expose Honduras’s dire environmental politics, which are marked by corruption and exploitation by multinational companies. Despite the guilty verdict, Cáceres’s fellow activists and international legal observers still believe the trial’s scope was too narrow and the investigation should be broadened.

U.S.-MEXICO BORDER: Customs and Border Protection will not prosecute the 42 migrants arrested during a Sunday protest, though the agency confirmed Thursday it still intends to deport them. The news came as its sister agency, Immigration and Customs Enforcement, rejected calls to release a report on the death of Roxsana Hernández, a 33-year-old transgender migrant who died in its custody this past May. An autopsy released this week shows evidence that Hernández was severely beaten and dehydrated while in custody.

MEXICO: The ombudsman leading an investigation into the disappearance of the 43 Ayotzinapa students accused the highest levels of government of negligence in a report presented Wednesday. The report, which adds to mounting independent evidence contradicting the federal government’s original version of events, found that the massacre was a direct result of government collusion with organized crime, and describes the failure of state and federal authorities, including outgoing President Enrique Peña Nieto, to intervene.

PUERTO RICO: The Puerto Rican government finalized its first debt-restructuring agreement with creditors yesterday, accounting for more than $4 billion in debt issued by the U.S. territory’s now-defunct Government Development Bank. It is unclear how the agreement, which creates different payment mechanisms for local creditors and so-called “vulture capital” hedge funds, will affect the remaining $70 billion of outstanding debt. Some economists say that even with the restructuring, Puerto Rico may not be able to keep up with its payments.

JAMAICA: The United Nations Educational, Scientific and Cultural Organization recognized reggae music as part of the “intangible cultural heritage of humanity” yesterday, citing its “contribution to international discourse on issues of injustice, resistance, love and humanity.” The genre, “at once cerebral, socio-political, sensual and spiritual,” is the latest hemispheric musical tradition to make the celebrated list, joining Mexican mariachi, Brazilian samba, and many others.

NICARAGUA: Two days after President Daniel Ortega’s administration expelled feminist leader Ana Quirós from the country, allies in the National Assembly canceled yesterday the legal status of the human rights organization she led. The cancellation, enacted on request of the Interior Ministry, will force the the Center for Information and Health Advisory Services to liquidate all its goods and assets to the government.

COLOMBIA: Tens of thousands of demonstrators from across the country took to the streets yesterday to protest education budget deficits, high gas prices, and government noncompliance with a historic 2016 peace agreement. The protests, the largest in a series of mass actions that have marked the first 100 days of Iván Duque’s presidency, were coordinated by university students, agrarian associations, and transportation workers, as well as indigenous and Afro-Colombian groups. The Duque administration announced Wednesday that a new tax bill will cancel a widely unpopular food tax that provided the impetus for the most recent marches.

Enjoyed a wide-ranging, very productive discussion w/ Brazil’s President-elect Bolsonaro & his national security team. I extended an invitation from Pres. Trump for @JairBolsonaro to visit the US. We look forward to a dynamic partnership w/ Brazil. pic.twitter.com/KrGF7mYDaA

ARGENTINA: Leaders from 19 economic powers and the European Union have arrived in Buenos Aires for the Group of 20 summit, which begins today. The meeting is intended to serve as a forum for cooperation, but tensions over Saudi Arabia’s bombing campaign in Yemen, Russia’s capture of Ukrainian vessels, and trade protectionism are expected to dominate this year’s discussions. Outside Congress in Buenos Aires, activists held a People’s Summit Wednesday and Thursday to protest global climate change and the austerity budget Argentina recently approved to meet its debt obligations to the International Monetary Fund.