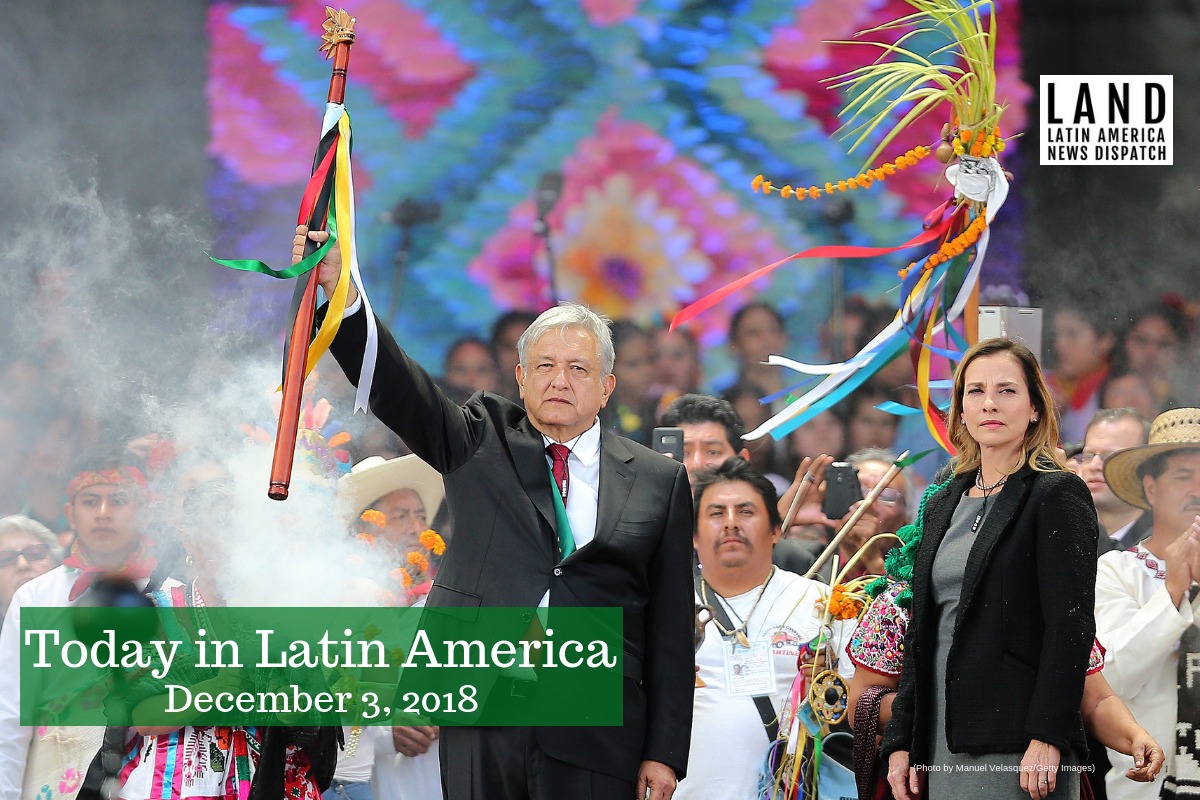 Andrés Manuel López Obrador takes part in an indigenous ceremony during the events of the Presidential Investiture on December 1, 2018 in Mexico City, Mexico. (Photo by Manuel Velasquez/Getty Images)

MEXICO: Andrés Manuel López Obrador, also known as AMLO, assumed his role as Mexican president on Saturday, igniting discussions about migrants, abortion, military affairs, and corruption. After taking an oath to office, AMLO spent the weekend speaking to Congress and making public appearances at the inaugural celebration, a dinner with foreign officials, and a spiritual cleansing ceremony where he vowed to “purify public life in Mexico.”

A frugal leader in comparison to those before him, AMLO refused to live in the presidential residence called Los Pinos. Instead, he opened the private estate and plans to host public events there, starting with an open tour offered to the public. AMLO will live in his home on the south side of the city.

His first step towards radical change started by signing an agreement with other Central American countries to create a “development plan” for the region in order to generate more jobs and reduce poverty that has led many folks, like the ones in the migrant caravan, to flee north.

But not everyone is happy with AMLO’s first acts as president. Conservatives, including El Partido Encuentro Social, on which AMLO ran during his campaign, are disgruntled with his incoming Interior Minister, Olga Sánchez Cordero, for vocally favoring abortion rights. Meanwhile, his decision to use armed national guards to combat gang violence and rampant homicides prompted criticism from supporters that fear militarization in Mexico. AMLO says he will propose the plan in a referendum to seek voter approval. And he promises to dismantle political corruption, but just last week, he left the Mexican people bewildered with another curveball when he said he would not take down former cases of corruption. AMLO says his “focus isn’t vengeance. [He] wants justice.”

MEXICO: Over the weekend, Tijuana’s local government shut down a sports complex sheltering roughly 6,000 migrants due to “bad sanitary conditions,” including mud and infestation that made people vulnerable to respiratory infections. Food and medical services are no longer being offered there. The city established an alternative shelter farther from the U.S.-Mexican border in a former concert venue, El Barretal, 14 miles from San Ysidro, where people line up to apply for asylum. And even as conditions continue to get worse, the caravan launched a hunger strike to protest Mexican police blockades.

CUBA: Last Thursday, the island’s officials accused the Trump administration of denying visas for diplomats assigned to work in the Cuban Embassy in Washington, D.C. In an interview with the Associated Press, Johana Tablada, Cuban deputy head of U.S. affairs, stated that the United States has “stopped replying to multiple requests for visas for our personnel.” The U.S. has denied six visas since September 2017, according to the Cuban Foreign Ministry. Most U.S. diplomats were pulled from the island after two dozen personnel became victims of an alleged “health attack.” Canada has proceeded to review the presence of diplomats in Cuba after over 10 members of their diplomatic staff developed similar health problems.

HONDURAS: Last Tuesday, a Honduran journalist was struck by a bullet while reporting live during protests in front of the Presidential Palace in Tegucigalpa. Geovanny Sierra, affiliated to the television channel UNETV, was shot in the arm. Sierra was taken to the Escuela Universitario Hospital, where he is currently recovering. Led by former president Manuel Zelaya, leader of the opposition, the protests condemn the November 2017 elections as fraudulent. After an hour of confrontations, the demonstrations had to be dissolved with tear gas by Honduran police.

COSTA RICA: After Brazil had to withdraw given budgetary constraints, Costa Rica offered to host the United Nations Climate Change Conference (UNFCCC) next year. The Conference of the Parties (COP 25) is scheduled to take place next year in December. Carlos Manuel Rodríguez, the country’s Minister of Environment and Energy, stated that the Costa Rican government will study the possibility during this year’s COP 24, taking place this week in Katowice, Poland. Barbados and Bahamas have also expressed their desire to host the 2019 UNFCCC.

COLOMBIA and ECUADOR: Thirteen members of a drug-trafficking gang were detained simultaneously in Colombia and Ecuador on Saturday. The operation was coordinated by the police forces of both countries, who had investigated the gang for almost a year. According to Carlos Alulema, head of Ecuador’s national anti-narcotics agency, the drug traffickers mobilized cocaine alongside the border of both nations. He said that almost 2.5 tons of cocaine will be collected by the agency. So far, 77 operatives of the organization have been arrested.

COLOMBIA: Members of indigenous organizations in Colombia lamented the murders of two leaders of the Awa group on Sunday. Héctor Ramiro and his son Arturo García were shot shortly after the latter was elected as governor of the reserve Palmar Medio Imbi in the Ricaurte municipality. Members of the organization have denounced the inactivity of their government and asked for protection after the killings of 10 other members during the last three months. In response, the Colombian Ministry of Interior announced that they will conduct a visit to the area to address the violence against the Awa people.

BRAZIL: President-elect Jair Bolsonaro announced on Friday his plan to cease military activity in Rio de Janeiro. Since February, the military forces have taken the role of acting as the security forces in the city, focusing their efforts on the crackdown of drug-trafficking operations. Bolsonaro plans on ending the military operations on December 31, the day before he starts his term as president of Brazil.

ARGENTINA: In preparations for the G20 summit in Buenos Aires, the Argentine government declared Friday a national holiday and placed a lockdown on key areas of the city. These measures, however, came during a time of controversy and unrest in the country. The once prosperous Buenos Aires has been spiraling out of control, with an attack on soccer players the weekend before the summit and the arrest of suspected bombers and two brothers allegedly linked to Lebanese Hezbollah a few weeks before. Chief of security for the summit Patricia Bullrich suggested that people should consider leaving the city amidst the gathering. However, this proved impossible as major airlines canceled many flights and public transportation workers went on strike several times throughout the week.

Native American Tribes’ Pandemic Response Is Hamstrung By Many Inequities