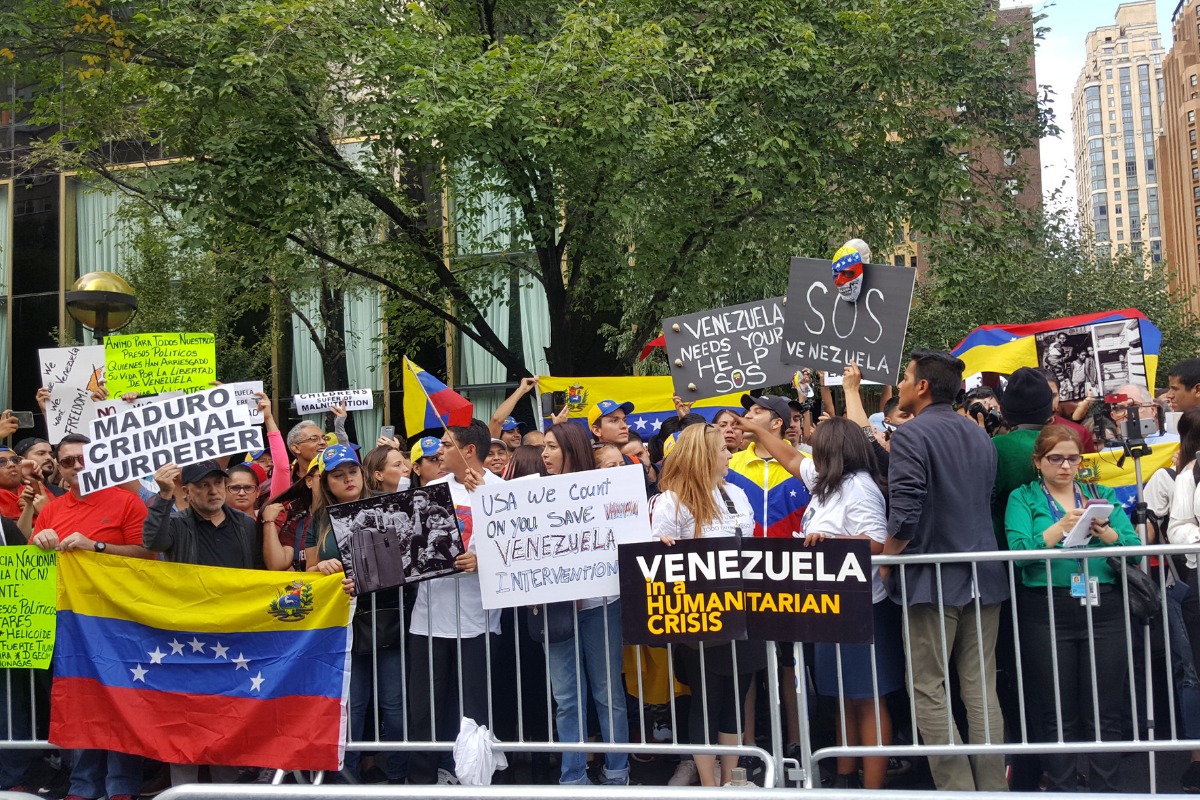 For activists, this is an important moment in Venezuelan politics. Carlos Romero, a retired political science professor at Universidad Central de Venezuela who lives in Caracas, said the international attention is a new element in the Venezuelan crisis.

“This is the most difficult moment we have had since 2002 when there was a military coup against Hugo Chávez,” he said. “Not only because of the worry over humanitarian crisis, but also because the government and the diaspora are looking for international support.”

Some Venezuelan dissidents welcome sanctions. “All the sanctions against are positive and I believe they have to continue,” said Luisa Sumoza, 32, a Venezuelan dissident seeking asylum in the U.S. She spoke to Latino USA during a protest outside the United Nations’ headquarters in New York City. “The money the government is spending is not to benefit the people, but the government officials and people close to them.”

Sumoza used to lead student protests against the government in her hometown, Maracay, about an hour by car from the capital of Caracas. One night, as she was driving home with another protester from a political meeting, she says four men riding two motorcycles stopped them, beat them and left them on the ground. She believes it was the government after a second attack occurred about seven months later when she said a car with the government symbol tried to run over her and her mother. That’s when she knew she had to flee.

People like Sumoza are part of a rapidly growing Venezuelan community in the United States that by 2015 had already reached an all-time high of 321,000, according to the Pew Research Center. Just two years before, the community had been just 248,000 people.

Maduro continues to reiterate that the crisis is being fabricated. A supporter of Maduro told Latino USA during the President’s appearance at New York’s Riverside Church, that he agrees.

In September, a bipartisan group of senators proposed a humanitarian package, plus more pressure on Maduro’s government. The $58 million Venezuelan Humanitarian Relief, Reconstruction and Rule of Law Act of 2018 would not only offer humanitarian relief but also put economic pressure on Venezuela’s allies. Meanwhile last week, the U.N. announced it released $9.2 million in emergency funds for Venezuela.

Listen in as journalist Paula Moura gives an update on the current crisis in Venezuela. She discusses some of the suppression against dissidents in the country, and explains how activists organize protests in New York City in hopes of increasing international pressures against the Venezuelan government.