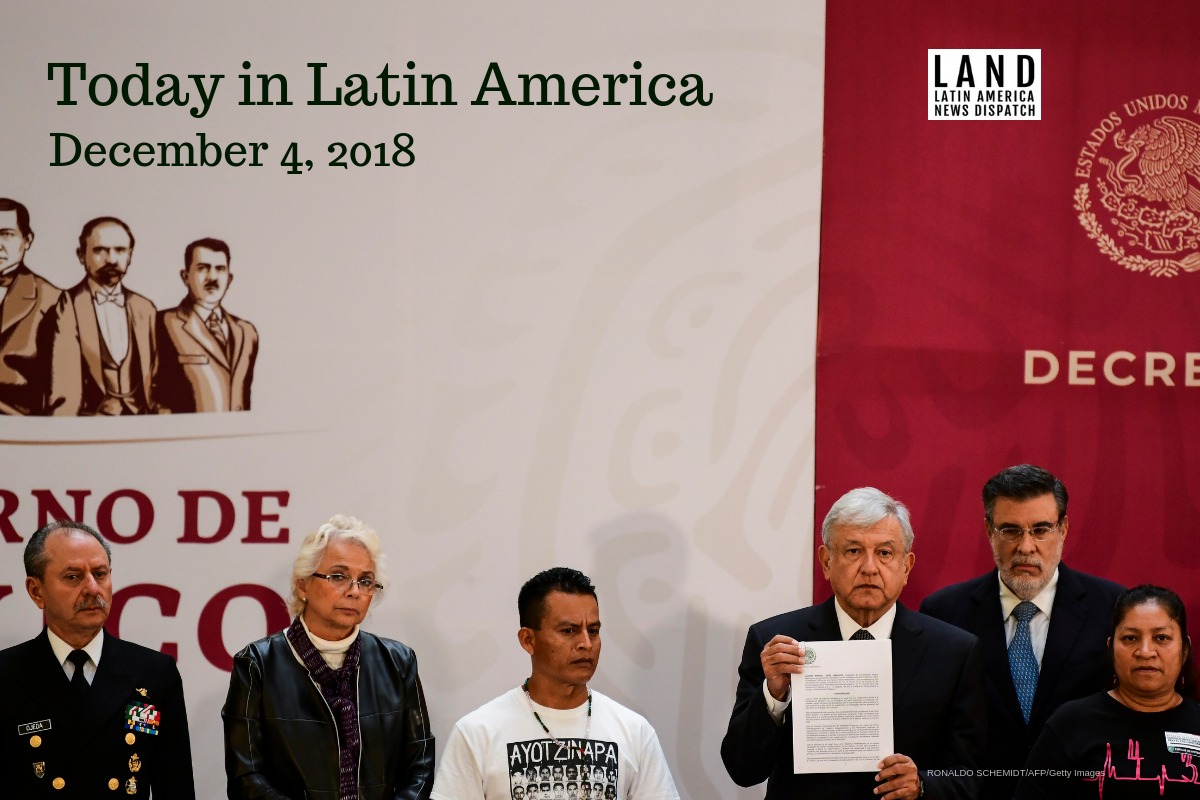 Mexico's President Andrés Manuel López Obrador shows the signed decree to investigate the case of 43 missing students, during a ceremony with relatives of the students, at the National Palace in Mexico City on December 3, 2018.(Photo by RONALDO SCHEMIDT/AFP/Getty Images)

MEXICO: President Andrés Manuel López Obrador began his first Monday as president with a 7am press meeting. “Isn’t that a change that I am here, informing you?” he asked the 100 journalists present. As of now, López Obrador has promised to deliver daily press conferences.

In addition to that commitment, López Obrador created a truth commission to continue investigating the kidnapping and probable murder of 43 students from Ayotzinapa. Family members of the missing students have been angry with the government’s response so far, and several attended National Palace during the signing. López Obrador told them “there will be no impunity in this case.”

A major topic at yesterday’s press conference was the economic impact of the cancelled airport project. The administration has offered to buy bonds from investors involved in the project. López Obrador announced the project would not go through after an October referendum in which a majority of the few voters who participated rejected it. The President also described plans to sell “all the planes and helicopters that the corrupt politicians used.” Divesting of Mexico’s presidential plane —valued at $218 million— was a promise López Obrador repeated throughout his campaign. It is one of 60 government planes and 70 helicopters to go up for sale, according to the finance minister.

UNITED STATES: Congress will have to approve about $450 billion in funding for several government agencies by Friday or push them into a partial shutdown. With Democrats and President Trump arguing over border wall funding, lawmakers are reaching for a two-week extension. Trump is asking for $5 billion dollars for the wall, which is estimated to cost more than $25 billion, It could cost even more, triggering lawsuits if the government seizes private property. The State Department, Department of Homeland Security, Department of Agriculture, and other agencies will lose funding if lawmakers do not act.

PUERTO RICO: The Puerto Rico Planning Board has released a report stating that Hurricane Maria had a $43 billion impact on the country’s economy. The report is based on calculations from public and private sector questionnaires and statistics, and takes into account relief and insurance funds. The $43 billion calculation is $1 billion more than previously estimated. The report also states that San Juan experienced $100 billion worth of damage from the hurricane.

GUYANA: Minister of Public Infrastructure David Patterson presented a report on the November 9 Fly Jamaica crash to the Guyana Cabinet Monday. The Fly Jamaica plane was on route to Toronto, Canada, when it experienced technical difficulties and attempted to land at the Cheddi Jagan International Airport but overshot the runway. Rookia Kalloo, an 86-year-old Guyanese woman on the flight, died four days after the crash. Fly Jamaica said it is investigating her death. Four Guyanese fire officers, who arrived at the crash and allegedly stole personal luggage, were charged with simple larceny last week and are scheduled to appear in court on December 12.

PANAMA: Indigenous Panamanians recently competed to determine which athletes would represent the country in the World Indigenous Peoples Games this year. The competition drew athletes from the Guna, Embera and Ngabe-Bugle communities for a two-day event in the town of Pirati in late November. Panama has competed in the World Indigenous Peoples Games twice before: first in Brazil in 2015 and again in Canada in 2017. The activities at the Panama trials this year included archery, tug-of-war, soccer, spear throwing, swimming and boating.

PERU: Uruguay denied asylum to Peru’s ex-president Alan García yesterday. García went to the residence of the Uruguayan ambassador in Lima on November 17 ,seeking asylum after he was accused of taking bribes from the Brazilian construction company Odebrecht. He has denied the accusations. Uruguayan President Tabaré Vázquez said he rejected García’s asylum claim because all three branches of government in Peru “function freely and autonomously.”

VENEZUELA: Rubén González, the well-known leader of the Sindicato de Trabajadores de Ferrominera Orinoco union, was detained over the weekend for organizing protests against President Nicolás Maduro. The military arrested him with a group of other leaders while returning from Caracas, where he was protesting against poor working conditions. Union sources say González will face a military trial, though the charges are unknown. The labor protests are happening as Venezuela’s economy continues to suffer, causing thousands of Venezuelans to leave the country.

ECUADOR: President Lenin Moreno suspended Vice President María Alejandra Vicuña yesterday. Vicuña faces allegations of taking bribes from an assistant when she was in the National Assembly. The country’s head prosecutor began an investigation into the case last week. Vicuña has rejected the accusations, but in a letter to Moreno, she asked to be released from her responsibilities through December. For now, an aide named Jose Briones holds the Vice Presidency, which Vicuña took from Jorge Glas less than a year ago. Glas is serving time for corruption in a case involving Odebrecht.

CHILE: A Chilean judge convicted 53 former secret police agents for their participation in the kidnapping and disappearance of seven communist leaders and the murder of former Communist Party head Victor Diaz during the dictatorship of Augusto Pinochet. The former agents will spend up to 20 years in prison. In 1976, the agents lured the victims to a home and then took them to a prison where they were tortured, authorities said.

Native American Tribes’ Pandemic Response Is Hamstrung By Many Inequities