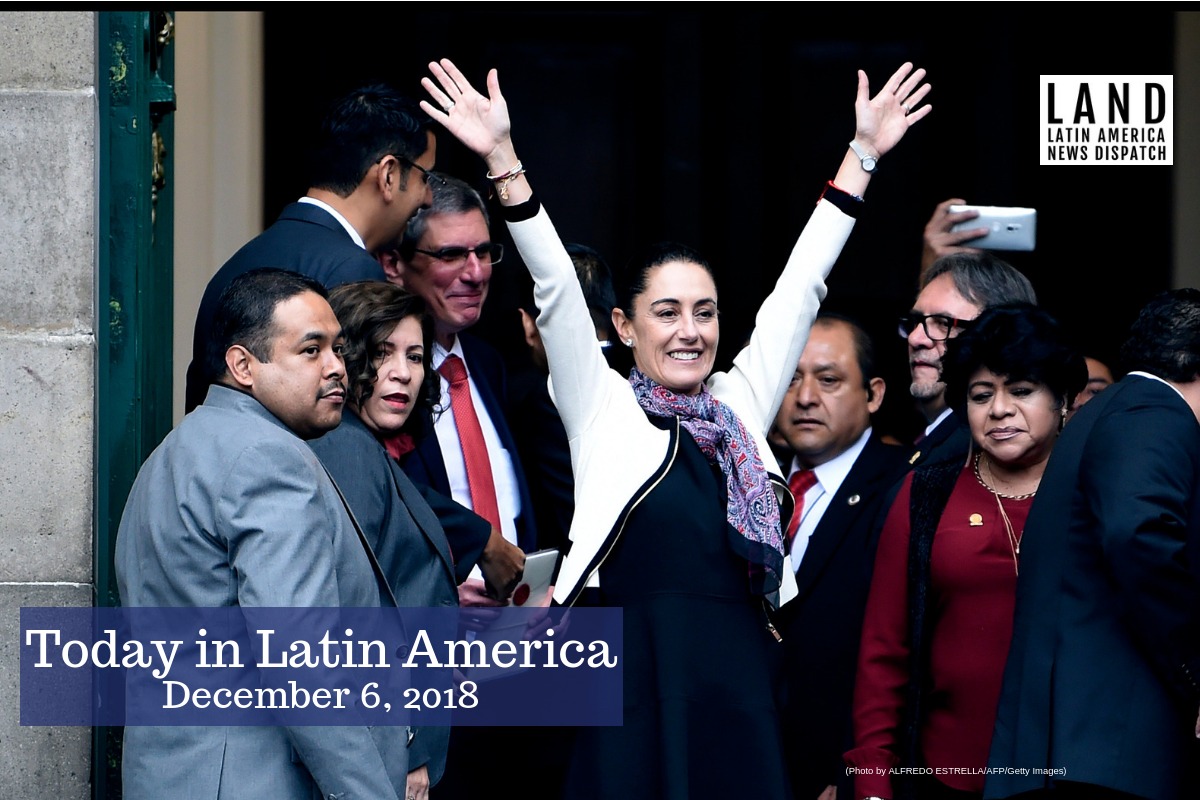 Newly elected Mexico City's Governor Claudia Sheinbaum (center) waves upon her arrival to be sworn in at the local Congress in Mexico City on December 5, 2018. (Photo by ALFREDO ESTRELLA/AFP/Getty Images)

MEXICO: Claudia Sheinbaum, Mexico City’s first elected female mayor was sworn into office yesterday. Sheinbaum is a member of Morena, the same party of Mexico’s new president Andrés Manuel López Obrador. During her inauguration speech, she announced she was dissolving the riot police.

The dissolution of riot police, known as granaderos, demonstrates a willingness to take action to ameliorate the violence of October 2, 1968, where hundreds of students were massacred by police forces. About this, Sheinbaum said, “The police are there to protect the people, and we don’t need a police force to repress them.”

MEXICO: President López Obrador said yesterday that the awarding of oil-exploration contracts will stop for the next three years. López Obrador said he wants to see levels of investment and production by current contractors during the hiatus, pledging to not cancel any existing contracts.

JAMAICA: Selling sugar-sweetened beverages outside and inside of schools will be forbidden by the Jamaican Government, as an effort to contain non-communicable diseases like hypertension and obesity. The Health Ministry also plans to recruit 100 dietitians and nutritionists to encourage and monitor the population to stop drinking those beverages.

NICARAGUA: Nardo Sequeira, former legislator for the Opposition, and farmer Benjamin Siles were found guilty of organized crime and carrying illegal weapons. They were both active protesters against the regime of President Daniel Ortega. Sequeira was sentenced to eight years in prison, while Siles was sentenced to three.

COLOMBIA: A legislative commission re-opened an investigation into Attorney General Néstor Humberto Martínez’s involvement in a deepening corruption scandal. Prior to assuming office, Martínez represented Colombia’s largest banking group in a major infrastructure partnership with disgraced Brazilian construction giant Odebrecht. New evidence, including audio recordings and whistleblower testimony, suggests he knew of proven bribe payments to Colombian officials. The investigative committee is chaired by a representative whose party continues to back Martínez.

VENEZUELA: Russian President Vladimir Putin voiced support for Nicolás Maduro’s embattled administration yesterday, following a meeting between the two leaders outside Moscow. Maduro traveled to Russia to seek further financial assistance and aid from one of Venezuela’s major international backers and few remaining creditors. Putin praised Maduro and condemned “any actions that are clearly terrorist in nature” against him.

BOLIVIA: The top electoral court approved Evo Morales to run for a fourth consecutive presidential term Tuesday night. The opposition tried to stop him from becoming a candidate citing a constitutional limit of the number of times a personal us allowed to run for the reelection. Several protests were organized to reject the decision.

BRAZIL: Top executives at multinational commodity giants Glencore, Vitol, and Trafigura authorized more than $30 million in bribe payments to the state-owned Petrobras oil company, prosecutors said yesterday. The alleged payments were skimmed off profits from artificially low oil trades and storage contracts. The prosecutors believe the scheme, which would mark the most significant international involvement in widespread Brazilian corruption, may still be active.