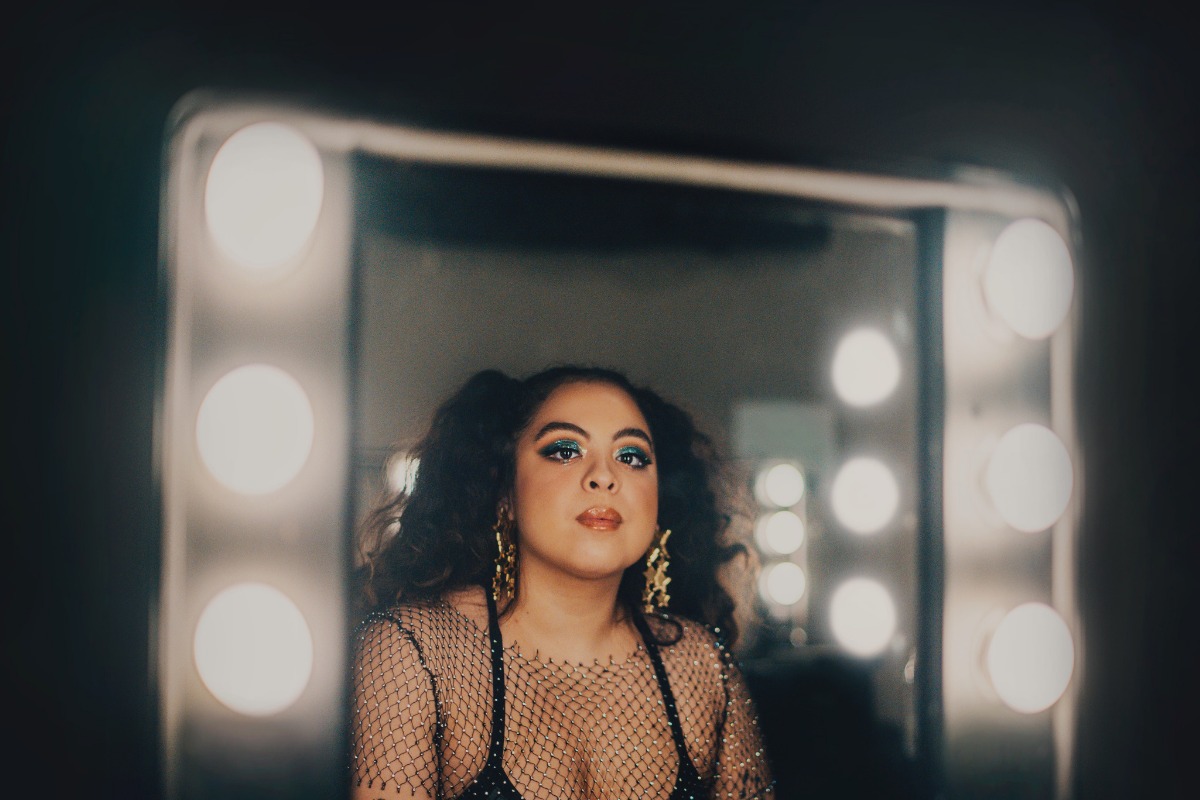 KAINA behind the scenes of a 2018 concert. (Photo by Glenda Lissette/@glendalissette)

Since the rise of major hits like Luis Fonsi’s “Despacito” (featuring Daddy Yankee) and J Balvin’s “Mi Gente,” Latin music, specifically reggaeton, has established a stronger foothold in the American music mainstream. In 2018, hits like Cardi B’s “I Like It” and Spanish-language-only collaborations like Bad Bunny’s “Mia” (featuring Drake) served as proof that it was more than just a passing trend. This, coupled with a shift in music distribution as streaming platforms like Spotify, Tidal, and Soundcloud become more popular, means that indie artists of Latin American descent are also embracing more visibility.

And in Chicago, Latinx indie artists are now part of a scene that is increasingly thriving.

“It has become easier for artists like me, Omar Apollo and Cuco to start singing in Spanish,” said Victor “VICTOR!” Cervantes, a local Chicago artist who struggled with embracing his identity. “People are seeing this as a new era of music.”

“Pachanga,” a popular monthly Latin music party, celebrates the growing DIY (Do-It-Yourself) scene. On the Friday before Halloween of 2018, for example, people danced to Drake’s voice playing over cumbia beats. Others waited in line to get their face painted, Calavera-style: a decorative skull rooted in the Mexican tradition of El Día De Los Muertos, or The Day of The Dead. By the bar, people showcased their elaborate costumes while waiting for the drink of the night, La Llorona, the East Room’s rendition of the classic tequila-based Paloma. And plastered on the walls were posters for an upcoming event promoting Chicago based Latin artists.

Part of Chicago’s growing DIY music scene, Latino USA spoke with four artists about their “in-betweenness” as U.S.-born or U.S.-based Latinos and about how music has become an avenue by which they can explore their identity. By mixing music styles across cultures and balancing their duality, while embracing their individuality, these artists are among those shaping the local scene.

The music of Dos Santos fuses influences from cumbia, salsa, to classic rock and jazz. The group of five —Peter Vale, Alex Chavez, Daniel Villarreal-Carrillo, Jaime Garza and Nathan Karagianis— made their debut in May 2013, after lead vocalist Chavez moved to Chicago and found that there was a void of cumbia being performed.

“In the beginning, it was based in cumbia. It was a psychedelic and aggressive sound,” Vale, the percussionist of Dos Santos, said. “But then, I’d say that the evolution of the group is more open and is a different sound. I know that many people have tried to classify what type of music we play, but it’s not possible.”

Beyond blending a range of styles, the music Dos Santos creates is in Spanglish because that is the language that is most natural to them.

“When Alex dropped the lyrics to ‘return y regreso,’ we didn’t even flinch to his lyrics and the fact that they were in English,” Vale said. “It was only when an interviewer pointed that out, which made me realize, ‘Woah that’s true! We have something in English!’ Other artists and bands are bilingual too. Down to the DJs who will play a Boogaloo song in English, it was an infectious Latin beat with English lyrics over the top. That kind of music is representative of Spanglish.”

Vale insisted that both his accent and the Spanish language are part of his Latin identity, as well as the Latin identity of Dos Santos.

“When I listen to ‘Hotel California’ from The Eagles, I am listening to them with Latino ears. When I hear something by Michael McDonald and want to do my own cover, it would have my own accent,” Vale said. “Being Latino, no matter what you do, is going to be perceived as having an accent. It’s about how well you’re going to embrace that. I embrace it fully. My music has an accent, and I am proud of that.”

Vale describes the music of Dos Santos as a mix of rock, cumbia, and a Latin-American sound.

“Later on, we began to mix some Caribbean sounds and Afrobeat; it’s kind of dark and psychedelic. But at the same time it’s very conscientious. It’s important to us that our music says something and represents something.”

Vale said that growing up, his mother owned an extensive vinyl collection, and he recalled listening to a lot of classic rock, like Michael McDonald and the Doobie Brothers, The Eagles and Kenny Loggins. Then there was also a lot of salsa, like Frankie Ruiz.

“My mom put on these records, so I didn’t have a choice in what we were listening to. But it definitely shaped what I enjoy listening to,” Vale said. “The older Salsa recordings from the 70s would come on. My mom would grab me, and we’d start dancing in the living room. When you listen to music and you associate it to some kind of moment, like dancing with mom, how can you not fall in love with that music?”

First-generation Mexican indie-pop singer Tatiana Hazel began building her following at age 13 through social media, when she released her first original songs on YouTube. Hazel posted her first song in Spanish: a cover of Mexican artist Carla Morrison’s “Hasta La Piel.” While she loved the song, her comment section was filled with strong criticism from followers who attacked her accent.

“I was so embarrassed. I speak it fluently, so I was like, ‘What?’” said Hazel.

From Missy Elliott to Slipknot, Hazel’s two older sisters exposed her to a diverse repertoire of American music at a young age. Despite not liking the traditional Latin music her parents listened to, she was attracted to indie-pop Mexican artists such as Carla Morrison, Julieta Venegas, and Ximena Sariñana. These influences set the foundation for Hazel’s artistry.

“I didn’t think it was possible for me to do things in Spanish. They showed me the best of both worlds,” Hazel said.

Hazel’s first Spanish song, “Dímelo,” attracted one of the Latin Music Programmers at Apple Music, who messaged her on Instagram and had included her on several playlists. The following month, after playing a show in L.A, Hazel performed her EP “Toxic” to the Apple Music staff. As a result, she was also introduced to the Indie music programmer, who also added Hazel to certain playlists.

The 21-year-old artist and fashion designer said she continues to make music in Spanish, English, and Spanglish, despite her critics. Her mixture of both languages pushes the boundaries of traditional music genres. When it comes to her songwriting process, language choice is not made intentional. Instead, her language choice is just a reflection of living in two cultures, a process that comes naturally to Hazel.

“I feel like some people might hear one song that I did in Spanish and think that’s all I do,” she said. “Other people might know me for my whole EP, which is more like a pop, English sound. I think it just depends on what people listen to. Personally, I don’t consider myself one thing,” said Hazel.

Victor Cervantes, aka VICTOR!, likens his music to a thick blanket.

“When you go washing and you just dried all of your clothes, it smells like softener,” the singer said. “You take your blanket out of the drier and wrap yourself in it. That’s how my music kind of feels.”

While many 18-year-olds are completing their college applications, Cervantes spends his days recording music and making beats. The Mexican-American artist grew up in the city-encapsulated suburb of Cicero, Illinois. He was first exposed to music through singing at church, and shortly after, making church music turned into making music for himself and his friends.

“I was writing songs for my youth group, but then I felt that was kind of boring,” said Cervantes. “I started writing my own stuff, and since I already knew how to make beats, I started making my own songs.”

Cervantes grew up listening to Eydie Gormé, Los Panchos and the Mexican rock band Maná. Cervantes said he is grateful for the growing interest in Latin music in the U.S. and while some worry this national fixation could lead to cultural appropriation, he sees it as an opportunity for Latinos to shape how the U.S. perceives them.

He believes the increased attention directed towards Latinx artists gives them a platform and a voice, which could increase understanding of the Latinx community.

As a first-generation Mexican living in the U.S., Cervantes said it is difficult to embrace his culture through language. When growing up around white friends, Cervantes was careful to never speak Spanish, scared of what they would think. However, as he grew older and began to embrace his Latin identity, he felt more confident exploring the language through music, incorporating lyrics in both Spanish and English into his more recent songs.

“We feel more comfortable in our own skin,” said Cervantes.

The 22-year-old artist Kaina Castillo, aka KAINA, comes from a varied musical background. Raised in the Irving Park neighborhood of Chicago, she grew up listening to Motown records and Salsa artists, like Celia Cruz, at her parents’ parties.

Though frequently categorized as soul or R&B, her songs also combine elements of music from her childhood. along with what she described  a “softness and sweetness that came naturally as a songwriter.”

Castillo grew up speaking Spanish, but like many first-generation children, she stopped feeling pressure from her parents to speak the language as she got older. Over time, she began to forget words.

Though many of her young Latinx music peers write songs in both English and Spanish, Castillo focuses on English.

“It almost feels like I’m appropriating something that is definitely already mine,” Castillo said of writing original music in Spanish, and instead favors incorporating Spanish covers into her live sets.

Though Castillo has been performing for six years as part of various projects, she released her first EP under the name KAINA in 2016: “sweet asl.,” a collaboration with fellow locals Bedows and the Burns Twins. She has since released a solo EP, “4u,” a track collaborating with Sen Morimoto, and solo single in August of 2018.

KAINA said she blends her musical influences, but at times, feels uncomfortable with the space she occupies culturally as a relatively light-skinned, first-generation Latina growing up in Chicago.

“There are so many privileges I have and so many that I don’t,” Castillo said. “There’s this weird feeling of being mixed but you’re not, neither am I not.”

i have a recap, do u want to see it? can we drop a 💅🏼 if yes? by @glendalissette 💘 y gracias @redbullmusic

Castillo said that she has been able to explore her identity as a Latina and help her audience do the same. She described her main fan base as “really young Latinas,” and that fans often tell her that her shows helped them connect to their Latina identity in a way that they do not on a daily basis. But for Castillo herself, she said figuring out what it means for her to be a Latina artist is an ongoing process.

“Finding my identity as a Latina is going to be a continuous struggle,” Castillo said, “You can talk to anyone who makes music, who is Latinx, and their story is going to be completely different from mine, and that’s part of it.”