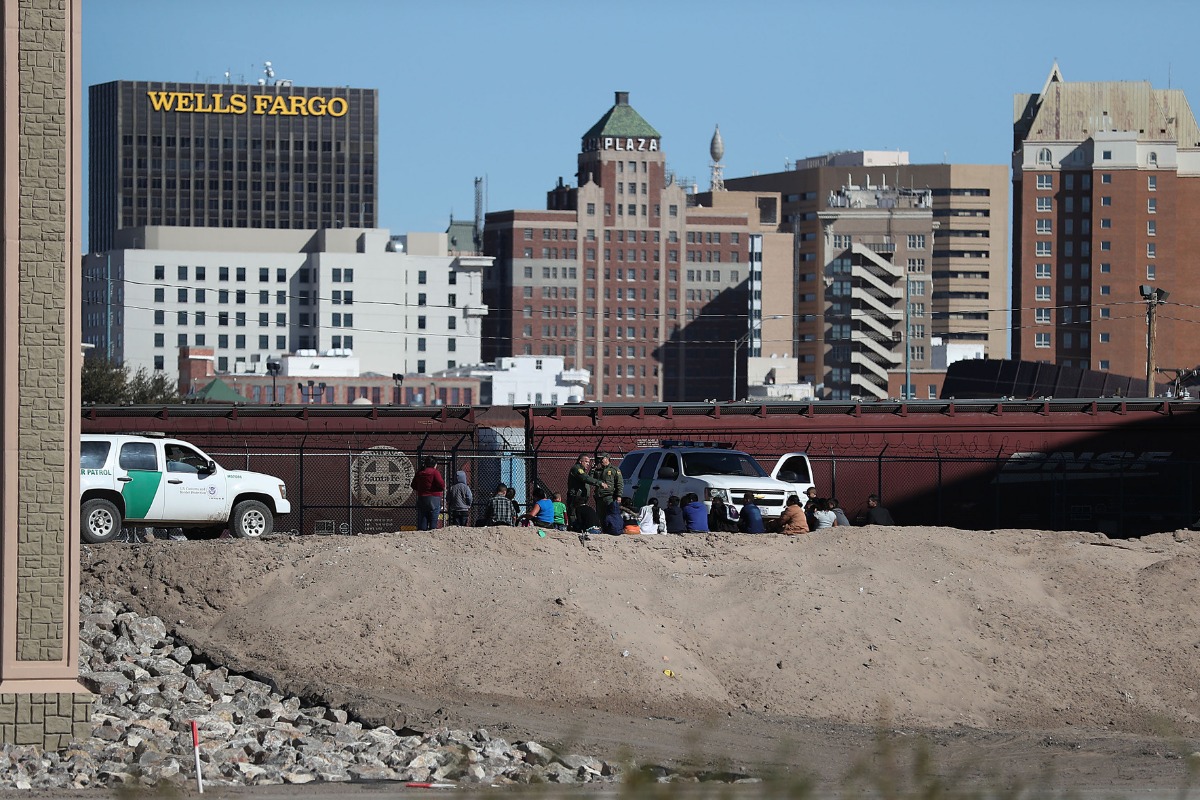 A group of people turn themselves over to U.S. Border Patrol agents after crossing the Rio Grande river from Mexico as they ask for asylum consideration on January 13, 2019 in El Paso, Texas. (Photo by Joe Raedle/Getty Images)

For three years, first as a presidential candidate, then as president of the United States, Donald Trump has insisted that the country must stem immigration by building a wall along its southern border—an expensive gambit that few Americans support and that Democratic lawmakers virulently oppose.

Now, he’s even shut down the federal government over this unmet campaign promise. In a January 8 televised address, Trump insisted that it would stay closed until Congress agreed to a $5.7 billion steel barrier to “protect our country.”

But is there a crisis at the southern border?

Unlawful border crossings have actually declined since 2014, when 569,236 people —most of them Central American— were detained at the southern border, according to U.S. Customs and Border Protection. Last year, 521,090 migrants were caught trying to enter the country unlawfully.

Here, immigration experts explain who’s trying to get into the United States, what they want, and why immigration, even undocumented immigration, actually benefits the country.

1. Most Central American Migrants Are Asylum-seekers

Central American migration is heavily driven by fear, according to researcher Jonathan Hiskey of Vanderbilt University.

“An increasing number of individuals are now arriving at the U.S. southwest border because of crime, violence and insecurity in Central America,” he writes.

People who’ve been victims of crime multiple times are most likely to emigrate, Hiskey says. Rather than trying to sneak across the U.S. border, refugees from violence typically surrender at the border and ask for asylum.

While overall crime and violence have declined across Central America in recent years, one population is in more danger.

“Youth homicides in the region are now over 20 per 100,000 – that’s four times the global average,” says immigration researcher Julio Ernesto Acuna Garcia. “Homicide rates among people aged 19 or younger have been steadily rising since 2008,” largely due to gang violence.

Those stunning statistics explain why so many children and families keep arriving at the U.S.-Mexico border, despite harsh deterrance.

3. Most Migrants Are Turned Away

The majority of asylum-seekers at the U.S.-Mexico border today won’t be allowed to stay.

Asylum-seekers must demonstrate persecution based on race, nationality, religion, political opinion or social group. Central Americans typically “struggle to fit their experiences into the boxes created by the law,” says Stepnitz.

More than 75 percent of asylum claims filed by Salvadorans, Hondurans, and Guatemalans are denied.

4. The Border Is Not a National Security Threat

Trump tends to ignore the fact that most Central American migrants are refugees from violence.

Instead, administration officials falsely claim that immigrants are criminals, or that Middle Eastern terrorists are infiltrating the country’s southern border. In doing so, they create the impression that the border is a national security threat.

This strategy is called the “politics of insecurity,” writes University of Saskatchewan policy researcher Daniel Béland, and it’s a favorite of populists worldwide.

In “creating or exacerbating threats they seek to protect ordinary people against,” leaders can fabricate a sense of urgency that justifies extreme measures, Béland says.

Governments often “downplay, inflate, or even fabricate perceived threats to increase their electoral and political support.”

The Salvadoran street gang MS-13, in particular, has played a starring role in many Trump threats, as it did in his recent televised address.

Anthony Fontes, a professor at the American University School of International Service, studies MS-13. He says conservative politicians often leverage the brutal image of this Salvadoran street gang to serve their political agendas.

“Because its membership is primarily Latino, MS-13 helps Republicans make a crucial link between immigration and violence in voters’ minds,” says Fontes.

That association is factually unfounded.

6. Immigration Is Good for the Economy

Immigrants, even those who enter the country unlawfully, often benefit the American economy, too.

Undocumented immigrants make up more than half of the nation’s farmworkers and 15 percent of construction laborers.

The rise in border enforcement and immigration raids under the Trump administration has particularly hurt farmers, Dudley says.

“One New York apple grower told us that due to labor shortages and dwindling prices … he plans to let his 100-year-old orchard go, because any investments in production would result in significant economic loss.”