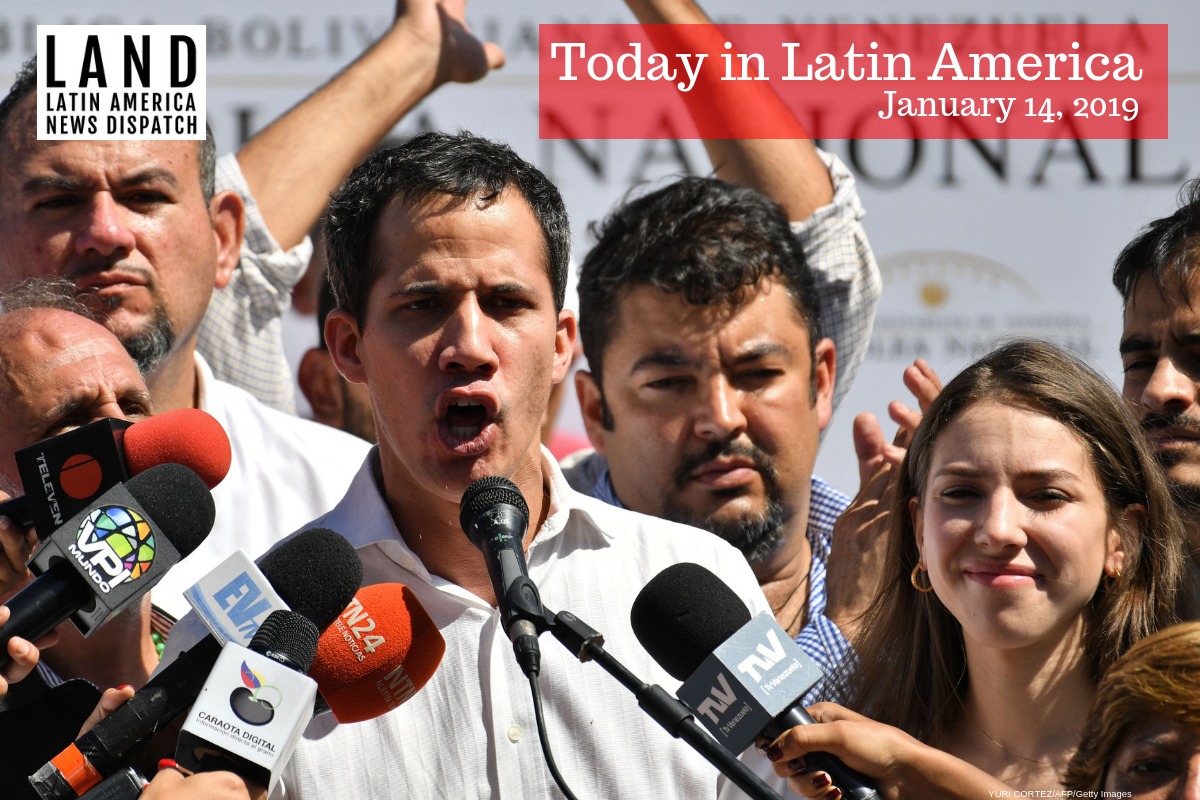 VENEZUELA: Political tension in Venezuela rose over the weekend, culminating with the arrest of the president of the National Assembly on Sunday as he headed to a town hall meeting against the administration of President Nicolás Maduro. A video shot by a motorist on the road to the city of La Guaira shows several men wearing ski masks apparently shoving Juan Guaidó into an SUV. Though the video does not confirm the man was Guaidó, the congressman and his wife both said he was detained. In response to the statements made by Guaidó, Communications Minister Jorge Rodríguez said it was possible that the arrest was orchestrated by the opposition in order to stir international support. He added, however, that police officers did participate in the arrest and are now in custody.

Guaidó has been locked in a standoff with Maduro since the president’s second inauguration on January 10. On Friday, Guaidó announced he was ready to take over as interim president and hold new elections for Venezuela. Shortly after, the U.S. State Department, the government of Brazil and other regional governments expressed their support for Guaidó. Guaidó also called for a national strike on January 23, which is the anniversary of the 1958 overthrow of military dictator Marcos Pérez Jiménez.

UNITED STATES: The government shutdown, caused by gridlock over President Donald Trump’s push for funding a border wall with Mexico, became the longest one in U.S. history over the weekend. Now in its 24th day, it has surpassed the previous record of 21 days under President Bill Clinton in 1995. The shutdown is a partial one, with about 800,000 federal workers not getting their paychecks. More Americans blame Trump and the Republicans in Congress than the Democrats for the shutdown, according to a Washington Post-ABC News poll, whose results were released yesterday.

MEXICO: As the fuel shortage drags on in Mexico, President Andrés Manuel López Obrador (AMLO) ordered helicopters and 4,000 more troops to monitor fuel depots and pipelines on Friday. The shutdown of some oil pipelines, which caused the shortage, is part of AMLO’s plan to combat oil thieves, who illegally drill into pipelines. The head of Mexico’s employers’ federation said the fuel shortage has amounted to an economic loss of $60 million, and lines at gas stations continue to grow.

MEXICO: In just two days last week, 30 people were killed in gang-related shootings near the town of Miguel Alemán in the Mexican state of Tamaulipas, which borders the United States. On Friday, Mexican officials said a soldier and five assailants were killed as gunmen fought an army patrol. The day before, officials announced 24 men had been killed near the same town in a battle between drug cartels.

HONDURAS: A member of the migrant caravan was killed in Honduras one week after he was deported from the United States. Last Tuesday night, Nelson Espinal, 28, was shot 15 times outside of his residence in the José Ulloa neighborhood of Tegucigalpa, known to be under the control of the Barrio 18 gang. A new migrant caravan bound for Mexico is expected to depart from San Pedro Sula tomorrow.

NICARAGUA: A former Supreme Court justice accused President Daniel Ortega and his wife of “running a brutal government,” according to a New York Times report. In his resignation letter, judge Rafael Solís warned that the country is “closer to civil war” than ever before. A long-time supporter of the regime and a former Sandinista, Solís, 73, was President Ortega’s best man during his wedding with current first lady and Vice President Rosario Murillo.

PUERTO RICO: In a fundraising effort for hurricane relief, Lin-Manuel Miranda performed the Broadway show “Hamilton” for the first time in Puerto Rico on Friday. For 17 days, the musical will play at the Centro de Bellas Artes Luis. A. Berré in San Juan. In the audience, Friday were more than 30 American legislators from the Democratic party, who expressed their concern regarding the devastation caused by Hurricane Maria.

ECUADOR: The Confederation of Indigenous Nationalities in Ecuador announced Saturday that they will lead a progressive national strike on January 28 in a rejection of new economic measures imposed by the government. The measures, decreed by President Lenín Moreno on December 18, 2018, include a $1.48 increase per gallon of gasoline. Since then, groups across Ecuador have rallied against the measures. The Confederation made a call for all of those organizations to join the national strike, fearing that the new policies will only hurt the poor and rural communities.

BRAZIL: Waves of violence escalated in Brazil as criminal gangs blew up a transmission tower and a car dealership in the northeastern state of Ceará. According to the public security department, 194 attacks have been reported throughout Fortaleza and 50 other cities and have led to the detainment of at least 150 suspects. The attacks have occurred in the last 11 days, allegedly as retaliation for the state’s plans to tighten security and control in the penitentiary system. In response, the governor of Ceará announced a program to reward people for information that could lead to the arrest of the leader of the attacks.