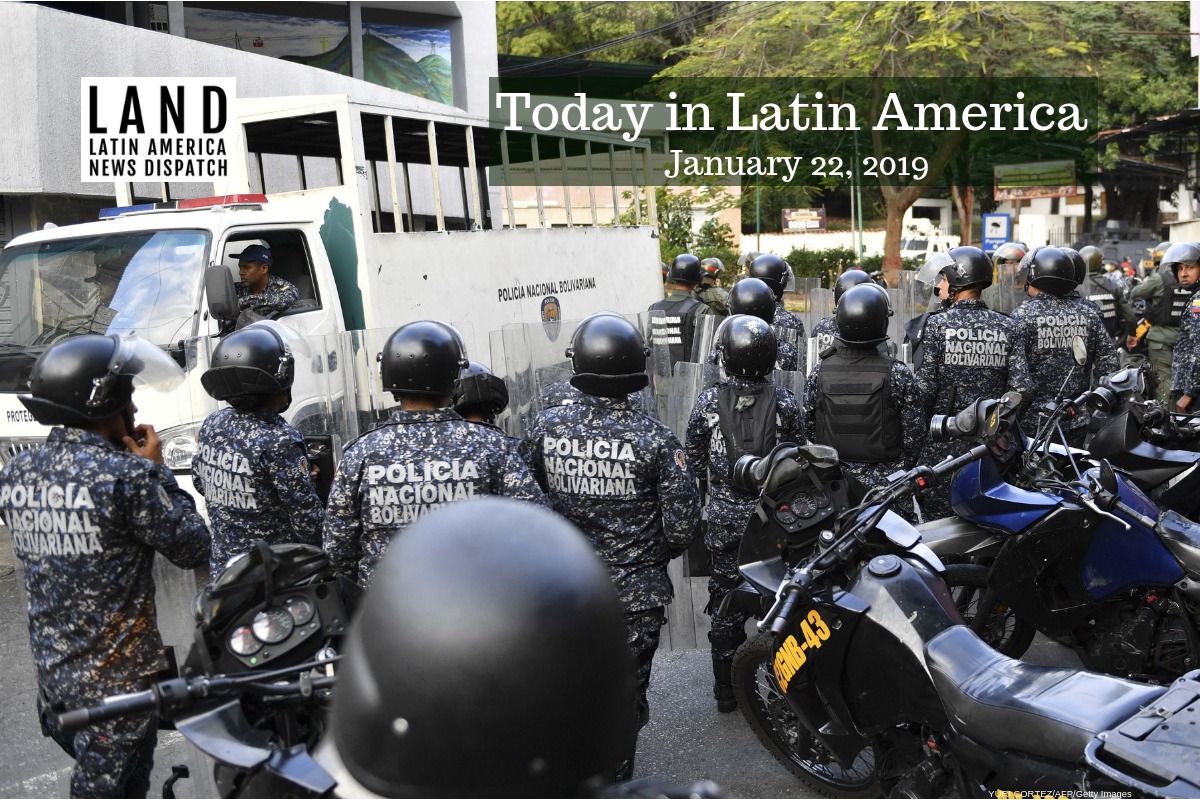 VENEZUELA: At least 40 members of the National Guard in the Cotiza neighborhood of Caracas revolted against the Nicolás Maduro government yesterday morning. According to defense minister Vladimir Padrino López, the revolt was an act of treason and at least 27 officers were arrested for the mutiny. The incident quickly flooded social media as videos from some of the sergeants surfaced calling for the Venezuelan population to demonstrate their discontent with the current administration.

MEXICO: The death toll from Friday’s pipeline fire officially rose to 89 yesterday, with an additional 51 victims suffering from severe burns still in the hospital. The fire started after an illegal pipeline tap ignited on Friday. The government reported yesterday that it found almost 15,000 illegal taps in 2018. The new administration of President Andrés Manuel López Obrador has been working to combat the problem since he took office on December 1. As the government conscripted gas tankers and marine reinforcements, the pipeline explosion only served to reinforce the already dire situation.

MEXICO: As violence continues to rise in the state of Quintana Roo, Mexican authorities yesterday said that three gunmen shot to death seven people in the Mexican resort city of Cancún. The homicides, which came just two weeks after seven men were shot to death at a bar in the nearby city of Playa del Carmen, were suspected to be drug-related.

UNITED STATES: After Speaker of the House Nancy Pelosi rejected President Trump’s proposal to end the shutdown by funding the border wall in exchange for limited protections for Dreamers, Trump again attacked her on Twitter yesterday, questioning her views on existing walls.

If Nancy Pelosi thinks that Walls are “immoral,” why isn’t she requesting that we take down all of the existing Walls between the U.S. and Mexico, even the new ones just built in San Diego at their very strong urging. Let millions of unchecked “strangers” just flow into the U.S.

This comes as Trump’s approval suffers among his base, with a new NPR/PBS NewsHour/Marist poll finding that his net approval rating had dropped 7 points since December.

JAMAICA: The Jamaican Stock Exchange is the “world’s best-performing” stock market. Over the last five years, the Jamaican Stock Exchange has declared gains of 300 percent, posting performances better than indexes such as the Standard & Poor’s 500. Experts point at Jamaica’s control of its public debt, increasing foreign direct investment and decreasing unemployment as key to the rise of its domestic stock market. The World Bank ranks Jamaica as the top nation in Latin America and the Caribbean and the sixth-best nation in the world in terms of ease of doing business.

EL SALVADOR: Following a violent start to 2019, the Salvadoran National Civilian Police (PNC) organized a large deployment of security forces and made 318 arrests over the weekend. Howard Cotto, Director of the PNC stated that 187 of the arrested individuals are “direct members” of Mara Salvatrucha, also known as the MS-13 street gang. Between January 1 and January 16, 169 homicides were registered in El Salvador.

NICARAGUA: Yesterday, Carlos Fernando Chamorro, a prominent Nicaraguan journalist whose offices were raided by the police in December of last year, fled to Costa Rica, fearing government persecution. Chamorro is the editor of the online news site El Confidencial and a commentator on “Tonight” and “This Week” shows. Chamorro has been a fierce critic of President Daniel Ortega’s administration, often citing his crackdown on media and free speech. In a final op-ed before departing Nicaragua, Chamorro pledged to continue “independent journalism from exile.”

COLOMBIA: The revolutionary Marxist group National Liberation Army (ELN) has officially claimed responsibility for the car bombing that took the lives of 21 individuals and injured 68 others in the Santander Police Academy. The ELN declared that the facility was a “military installation” and therefore the attack against the facility was legally permitted under its right to war, as all the victims were “active combatants.” In response to the declaration, High Commissioner for Peace Miguel Ceballos asked for Cuba, the host of previous peace talks, to arrest leaders of the ELN living on the island for violating the accords. Peace talks for the ELN began during the previous presidency but reached a stalemate last year.

BRAZIL: The Council for Financial Activities Control is reportedly investigating payments of $1.8 million to and from the personal account of the former driver of the president’s son, Sen.-elect Flavio Bolsonaro. According to Flavio Bolsonaro, the payments are not related to a corruption scheme and any charges should be levied at the driver. The investigation is quickly casting a shadow over President Bolsonaro, his family and his anti-corruption platform.