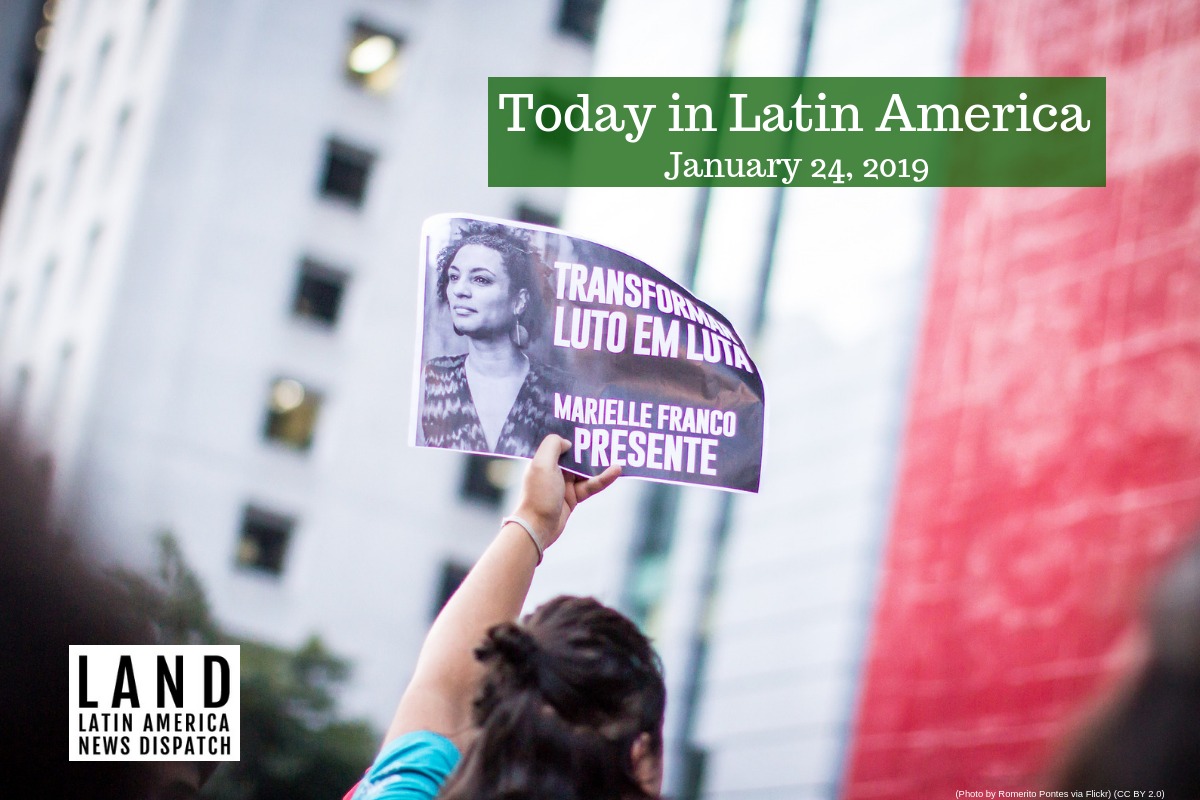 A protester holds a sign depicting Marielle Franco. (Photo by Romerito Pontes/Flickr/CC BY 2.0)

BRAZIL: On Tuesday morning, Rio’s Public Ministry and Civil Police released arrest warrants against five men who are suspected to be involved in the killing of city council member Marielle Franco last March in Rio de Janeiro. This included Adriano Magalhães da Nóbrega, a former police officer who has been identified as a key suspect by six witnesses. Nóbrega, who has multiple links to Jair Bolsonaro’s family, had previously been expelled from the police force for his involvement in one of Rio’s largest organized crime syndicates.

The suspects are members of the Batalhão de Operações Policiais Especiais (BOPE), the militia that authorities claim controls the neighborhood of Rio das Pedras in Rio’s West Zone. According to witnesses cited in a police report, the hitman did not act alone in the murder of Franco and authorities believe that at least two other BOPE officers were directly involved in the killing. BOPE was founded as an elite unit within Rio’s Military Police Force in 1978 and consists of soldiers trained at Brazilian taxpayer’s expense.

MEXICO: In a statement yesterday, the López Obrador administration announced it was continuing to recognize Nicolás Maduro as the legitimate president of Venezuela. Mexico’s statement came in the midst of national protests in Venezuela and a day after U.S. Vice President Mike Pence called on Venezuela’s people to “make your voices heard” against Maduro, who he called a “dictator with no legitimate claim to power.”

MEXICO: The death toll from the pipeline fire continues to rise, reaching 95 yesterday with 44 additional victims in the hospital with severe burns. The fire started after an illegal pipeline tap ignited last Friday in the Mexican state of Hidalgo. The Mexican government found 14,894 illegal taps throughout Mexico in 2018, which it is actively trying to fight through alternate transportation.

NICARAGUA:  Following attacks on journalists and growing censorship of the press, Orlando Castillo, director of Telcor, a technical company, was ordered to shut down channel 12, the central independent news station for Nicaraguan news. The channel hosts shows like “Esta Noche” and “Esta Semana” which are directed by journalist Carlos Fernando Chamorro, whose newspaper station, El Confidencial, was attacked in December 2018. Chamorro, now in exile in Costa Rica, announced that his shows would continue to broadcast on Youtube and Facebook Live despite Daniel Ortega’s latest censorship blow.

ECUADOR: Julian Assange, the founder of Wikileaks, launched a legal challenge against the Trump administration yesterday with the Washington-based Inter-American Commission of Human Rights in an attempt to prevent his possible extradition to the United States. Assange is currently staying in the Ecuadorian embassy in London, although Ecuador has recently signaled that it wants Assange to leave. In November, it was inadvertently revealed in a court filing that the U.S. Justice Department had filed criminal charges against Assange. With this latest court challenge, Assange hopes to unseal these secret charges.

VENEZUELA: On Wednesday afternoon Venezuelan opposition leader Juan Guaidó declared himself Venezuela’s interim president before hundreds of thousands of protestors in Caracas, and shortly thereafter the United States, Canada, Brazil, Colombia, and Paraguay all formally recognized Guaidó as Venezuela’s president and called for Nicolás Maduro to step down. In the late afternoon, Maduro declared that Venezuela break all diplomatic ties with the United States and has given all U.S. diplomats 72 hours to leave the country.

BRAZIL: On Wednesday Jair Bolsonaro revealed plans to privatize and complete the Trans-Amazonian Highway, which was intended to cut through the Amazonas state and reach the border with Peru. The highway’s construction began during Brazil’s era of dictatorship in the 1970s but was largely abandoned and never completed and has already faced widespread criticism due to its hand in extensive deforestation.