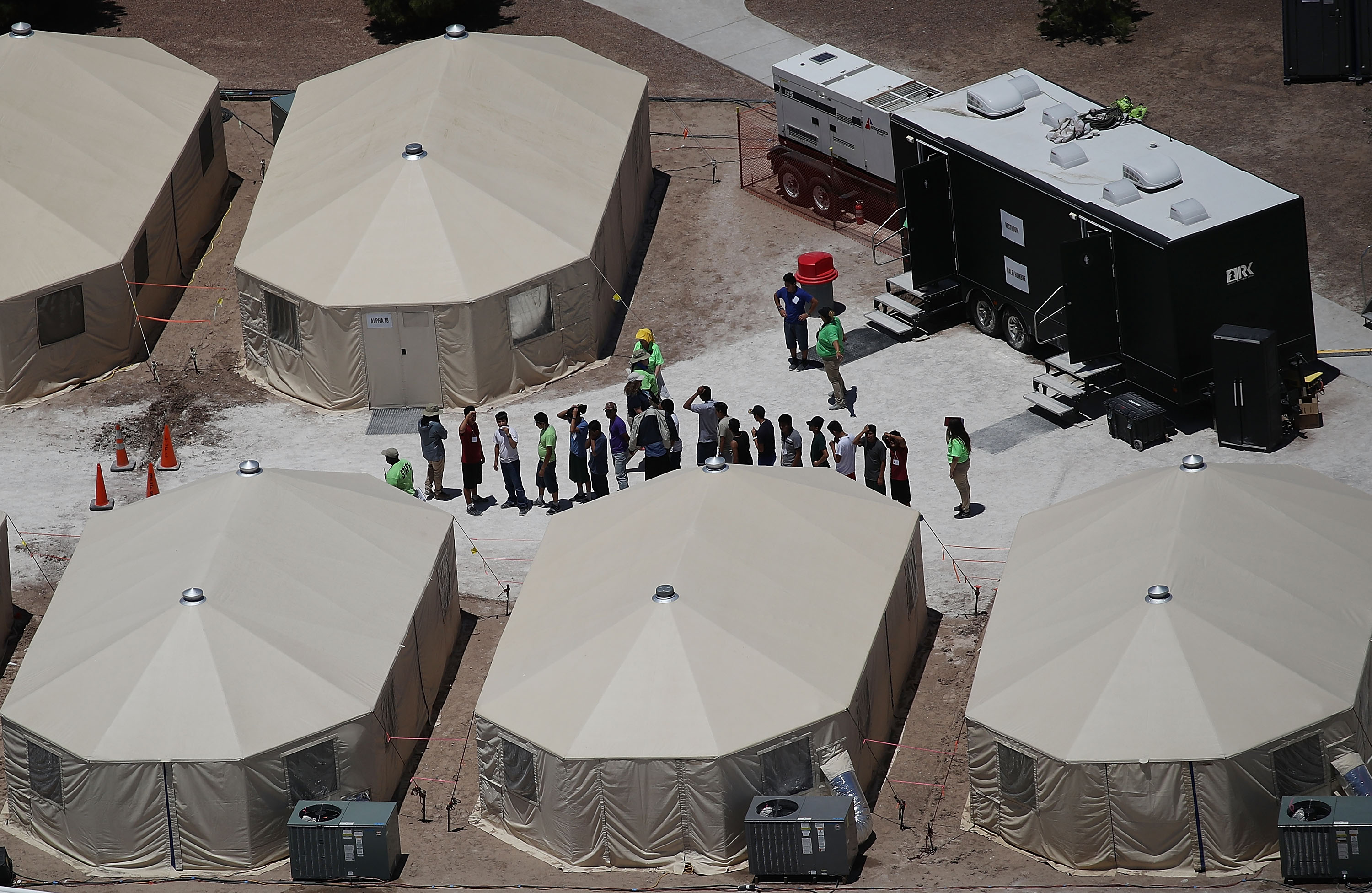 Children and workers are seen at a tent encampment recently built near the Tornillo Port of Entry on June 19, 2018 in Tornillo, Texas. The tent encampment shutdown earlier this month. (Photo by Joe Raedle/Getty Images)

EL PASO, TX — There was a collective sigh of relief among El Paso residents and immigrant advocates after the controversial temporary tent shelter in Tornillo, near the Texas border town, was shut down earlier this month.  The shelter was plagued with claims of inhumane treatment of children who were separated from their parents at the border or who journeyed to the United States alone from Central America. Meanwhile, community leaders are still working to push for long-lasting reform.

“The last child has left Tornillo. It’s good for these kids and their families. And it shows the power of people who showed up for them and shared with the rest of the country that we were locking up immigrant kids for months at a time,” former El Paso congressman Rep. Beto O’Rourke wrote on Twitter on January 11.

The last child has left Tornillo. It’s good for these kids and their families. And it shows the power of people who showed up for them and shared with the rest of the country that we were locking up immigrant kids for months at a time. You made this happen.

Since the facility’s shut down that day, the number of unaccompanied migrant children held in government-funded shelters has dropped according to the latest data from Texas Health and Human Services Commission and the U.S. Office of Refugee Resettlement.

There has been an overall decline of 34 percent, with January 16 data showing there are now 5,601 unaccompanied youth at the 34 remaining shelters in Texas. El Paso made national headlines as it scrambled to find shelter and food for migrants dropped off in the city by U.S. Immigration and Customs Enforcement in late 2018, with no federal funding and amidst the government shutdown.

In December, there were more than 2,700 children living in the Tornillo shelter, that was intended to house only 360 children when it opened in June. The shelter was a federal installation overseen by the U.S. Department of Health and Human Services but was regulated by a contractor instead of the state. More than 7,000 children stayed at the facility over the course of the year.

As news of the aftermath of separated families made international waves, President Donald Trump’s administration announced in late December it would loosen screening policies that immigrant rights groups claim are the culprit for a slowdown in placing migrant children with their relatives or other sponsors.

Specifically, the Trump administration said it would roll back its requirement that all residents in a sponsor’s household had to have fingerprinting and an extensive criminal background check. This move provided relief to older children and teenagers who travel alone, without proper documentation and are expecting an immigration judge to review their case.

But migrants are still being dropped off in El Paso. It’s something local leaders say has happened for the last 20 years and that the community is used to dealing with. The difference is the spike in immigrant children traveling alone over the last four years, as Central America becomes increasingly more corrupt and dangerous. Meanwhile, the El Paso community is ready to find them food, shelter and connect them with their families and sponsors throughout the United States. But local leaders say the help is intended to be temporary. The only lasting solution, they say, is immigration reform coupled with a hard look at U.S.-Central American relations.

Local leaders said the community, which includes a vast array of organizations, including nonprofit shelter Annunciation House, a coalition of churches and many volunteer residents, is united in its mission of advocating for immigration reform. Even El Pasoans who work as U.S. Customs and Border Protection agents struggle with current immigration policies.

“I know for a fact that there are many agents who really struggle with it and just want to be able to do their job, but who are deeply, deeply troubled by the Trump administration’s approach to immigration policy,” Rep. Veronica Escobar told Latino USA via phone call from Washington, DC. “There are also agents who are very frustrated because the agency has not adapted to the changes in migration that started four years ago. In many ways this is an agency that still tells its agents and provides equipment and support and training to its agents as though we are still dealing with single Mexican men coming across the Southern border instead of Central American families.”

The El Paso congresswoman said this disparity between law and what happens on the ground also extended to the federal government shutdown which ended January 25.

“All it does is create a national security crisis. Almost all of our CBP agents, TSA agents, Border Patrol agents, FBI agents, you name it, are having to report for duty and they’re not receiving a paycheck so the national security emergency that we’re facing is the fact that the Trump administration is refusing to pay the very people who work every day to secure our borders,” Escobar said.

Father Arturo Bañuelas, a longtime El Pasoan, Latino theologian and chair of the HOPE Border Institute, has documented the practice of separating children from their parents in El Paso long before it was made official policy by former Attorney General Jeff Sessions.  Bañuela refers to the caravan of migrants from Honduras that started on October 13 in the criminally dangerous city of San Pedro Sula and made its way to the U.S.-Mexico border as a “wave of hope,” and a true test of American values.

Stating that while few of the migrants may be so-called “rapists or thugs,” as Trump has referred to Latin American immigrants before, Bañuelas said the vast majority are hard-working, decent and honest people looking for a better life for their families and themselves.

Next month, Hope Border Institute and the Roman Catholic Diocese of El Paso are sponsoring a conference of border town leadership, extending from San Diego to Brownsville, to come up with an action plan to respond to the current immigration crisis (which he says is exaggerated by the president and the media), particularly in terms of Trump’s proposed border wall.

“We’ve got to deal with some kind of international solution for the causes of people coming here. Immigration reform is important because it’s going to help our country, but it’s not just about economic benefits to the country, it’s about human decency and human rights,” Bañuelas told Latino USA.