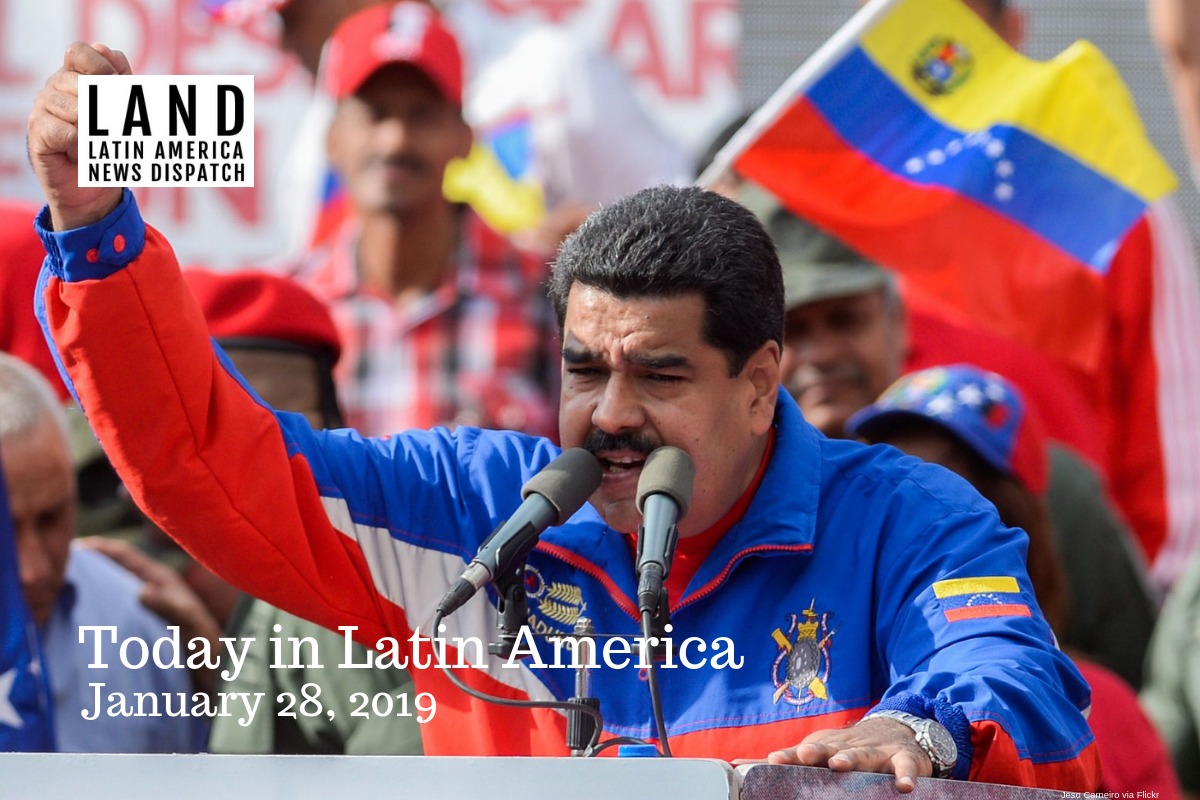 Nicolás Maduro is now allowing U.S. diplomats to stay in the country. (Photo by Jeso Carneiro/Flickr)

VENEZUELA: As the political crisis continued to unfold, on Saturday, the Maduro administration allowed for American diplomats to remain in Venezuela. President Nicolás Maduro backtracked on the demand originally issued on Wednesday when the United States and other countries recognized opposition leader Juan Guaidó as the interim president of Venezuela. According to a statement from the foreign ministry, Maduro plans on negotiating a “U.S. interests office” in Venezuela, similar to the diplomatic relationship between the United States and Cuba during the Cold War. The United Nations’ Security Council addressed the Venezuelan situation on Saturday, with Russia and China backing Maduro and Britain, France, Spain, and Germany threatening to recognize Guaidó if elections were not held in eight days.

On Sunday, Maduro stated on an interview with CNN that he will not be calling for early elections, alleging that Guaidó’s self-proclamation is “unconstitutional” and that is “breaking all laws.” Over the weekend, both President Maduro and Guaidó called for support from the armed forces. Although the Venezuelan military attaché in the United States is now recognizing the interim leader, the top brass of the Venezuelan military continues to pledge support for the Maduro administration.

CANADA/MEXICO: On Friday, a Canadian auto workers’ union at a General Motors plant in Ontario called on both Canadian and U.S. consumers to stop buying Mexican-made GM cars. The demand from Unifor union leaders in Oshawa, south of Toronto, came as the latest in a string of efforts to get the automaker to reconsider closing the GM plant, which could allegedly result in nearly 3,000 layoffs. The union maintained that it only wanted consumers to boycott the three GM models made in Mexico, estimated to generate $20 billion in revenue for the company. If successful, the boycott could keep the Oshawa plant open until December 2020.

MEXICO: This past Friday, the Mexican government contended with the Trump administration’s policy proposal requiring individuals to remain in Mexico while pursuing their asylum cases in the United States. The change in asylum policy would force the Mexican government to hold applicants for as much as a year before their claim reaches a judge in the United States. Mexican President Andrés Manuel López Obrador has eased visa applications for Central American migrants, proving to be a political counterpoint to the White House.

MEXICO: Commenting on the delicate situation in Venezuela, President Andrés Manuel López Obrador had initially stated on Thursday that Mexico would adopt a policy of non-intervention. However, over the weekend, AMLO recognized that Mexico could serve as a mediator in the political strife between President Nicolás Maduro and interim President Juan Guaidó. On Sunday, Guaidó stated that he expects that AMLO will “do the right thing” and collaborate in ending the “political and humanitarian crisis” in Venezuela.

CUBA: The first Roman Catholic church built since the 1959 socialist revolution was inaugurated Saturday in the town of Sandino, located in Cuba’s Western coast. The construction of the church, which seats 200 people, dragged on for four years. In efforts to strengthen bonds between the Vatican and its communist government, Cuba has allowed for the erection of two other churches elsewhere on the island. The Parish of the Sacred Heart of Jesus was built with the financial support from members of St. Lawrence Church in Tampa, Florida.

HONDURAS: On Sunday, thousands of Hondurans took the streets to protest the one-year anniversary of the controversial election of President Juan Orlando Hernández. Marchers in the rallies waved red and black flags to show support for former President Manuel Zelaya (2006-2009) and his left-wing Freedom and Refounding Party. The protests took place in 14 out of Honduras’ 18 departments. In response to the blockades and bonfires set by protesters, police responded with tear gas and violence.

PANAMA: The Vatican estimates that roughly 600,000 people attended Pope Francis’ Sunday Mass in Panama City on the last day of World Youth Day, including presidents from Colombia, El Salvador, Guatemala and Portugal, among others. Many pilgrims also camped out in tents the night before to participate in the pope’s evening vigil held at Metropark, in the country’s capital. In his closing mass at Santa Maria La Antigua Cathedral, he urged that priests and nuns in the Catholic faith find joy and inspiration in their practice despite the challenges — most notably sex abuse scandals—facing the Catholic Church today. The Pope also called for peace in Venezuela, although he has not announced if the Holy See will recognize the country’s new interim president, Juan Guiadó, as the leader of the embattled country.

PERU: On Sunday, 15 people were killed during a wedding celebration after a landslide made a hotel wall collapse in southeastern Peru. Reports state that following heavy rains, mud and rocks collapsed the walls in the Alhambra hotel in Abancay, near Cusco, as wedding guests were dancing inside. Local civil defense head Rusby Zela attributed tragedy to the previous five days of rain in the Andean city. The 29 people were saved from the rubble are currently recovering in a local hospital.

BRAZIL: Authorities reopened their search for survivors Sunday in response to the collapse of a dam holding mining waste near the southern city of Brumadinho, in the province of Minas Gerais. On Friday, the region was covered in mud and iron ore mining waste after the dam owned by the mining company Vale burst. Officials interrupted the search for half the day Sunday out of fear that a second dam would collapse in the area. Hundreds of people are still missing and hopes for finding anyone alive “are low,” according to rescue teams. Brazilian authorities have set the death toll at 58.