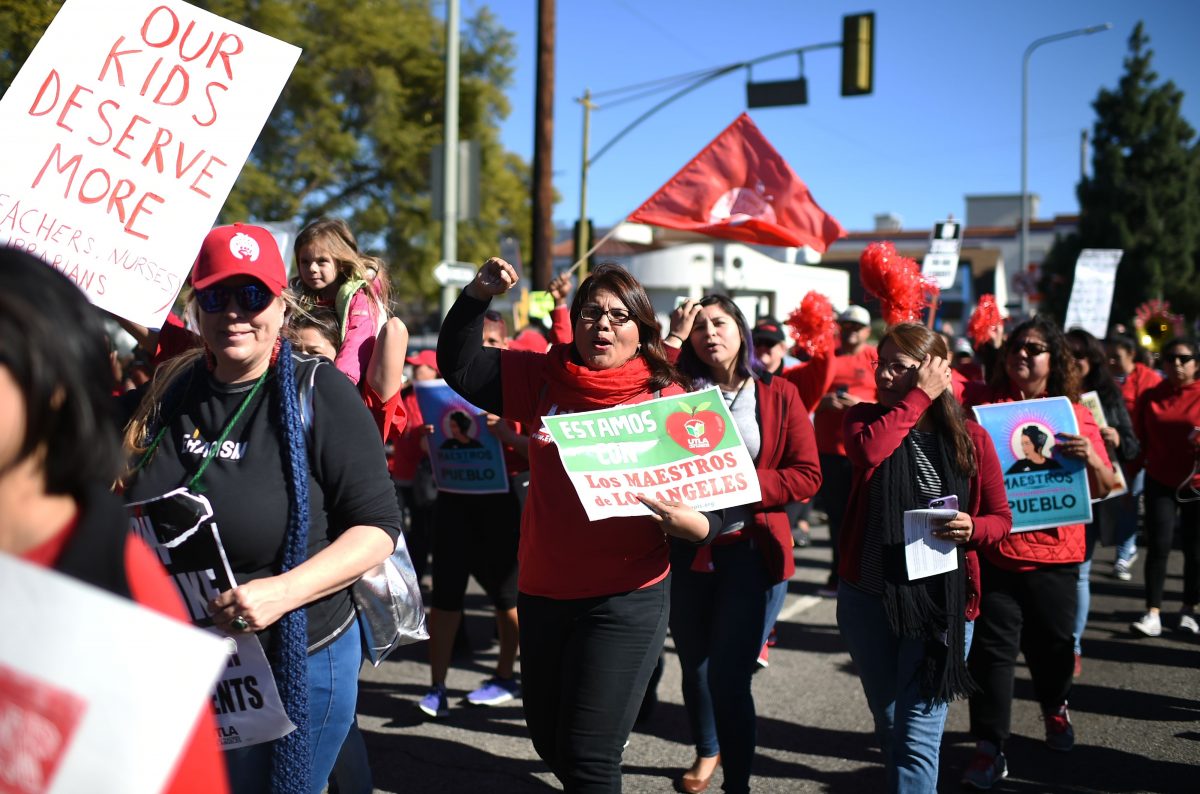 One of the most enduring images of the 2019 Los Angeles teachers strike will be of Roxana Dueñas.

Dueñas teaches history at Roosevelt High School in East Los Angeles. It was her image that was used on a strike poster that served as teachers’ call to arms: “Community Schools Build Democracy!”

In the end, this was a cry that did not go unheeded. The historic strike produced a tentative agreement to transform 30 LA schools in high need areas into community schools, investing US$400,000 in each one over two years.

But just what are “community schools”? And how did they figure into the Los Angeles teachers strike?

I come at this subject from a unique vantage point. For the past decade, my colleagues and I at the University of California, Los Angeles have joined forces with the district, teachers union and the community to establish the Robert F. Kennedy UCLA Community School in Koreatown and the Mann UCLA Community School in South LA. This collaboration is part of a larger national effort to establish community schools in partnership with universities. This is tied deeply to the democratic traditions of collective problem-solving and equal educational opportunity.

Not everyone agrees that community schools are the best solution to the problems that beset education. For instance, some critics claim that they are “racially and economically segregated.” And some research has found that they achieve “mixed results.” Overall, however, the evidence is promising. A thorough research review found that well-designed community schools are effective in meeting the educational needs of low-achieving students in high-poverty schools.

At its core, the strike, which concluded on January 22, was about who should control public education. The teachers’ union advocated putting control in the hands of local communities in order to curb the influence of pro-charter school education philanthropists. This was in part a reaction to an initiative by Eli Broad and others who proposed a plan to improve the Los Angeles Unified School District by attracting “edupreneurs” to launch 260 new charter schools that would capture 50 percent of the district’s “market share” by 2023. So far, charters are halfway to that goal, enrolling 25 percent of the district’s 621,414 students.

When Broad framed the future of public education in corporate terms —not democratic terms— it prompted widespread backlash.

Former school board president Jackie Goldberg declared, “This is war!” Local foundation leaders cautioned that intended reforms “often fall short if they are done to communities rather than with communities.”

Working with communities to improve schooling —and thereby democracy— is a central premise of the growing community schools movement. A century-old idea that originated with social reformers Jane Addams and John Dewey, community schools are neighborhood hubs that bring together families, educators, government agencies and community groups and organizations to provide all the opportunities and services young people need to thrive. The movement has experienced a renaissance of sorts, tied to the broader “new localism.”

For example, Oakland International School is a community school focused on the challenges facing its newcomer students. As a result, the school partners with 21 agencies to provide health and legal services, mentoring for students in eight languages, social workers and other supports. As a result, the college enrollment rate reached 68 percent by 2014, outperforming the state average for English learners.

When LA teachers negotiated for more nurses and counselors, they were pushing for a pillar of the community schools movement – providing health and social services. Cities such as New York have embraced community schools wholeheartedly, supporting 247 community schools in 2018. Early results are promising, including higher attendance and graduation rates. In June 2017, LA Unified passed a resolution to create a Community Schools Implementation Team charged with developing a rollout plan for an unspecified number of community schools. Three months later, the union released a bargaining proposal to the district requesting $10 million to support 20 high-need schools in becoming community schools. The agreement reached 16 months later through the strike increased the proposal to $12 million and 30 schools. Details of the implementation plan are forthcoming.

The funding problem is complex. It involves attracting and coordinating a diverse set of public and private investments. For example, school-based health clinics may rely on federal Medicaid funding, while after-school college tutoring may be privately funded. Ensuring private funds are used to strengthen the public system is a longstanding challenge.

LeBron James recently invested an initial $2 million to open a community school in Akron. He told ESPN, “It’s not a charter school, it’s not a private school, it’s a real-life school in my hometown.” Widely lauded, this investment may be signaling an increased willingness to invest private dollars within neighborhood public schools given the controversy surrounding charter schools that surfaced in the strike.

Local Los Angeles philanthropists Melanie and Richard Lundquist are investing $85 million over 20 years in 18 historically underserved schools, including Roosevelt High School where Roxanna teaches. This adds about $650 per student per year. Though impressive, it makes only a dent in the amount needed to adequately fund public education.

To put that into perspective, Policy Analysis for California Education estimates that it would take a 38 percent increase in the current $12,204 spent per pupil to meet the goals set by the State Board of Education. That’s an estimated $4,686 more per student—which explains why the teachers were fighting for increased public school funding.

The striking teachers were also fighting to correct the imbalance of resources across charter and non-charter schools. One teacher who writes a popular blog explained that he was striking because competing with charters wasn’t a fair game given their lower class sizes. A teacher from a charter school reflected on how the strike has made her consider how charter school expansion is harming the city.

While there are many excellent charter schools in Los Angeles Unified, as a group they serve fewer students living in poverty 72 percent in charters versus 86 percent in non-charter schools. When families compete for seats in an educational marketplace, often the students facing the most challenges are left behind because they are too expensive or considered disruptive.

The Mann UCLA Community School opened in 2017, building on the foundation of the historic Horace Mann Middle School. In 2000, Mann enrolled 1,737 students. By 2016, enrollment had plummeted to 330 students. Meanwhile, 37 charter schools had opened within a 2.5-mile radius of the school.

The students still enrolled at Mann are promising, resilient young people, but they face more challenges than those who left for charter schools. For example, 29 percent of the students at Mann are enrolled in special education, versus 11 percent in charters. New community school resources like summer programs, a college center and Saturday school are slowly attracting local families back to their neighborhood school. By September 2018, 444 students were enrolled and the percentage of students with 96 percent or higher attendance had improved 9 percent, from 59 percent to 68 percent, according to Los Angeles Unified School District data. This is still below the district average but a promising sign of improvement.

As more families choose the Mann UCLA Community School, they are not just exercising the individual freedom Americans so deeply value. They are joining a community. As John Dewey put it in 1927, “Democracy must begin at home, and its home is the neighborly community.”