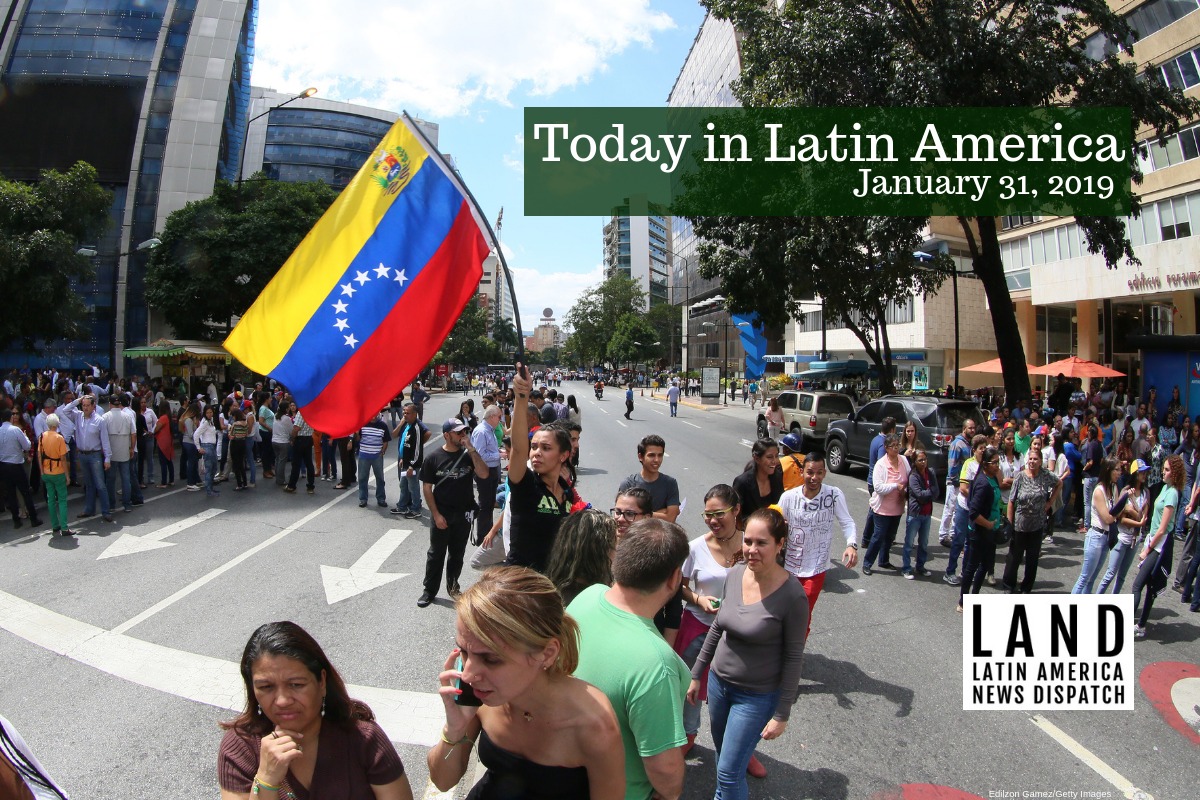 A woman waves a flag during a demonstration against the government of President Nicolás Maduro called by the opposition leader self-proclaimed “acting president” Juan Guaido on January 30, 2019 in Caracas, Venezuela. (Photo by Edilzon Gamez/Getty Images)

VENEZUELA: Venezuelans organized a walkout yesterday, protesting President Nicolás Maduro’s presidency and following opposition leader Juan Guaidó’s call for demonstrations. On the same day, Maduro announced that he would be willing to negotiate with Guaidó’s opposition and suggested that another country such as Mexico, Uruguay, Bolivia, Russia or the Vatican mediate.

During a press conference yesterday, the leaders of Mexico and Spain acknowledged their willingness to mediate negotiations for Venezuela, but also highlighted varying policies towards Maduro and Guaidó. While Mexican President Andrés Manuel López Obrador (AMLO) emphasized Mexico’s non-intervention policy, Spanish Prime Minister Pedro Sánchez stated that Spain will recognize Guaidó as Venezuela’s president if new elections are not announced within eight days.

Also yesterday, Guaidó published an Op-Ed in the New York Times denouncing the May 20, 2018, elections as illegitimate and encouraging Venezuelans to unite in protest of Maduro’s administration.

UNITED STATES: In response to claims of employing undocumented immigrants, the Trump Organization stated yesterday that it will now use the E-verify electronic system to authenticate employees’ documentation. This news comes after a dozen immigrant employees were fired at the Trump National Golf Club in Westchester County, New York, on Jan. 18. Attorney Anibal Romero said many of the fired employees had been working at Trump resorts for over 10 years and were only fired after workers at a Trump resort in Bedminster, New Jersey, golf club came forward to explain managers had hired them knowing their legal status.

UNITED STATES: The Venezuelan diplomatic delegation to the U.S. assigned by Juan Guaidó, Venezuela’s opposition leader whom President Donald Trump has recognized as Venezuela’s legitimate president, is currently working in Washington, D.C. without official headquarters. Although diplomatic representatives told El País that Caracas and Bogotá were collaborating, Guaidó’s team has stated it has no intention of joining the Colombian Embassy. Guaidó has appointed Carlos Vecchio as Business Correspondent and Gustavo Tarre as representative of the Organization of American States (OAS).

MEXICO: As Joaquín “El Chapo” Guzmán Loera’s trial nears an end, it appears that the Mexican drug lord may face life imprisonment. Yesterday, the closing arguments were incredibly damaging to Guzmán’s case. Over 10 weeks, 56 witnesses have portrayed Guzmán as a bloodthirsty killer and a ruthless drug lord who evaded capture and escaped prison to avoid facing justice on U.S. soil.

PUERTO RICO: At a hearing yesterday, attorneys representing bondholders asked for more time to fight a federal debt restructuring proposal. They are demanding that $6 billion of Puerto Rico’s $70 billion debt be dismissed, which includes all obligation funds issued between 2012 and 2014. The hearing has been ongoing since last week and the judge has yet to rule on this issue. Another hearing on debt restructuring is expected in mid-March.

REGION: Former U.S. President Bill Clinton announced several recovery projects in nations damaged by hurricanes across the Caribbean, including Puerto Rico, Antigua and Barbuda, Dominica and the U.S. Virgin Islands. President Clinton made the announcement yesterday in San Juan, Puerto Rico, where the Clinton Global Initiative hosted 550 people representing 400 organizations. Some of the projects will include developing hurricane-resistant, solar-powered libraries and improving technology to prepare for natural disasters across the Caribbean.

PANAMA: The 2019 Caribbean World Series (CWS) will be held in Panama, following security concerns in the original host country, Venezuela. Between Feb. 4-10, the Rod Carew Stadium in Panama City will host six teams from Cuba, Mexico, Puerto Rico, the Dominican Republic and Venezuela. This is the second year that the CWS are moved out of Venezuela amid fear of political unrest in the South American country.