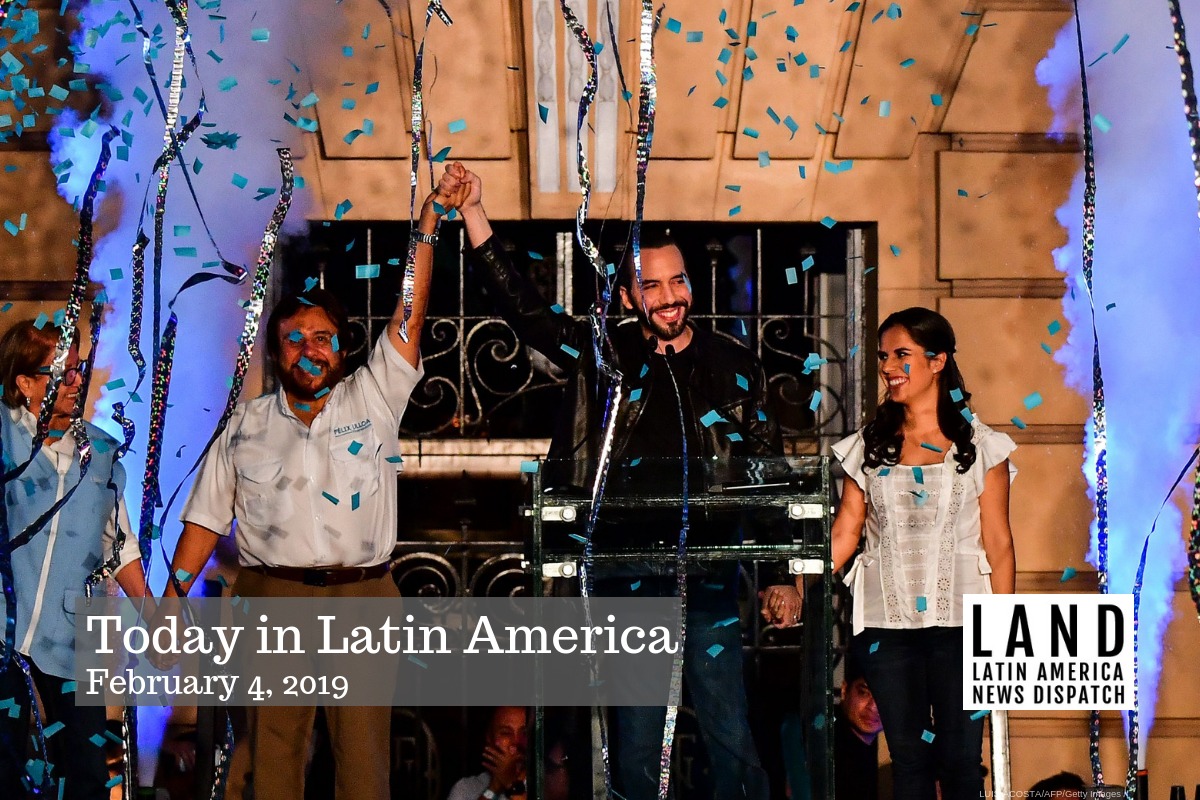 EL SALVADOR: Latin America’s electoral calendar began yesterday in El Salvador. With over 90 percent of the votes tallied at midnight, a political outsider registered a resounding first-round victory that ended decades of two-party rule in the country. Nayib Bukele was elected with 54 percent of the votes, over 20 points ahead of Carlos Callejas of the right-wing Nationalist Republican Alliance (ARENA). Former Foreign Minister Hugo Martinez, running with the incumbent left-wing Farabundo Marti Liberation Front(FMLN) party, accrued less than 14 percent of the votes.

Bukele, 37, rose through the ranks of the FMLN as the Mayor of Nuevo Cuscatlán (2012-2014) and San Salvador (2015-2018), beating opponents from ARENA on both occasions. However, following a series of clashes with the FMLN leadership, Bukele was expelled from the organization. Bukele finally became the candidate for the Great National Alliance (GANA) in July 2018, a self-described center-right party.

Bukele ran a campaign on an anti-graft platform. The three Salvadoran presidents preceding the incumbent Salvador Sánchez Cerén (FMLN) had been involved in high-profile corruption scandals. Bukele promised to develop El Salvador’s own iteration of an international judicial body to combat systemic corruption, similar to CICIG in Guatemala and MACCIH in Honduras.

UNITED STATES: President Donald Trump said military intervention in Venezuela is “an option” in a CBS interview Sunday. The comments came as the Trump administration and other foreign governments came out against current Venezuelan president Nicolás Maduro. On Friday, U.S. National Security Adviser John Bolton tweeted that the U.S. would provide humanitarian aid to Venezuela.

Answering the call of President Guaido, the U.S. is mobilizing & transporting humanitarian aid for the people of #Venezuela. I applaud the hard work of USAID, the State Department and their partners in preparing critical supplies to move forward this weekend. https://t.co/JR9poraxWl

Maduro has declined to accept any international aid and the Red Cross warned the United States of the potential dangers of attempting to send humanitarian aid to the region without approval from security forces aligned with Maduro.

UNITED STATES: Mexico reported its highest recorded trade surplus in December despite President Donald Trump’s efforts to stunt the flow of Mexican goods into the United States by revising the North American Free Trade Agreement (NAFTA). According to Bloomberg, Mexico exports most of its goods to the United States. Despite the creation of a new trade deal, Mexico’s exports surplus rose to $1.8 billion and oil imports fell 15.5 percent. Automotive exports rose over 7 percent despite protests and proposed vehicle boycotts on Mexican-made vehicles by GM auto workers in Canada.

MEXICO: New details emerged in the case against Mexican drug lord Joaquín “El Chapo” Guzmán Friday. Documents show that witnesses say Guzmán had sex with minors and referred to them as “vitamins.” The news broke just a few days before the jury was set to begin deliberations. Guzmán’s defense team may move for a mistrial.

CUBA: A meteorite struck western Cuba Friday, hitting the town of Viñales, where two strong explosions were heard. The meteorite’s trajectory, captured on satellite, is said to have traveled from West Palm Beach in Florida, to Key West, finally landing in the Cuban province of Pinar del Río, in the west part of the island. Following the natural phenomenon, scientists at Cuba’s Institute of Geophysics and Astronomy headed to the area to take samples of the residue consisting of small black rocks with inner red veins. No damage or injuries were reported.

JAMAICA: Roughly 50 Caribbean-born citizens who have lived in the United Kingdom for many years are being deported back to Jamaica on a charter plane. The last charter flights to Jamaica were planned for March 2017 and April 2018, shortly after the Windrush scandal was uncovered, but the latter was canceled. All of the people being removed have served time for crimes in the United Kingdom, and some are arguing that their deportation is “brutal double punishment” for the Jamaican diaspora community in Britain.

PANAMA: Panama is expelling 60 Iranian vessels, mostly tankers, from its Ship Registry in order to avoid being sanctioned by the U.S. Treasury. Since 2016, the United States has raised concerns about the vessels and their role in terrorism. Panama’s ship registry is the biggest in the world, with more than 8,000 vessels.

VENEZUELA: On Saturday, as protests again erupted, President Nicolás Maduro proposed an early parliamentary vote in response to calls from the head of the National Assembly Juan Guaidó and the international community to bring early presidential elections. The vote has the potential to remove Guaidó, who declared himself the interim president on January 23. On the same day, the first high-ranking military officer, the general of the Venezuelan air force, pledged support for Guiadó. The opposition leader encouraged more members of the military to defect and said that the armed forces needed to “get on the side of the Venezuelan people.”

COLOMBIA: During an operation carried out on Saturday, the Colombian military killed one of the leaders of a breakaway faction of the Revolutionary Armed Forces of Colombia(FARC). Edgar Mesías Salgado Aragón, known as “Rodrigo Cadete,” was killed in Caquetá in southern Colombia, President Iván Duque said on a press conference in Manizales, located in western Colombia. Defence Minister Guillermo Botero stated that Cadete, second in command among the dissidents, was attempting to unify the 1,700 FARC rebels who have not given up their weapons. Ten other dissidents were killed in the operation.

BRAZIL: On Saturday, the Brazilian Senate chose a relatively unknown legislator, ally of president Jair Bolsonaro, as the chamber’s new president. Devi Alcolumbre, a pro-business legislator from the DEM party, won the position by one vote against four-time senate president Renan Calheiros. Alcolumbre is a native of the Amapá region in northern Brazil and will become the country first Jewish president of the Senate. However, Bolsonaro still remains without a working majority in Congress, deterring him from enacting reforms in pensions and budget deficits.