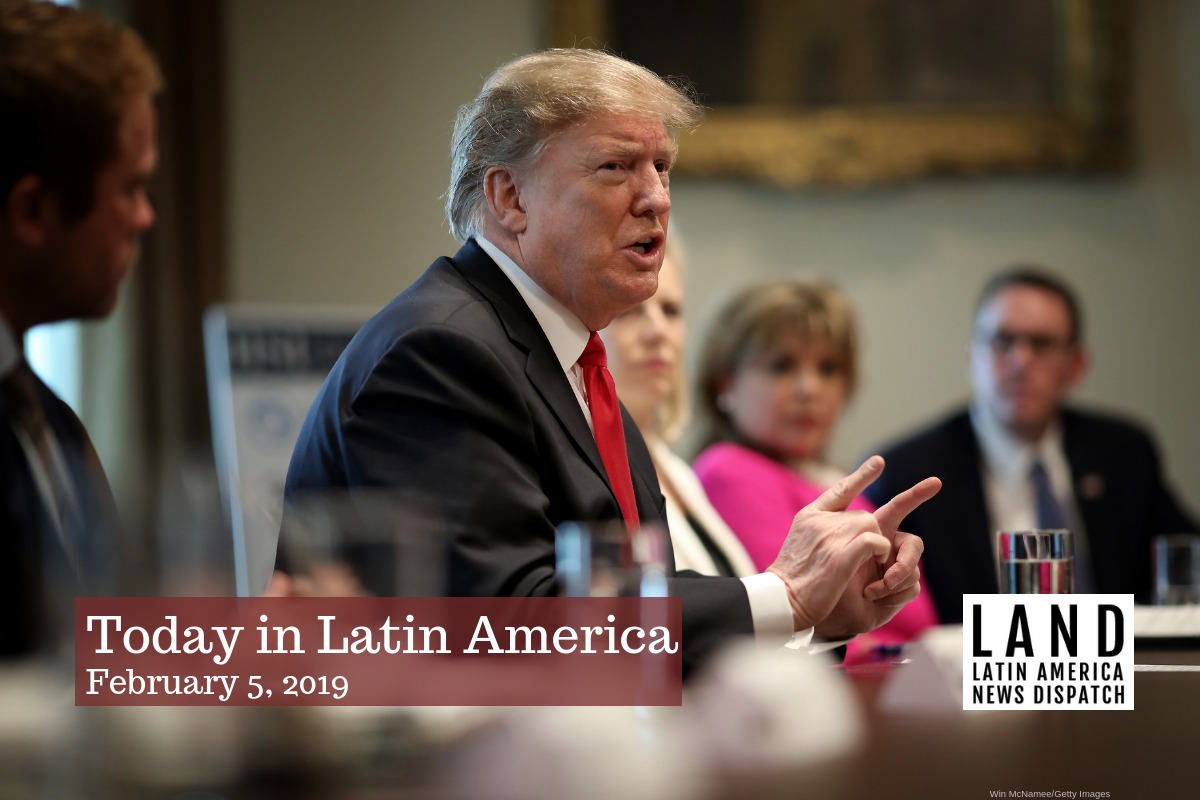 VENEZUELA: In an interview with CBS that aired on Sunday, President Donald Trump stated that a military intervention in Venezuela remains an option. The United States, Canada, and several Latin American countries, including Brazil and Argentina, have recognized Juan Guaidó as the country’s president. However, this Monday in Ottawa, Canada, the “Lima Group” —a multilateral body of 14 countries, excluding the United States— affirmed their support to Guaidó but rejected any form of violence or military intervention.

Meanwhile, Venezuelan President Nicolás Maduro ignored the European Union’s request for new elections, which had set a deadline for Sunday night. In an interview with Spanish televisión channel La Sexta that aired on Sunday, Maduro said, “I refuse to call for elections now—there will be elections in 2024. We don’t care what Europe says.”

MEXICO: Mexico will allocate $20 million towards an investigation into thousands of missing Mexican citizens and migrants, focusing on the staggering amount of unidentified bodies and secret gravesites across the country. Alejandro Encinas, Mexico’s sub-secretary for human rights, told reporters that Mexico was “an enormous clandestine grave” and that the previous administration did not do enough to address the issue. Smaller scale initiatives were announced at the beginning of President Andrés Manuel López Obrador’s term, including a truth commission into the kidnapping of 43 Mexican students. At that time, Encinas called the decree “the first step of many steps we will take in the process of reconciliation in the country.”

MEXICO: Eight people were killed at a harvest ceremony in the community of Plan de Ayala, Guerrero, yesterday, possibly as a result of a water dispute. According to witnesses, 20 to 30 people were participating in a ceremony to bring rain and good harvests when men arrived and began shooting into the crowd. State security spokesman Roberto Álvarez said the conflict may be related to a dispute over a nearby spring and the water it supplies to recently discovered opium fields.

UNITED STATES: The Pentagon will deploy 3,750 more troops to the United States-Mexico border in order to continue construction of wire barriers and provide mobile surveillance, Acting Defense Secretary Pat Shanahan said on Sunday. Troops tasked with mobile surveillance will remain on the border until at least Sept. 30. The decision follows two extensions of the original troop deployment, which was set to end Dec. 15. This new deployment brings the total number of U.S. active-duty troops on the border to 4,350.

BAHAMAS/HAITI: Twenty-eight Haitians died as a boat capsized and sunk near the Bahamian coast. The Royal Bahamian Defence Force rescued 17 survivors off the coast of the Abaco Islands in the northern Bahamas.  The U.S. Embassy in Port-au-Prince issued a statement via Twitter, labeling the maritime voyage as a “vessel trafficking people out of Haiti.”

Another tragic loss of life, as 17 Haitians drown and 30 more just rescued from a vessel trafficking people out of Haiti. No journey is worth risking lives – please urge families and communities: Illegal migrant & smuggling operations are dangerous and frequently end in tragedy. pic.twitter.com/3DHH29z976

The BBC reports that over 300 Haitians have been caught trying to enter the Bahamas.

PUERTO RICO: Yesterday, a federal judge approved a debt-restructuring plan backed by a sales tax that would save Puerto Rico an average of $456 million per year. The Puerto Rico Sales Taxing Corporation, known as COFINA for its Spanish acronym, aims to cut sales of tax-backed debt by $17.5 billion over the next four decades. Created as an oversight board following Puerto Rico’s filing for bankruptcy, COFINA will split sales tax revenue, with 53 percent for bondholders and 46 percent for the Puerto Rican government.

COSTA RICA: The government is set to promote a bill that attempts to reduce contamination caused by plastic residues. The legislative initiative, presented by Congresswoman Paola Vega, states that 90 percent of the 600 million disposable plastic containers are not adequately recycled or reused. If passed, a ban on single-use plastic and Styrofoam would be enacted in Costa Rica. The country has already been regulating its use of plastic products in public institutions since June 2018.

BRAZIL: So far this year, four women have been killed every day in Brazil. The Inter-American Commission on Human Rights (IACHR), a human rights arm of the Organization of American States, called this finding “alarming” in a statement yesterday, asserting that more must be done to prevent femicides in Brazil. The South American country, along with 15 other American countries, has introduced laws against femicide that can carry sentences of up to 30 years in jail.

BRAZIL: Today, Justice Minister Sergio Moro presented an anti-crime bill that will toughen Brazil’s approach to organized crime, corruption and violence. The key measures of this initiative include obligating convicts to start serving their sentence after the first appeal is denied, categorizing militias and drug trafficking gangs as organized criminal groups and scrutinizing illegal campaign finance. “We want to be more rigorous with more serious crimes,” said Moro.