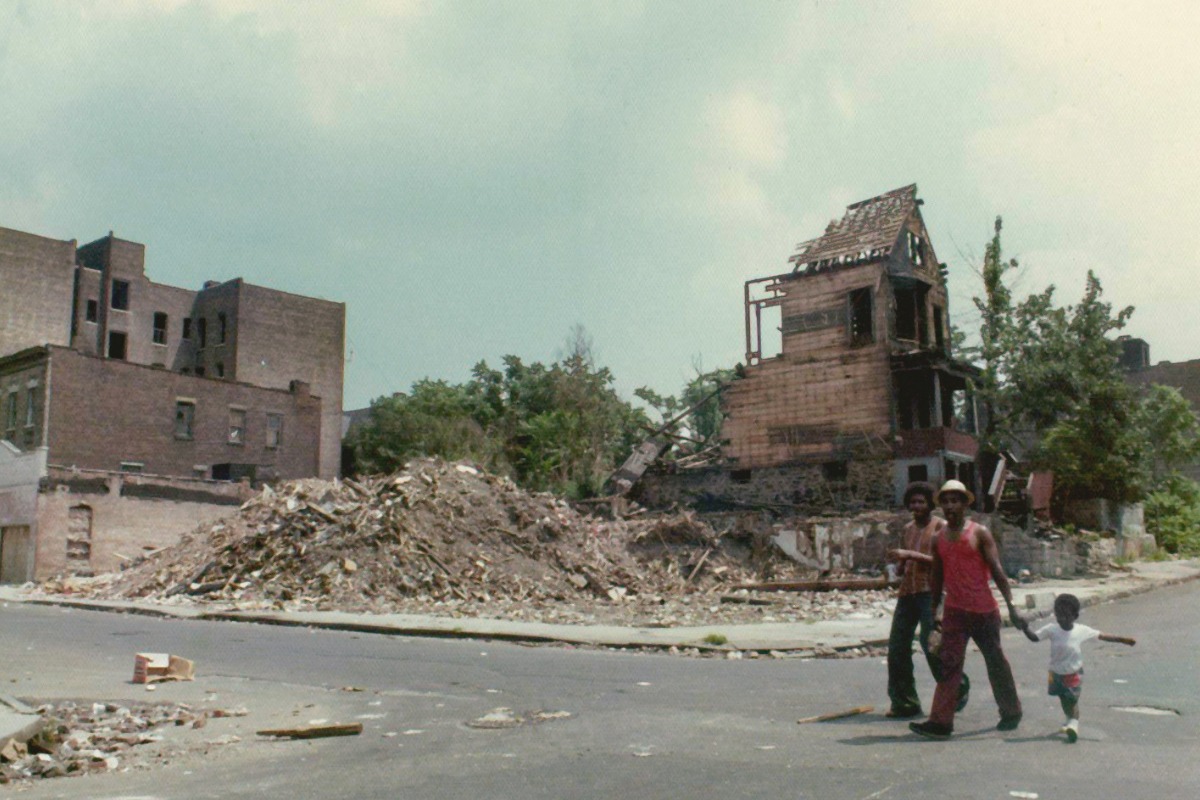 Archival image of the South Bronx. (Courtesy of Marlea Willis/Decafe of Fire)

Co-directed by Bronx-native Vivian Vazquez, “Decade of Fire” is a deep dive into the historical context of the fires that plagued the South Bronx in the ’70s. Part personal essay, part exposé, the film takes us on a journey, and we realize that what we know —or thought we knew— of the fires isn’t the full picture.

“Many of us thought ‘we did it ourselves,’ thought that we were responsible, that we didn’t deserve good housing. We internalized blame,” Vazquez said in an interview with Latino USA. “So what ‘Decade of Fire’ does after so many years is that it turns that narrative on its head and it changes the story.”

Tracing the origin of the fires, the documentary transports us back to the 1930s. Following the Great Depression, the Home Owners’ Loan Corporation began to assess mortgage-lending risk in many American cities. Neighborhoods with “a Black or Puerto Rican population that was within the five to ten percent margin” weren’t considered desirable and were assigned less favorable mortgage rates. Rating the desirability of a neighborhood, per white families standards, became known as redlining. During the early urban renewal period, or “slum clearance,” many people of color were displaced out of Manhattan to the outer boroughs, especially to the South Bronx. Borrowing a page from the playbook of insurance companies by denying mortgages, banks didn’t deem people of color eligible for loans—and all based on race.

“We didn’t burn the Bronx, the Bronx was burned… it was devastated by racist and unjust policies,” Vazquez said.

With a concept that began in 2002, the documentary itself took over a decade to complete. For the team behind the documentary, which includes Gretchen Hildebran as director and producer, and Julia Steele Allen and Neyda Martinez also as producers, the journey began with a simple query, “Why did the Bronx burn?”

That query then became a search for the truth.

“We started out talking about it, reading about it, doing research about the South Bronx fires, and then we began actually collecting stories from my friends, and peers, from my own neighborhood, so we went back to the block,” Vazquez said.

For Vazquez, who grew up there in the era when it was being ravaged by fires, the topic is personal.

“It tells the story from the perspective of a kid who grew up in the South Bronx, that kid being me,” she explained.

The documentary then shows how in the mid-’70s, South Bronx landlords sold buildings to speculators because they didn’t want to remain in a “declining” neighborhood. Speculators only collected money from the tenants and ignored any petition to improve the buildings’ conditions. At that time, New York City was undergoing a severe economic crisis—so bad that they were close to filing for bankruptcy. With federal aid, the city was able to escape total crisis, but steep, widespread cuts were in order throughout, disproportionately affecting communities of color the most.

DECADE OF FIRE 4-min trailer from Gretchen Hildebran on Vimeo.

A key policy that impacted displacement victims centered on the misuse of technology. Joe Flood, author of The Fires, chronicles how New York’s use of mathematical models developed by RAND (a military think tank ironically describing itself as “concerned with effective use of fire department manpower and equipment and, particularly, with deployment and allocation of firefighting units”) led the city to end fire protection in underprivileged neighborhoods with large Black and Latino populations. The closures of fire companies meant less firefighters on call and vulnerable neighborhoods alone at their own peril. An estimated 600,000 homes were destroyed by fires, but the total number is still unknown since records lacked consistent upkeep. That was just another way that the significance of the issue and its people were erased.

If it seems hard to process the reckless malpractice, it was, and for those at the center of it, it was more than devastating. The documentary focuses on the voices of the community, depicting heart-wrenching interviews, footage of the most affected, turning the myths of the time into concrete stories with numbers, and faces.

“I grew up with fires. It wasn’t until I became older that I began realizing what happened to us and why,” said Vazquez, who is the daughter of Puerto Rican parents. “Many of us saw it as normal.”

These hard facts are handed to us by the Vazquez herself. Throughout the documentary, she is in front of the camera, goes to fire departments and looks into their records, and realizes the immensity of the tragic fires. Vasquez acknowledges that like many of her peers, she was too young to understand the full picture of what transpired in her neighborhood. For her, and the viewer, it is only now that it has hit her. A feeling of impotence and anger overwhelms her. Tears roll down her face.

Vazquez said that being vulnerable was particularly difficult for her.

With the aid of found and archival footage, the documentary shows government officials visiting, both local and federal, only to dish out empty promises, failing to revitalize the South Bronx.

Fighting back against government incompetence and negligence, community organizers and grassroots organizations, like the People’s Development Corporation, called to action many of the people affected by the fires and started the rebuilding process themselves. With carpentry and construction training, many were able to go back into the homes and rebuild what they had lost.

As the documentary argues, the painful fact is that the fires didn’t have to happen. They weren’t an accident. Young people were paid small sums to start fires. While not much money, participants still received small sums (from whom?), which was more than the government ever offered. But a new perspective this film offers is that Vasquez doesn’t vilify the youth who partook in the fires. It’s the system they were in that not only ignored and neglected them, but also used and exploited them against their own interests.

The documentary also shows Vazquez speaking to her son on camera. She recounts her childhood: how she’d hear salsa music as she was walking back home, the hollering of Latino and Black kids playing in the streets, how sad it was for her to move out once the neighborhood didn’t seem to be going back to its glory (the decision not hers to make but her parents’).

For the filmmakers, one of the challenges was fundraising. They began with a Kickstarter campaign, and once the money from that ran out, raising more funds became a hurdle. Eventually, they realized that to garner interest for the documentary, they could connect with the community and show that current issues affecting the South Bronx are intrinsically tied to the era reflected in the film.

Over the next few weeks, the team is working to bring the documentary to predominantly Black and Brown communities who might resonate with the film, with a showing on February 13 at MNN El Barrio Firehouse Community Media Center in Harlem, as well as on February 21 at the Banana Kelly organization in the Southeast Bronx.