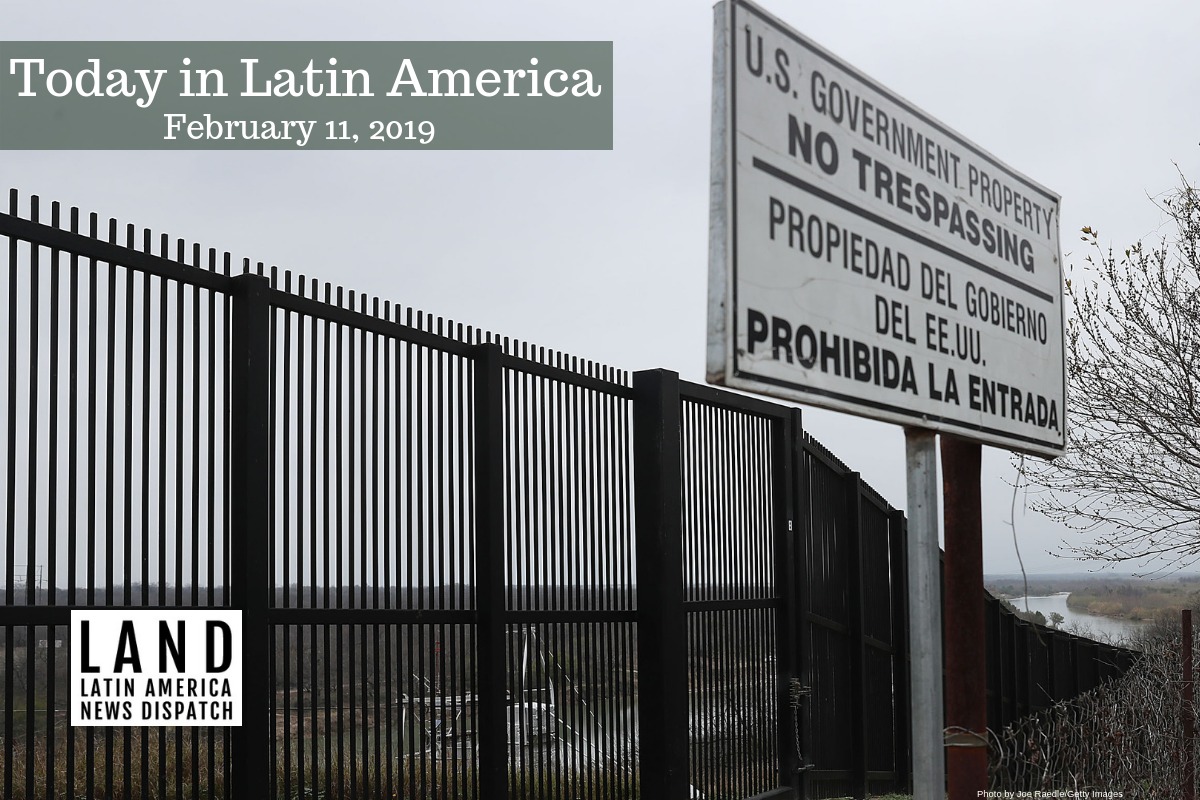 A border fence is seen near the Rio Grande which marks the boundary between Mexico and the United States on February 9, 2019 in Eagle Pass, Texas. (Photo by Joe Raedle/Getty Images)

UNITED STATES / MEXICO: U.S. Border Patrol said its agents rescued five migrants as they tried to cross illegally into the United States via the Rio Grande. The migrants were reportedly Honduran nationals and included a 1-year-old and a 3-year old. The U.S. military deployed 250 troops to the city of Eagle Pass, Texas, to prevent migrant caravan members staying in the Mexican town of Piedras Negras from entering the United States.

The United States enters a decisive week regarding border security. Bipartisan negotiations might not yield enough funding for President Donald Trump’s physical barrier. If an agreement is not reached at the end week, the United States could potentially enter its second federal government shutdown of the year. Experts note that Trump could also declare a “national emergency” to secure the necessary $5.7 billion for a border wall.

MEXICO: A federation of Mexican teachers will continue blocking railroad tracks in the western state of Michoacán until late payments are issued. In January, the National Coordinator of Education Workers (CNTE) set up protest camps on the railways. The teachers received their pay and freed some of the rail lines last week, but re-erected the barricades again on Friday. Mexican President Andrés Manuel López Obrador has reportedly asked the Mexican National Human Rights Commission (CNDH) to recommend measures for ending the standoff that lasted 25 days.

MEXICO: A Mexican journalist was gunned down Saturday in the Gulf state of Tabasco, the state attorney general’s office reports. Radio show host Jesus “Chuchín” Ramos, 59, was eating breakfast at a restaurant when he was shot multiple times. Ramos is the second journalist in Mexico who has been killed in the first quarter of 2019. Mexico is ranked seventh by the Committee to Protect Journalists’ impunity index.

HAITI: Two demonstrators were killed and 14 officers injured in the third consecutive day of protests against Haitian President Jovenel Moïse. Thousands gathered in Port-au-Prince and demanded that Moïse step down as they toppled over barricades and stoned his residence in the Pétionville neighborhood of the capital. Calling him corrupt, the protestors accused Moïse of destroying the national economy and condemned his failure to punish Venezuela for fraud when they sent Haiti discounted oil.

TRINIDAD AND TOBAGO: According to a new report by the Trinidad and To­ba­go Po­lice Ser­vice (TTPS), the threat of gang violence is growing with a record of 2,468 gang members and over 2,000 gang-related murders since last year. From 2006 to 2016, the number of gangs increased from 95 to 172, like the infamous “Ras­ta City” and “Mus­lim” gangs. Unlike other Latin American gangs, Trinidad and Tobago gangs are generally small and insular. The Anti-Gang Act established in 2018 emphasizes the necessity to suppress gang activity to improve public safety in Trinidad and Tobago. So far, 62 murders have been recorded in the twin-island nation in 2019.

COSTA RICA: On Friday, a fourth woman accused the country’s former President Óscar Arias Sánchez, 78, of sexual assault. Former Miss Costa Rica Yazmín Morales recalled that in 2015, the Nobel Peace Prize laureate forced himself on her at his San José residence after connecting with her through social media. Three other women also accused him of sexual assault, leading hundreds of women to protest at the capitol Friday. Arias, who has denied all allegations, is expected to leave the National Liberation Party pending the results of the first case.

VENEZUELA: Yesterday, dozens of doctors protested President Nicolás Maduro’s decision to block humanitarian aid. The physicians held the demonstration on the Colombian side of the Tienditas International Bridge, near the city of Cúcuta, out of concern for state retaliation. Maduro refused entry for an aid package sent by the United States to relieve the nation’s years-long humanitarian crisis on Friday, calling it a “rotten gift.” Conversely, self-declared president Juan Guaidó warned the Venezuelan military blocking the bridge that those actions can be considered “crimes against humanity.”

COLOMBIA: Hippos left over by Pablo Escobar are upturning the fragile ecosystem of the Magdalena River, near the city of Medellín. During his murderous reign in 1980’s, Escobar had hippos imported to Villa Nápoles, his private estate. When the Colombian government seized the property after the cocaine smuggler’s death, they allowed the hippos to remain on the estate. The mammals have thrived in an environment without natural predators and now locals struggle to cohabitate with them. The Colombian Environmental Agency (CONARE) estimates that live in the estate’s vicinity.

BRAZIL: On Friday, a fire in a dormitory at the academy of the Flamengo soccer club killed 10 and injured three teenage players. The vice governor of the state of Rio de Janeiro, Claudio Castro, said authorities are conducting an investigation on the cause of the fire, which remains unknown. In a statement, officials said that the academy residence was registered with the city as a parking lot rather than as a dormitory. Yesterday, hundreds of mourners attended the funeral of Christian Esmerio Candido, 15, a rising star in the Flamengo youth team who died in the fire.

CHILE: Six people died in one of the driest deserts in the world in northern Chile after Andean rains flooded the region. The torrential rain in the Atacama desert swept away homes and damaged roads, prompting President Sebastián Piñera to declare the area a “zone of emergency” on Friday. Nearly 1,500 houses have been damaged in El Loa, Antofagasta region, according to the National Emergency Office. Chile is one of the globe’s top producers of copper, and several mining companies, including state-owned Codelco, halted operations last week due to the storms.