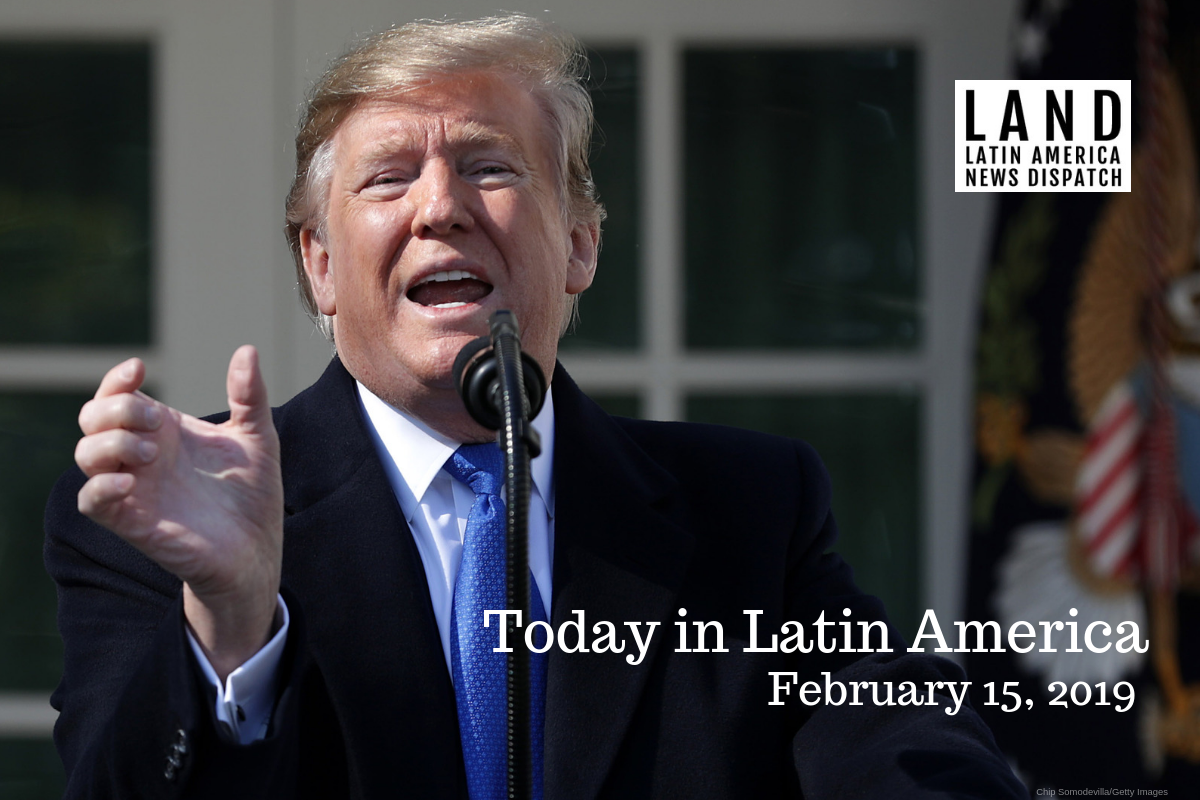 UNITED STATES: President Donald Trump declared a national emergency to fund his border wall with Mexico. The announcement arrived after the U.S. Senate passed a border security plan yesterday to avert a government shutdown. The bipartisan plan would provide funding for 55 miles of fencing along the southern border, which is only a fraction of the president’s campaign promise.

BORDER: The ACLU and other groups filed a lawsuit against the Trump administration yesterday, requesting the judge strike down a recent policy that requires asylum seekers to remain in Mexico while their case is reviewed. Filed in San Francisco, the lawsuit refers to the program commonly known as “Remain in Mexico,” which was announced by the Department of Homeland Security in December. According to U.S. and international law, asylum seekers entering the country at ports of entry or illegally are allowed to stay in the United States while their case is processed after passing an initial screening.

UNITED STATES: A Pennsylvania judge was sued yesterday after incorrectly suspecting a man to be undocumented and detaining him on his wedding day. Alexander Parker, 22, a legal resident, sued District Judge Elizabeth S. Beckley and an unidentified court officer, whom, Parker says, told him he was not allowed to leave. The lawsuit claims Beckley called ICE when Parker went to the courthouse with his fiance to get married in May 2017. According to Parker, federal officers confirmed his permanent residency status after he spent hours in detention.

CUBA/PANAMA: A “freedom caravan” to the United States, composed of about 700 Cubans, is assembling in Panama. The group entered the country through the port of Obaldía, close to the Panamanian border with Colombia. Following the same logistical rationale as other migrant caravans that have departed from Honduras and El Salvador, this caravan’s objective is to reach the United States and seek asylum. The caravan also includes 120 migrants from Haiti, Venezuela and several African countries.

HAITI: As death toll continues to rise in the anti-government protests, President Jovenel Moïse remains silent. The embattled president has not given a public pronouncement about the violent demonstrations that have now taken the lives of nine civilians and injured dozens. New Senate leader Carl Murat Cantave demanded yesterday that Moïse address the nation “before it is too late.” The Canadian Embassy in Port-au-Prince has been closed since Wednesday, and several Canadian nationals are reportedly stranded on the island.

GUATEMALA: On Wednesday, Guatemala’s top electoral court cleared the way for the daughter of dictator Efraín Ríos Montt to run in the 2019 presidential election. The Citizens’ Registry had originally denied participation to Zury Ríos Sosa and her conservative party in the upcoming June elections on the basis of a constitutional clause that prevents relatives of former presidents from running. Her father, Ríos Montt, became de facto head of state in 1982 following a coup. He died last year. In 2013, Ríos Montt was tried and found guilty of genocide. The ruling was later reversed by Guatemala’s Constitutional Court. This will be Ríos Sosa’s second time running for president after a failed campaign in 2015.

VENEZUELA: Yesterday, the attorney general of Venezuela opened an investigation into opposition leader Juan Guaidó’s appointees to the transitional board overseeing Petróleos de Venezuela, the state oil company, and its subsidiary Citgo. The prosecutor, Tarek William Saab, said that Guaidó’s appointees and the National Assembly are both illegally trying to seize national power with the support of foreign governments.

COLOMBIA: Juan Carlos Sánchez Latorre was sentenced Wednesday to 60 years in prison for sexually abusing 276 children. Sánchez Latorre, known as his alias “Lobo Feroz” (the Big Bad Wolf), was arrested in Venezuela a year ago and extradited to Colombia to be tried for the crimes committed between 2007 and 2008. According to prosecutors, Sánchez Latorre approached his victims online and later met them at shopping centers where he offered them money in exchange for sex. Victims were later abused in his home where he recorded and photographed the acts to sell the footage online.