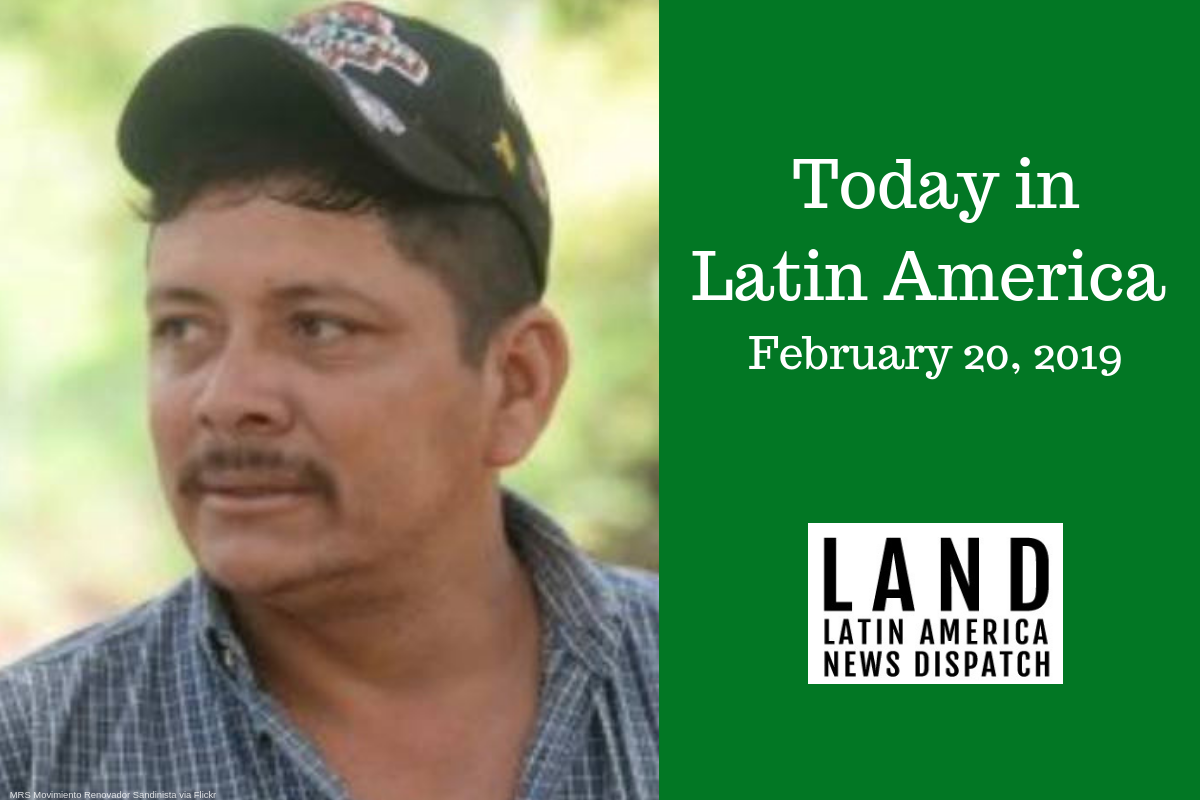 Farmer activist Medardo Mairena and two others were given a total of nearly 600 years prison time, but they can only serve 30 each under Nicaraguan law. (Photo by MRS Movimiento Renovador Sandinista/Flickr)

NICARAGUA: On Monday, a judge in Nicaragua sentenced three farm leaders to over 100 years in prison for participating in protests against President Daniel Ortega. Medardo Mairena is staring down the longest sentence, at 216 years. He was convicted of terrorism and held responsible for organizing the shooting that killed a teacher and four police officers in July. At the time, both men were participating in marches more than 100 miles away. The farmer’s allies say the conviction is political.

Pedro Mena’s sentence is 210 years, and Luis Orlando Pineda’s 159. The judge blew up those numbers from what prosecutors asked for, but they are mostly symbolic, since Nicaragua has a prison-time cap of 30 years. The three men had opposed a large canal project and joined a growing protest movement, eventually helping block roads. Just two days earlier, the government released a statement that said it would resume peace talks.

MEXICO: Isla Marías —a prison off the Pacific coast with a dark history— will close and become a center for art, sports and the environment named after a famous novelist who was incarcerated there. About 200 out of 600 prisoners will be released while the others transfer to other prisons. Although state penitentiaries in Mexico are severely overcrowded, El País reported that the federal prison system has room for 41,000 people. The island facility was the last of its kind and has $150 million in hurricane damage.

U.S.-MEXICO BORDER: A Mexican national died in border patrol custody on Monday after being detained for suspicion of “illegal reentry.” The man, unidentified by U.S. Customs and Border Protection (CBP), was detained on February 2 and treated at medical facilities at least twice prior to his death at a hospital in McAllen, Texas. According to records, the man was diagnosed with cirrhosis of the liver and congestive heart failure, but the official cause of death is still unknown. In a news release, the agency’s spokesperson said the agency is “committed to ensuring the safe and humane treatment of those” in its custody. This marks the third death under CBP custody in recent months, amid growing concerns about inadequate care in detention facilities.

JAMAICA: The government is trying to reclaim Venezuela’s share in the oil refinery, Petrojam, which totals 49 percent. Prime Minister Andrew Holness has asserted that his motivations are not political, but purely economic. Jamaica tried to buy back the shares last year, but is now moving to force the transfer through legislation. At a press conference, officials discussed the “international scrutiny” represented by U.S. sanctions and the feeling that the “shared commitment” between Jamaica and Venezuela “no longer exists.”

PUERTO RICO: U.S. Senators Bill Cassidy of Louisiana and Brian Schatz of Hawaii introduced legislation for a feasibility study of offshore wind turbines in Puerto Rico and other territories. The bill reflects one introduced by Puerto Rican Rep. Jenniffer González Colón on Feb. 6. Existing offshore laws would reserve a percentage of the revenue to go toward environmental mitigation on the island and a smaller percentage toward preserving coral reefs.

GUATEMALA: A judge in Guatemala City ruled yesterday that five Guatemalan officials will go on trial over a blaze that killed 41 girls at a youth home. The charges include “dereliction of duty, mistreatment of minors and manslaughter.” Deputy police inspector Lucinda Marroquín Carrillo was the only one to comment publicly after the hearing, saying, “I am innocent.” The day before the fire, more than 100 girls had run away from the facility. As punishment, an investigation found, about half of them were locked in a small space for hours before one girl lit a match.

VENEZUELA: Yesterday, Venezuelan officials banned sea trips to three Dutch Caribbean islands. Commercial and fishing boats are not allowed to travel to the islands of Curaçao, Bonaire and Aruba, as the maritime border has been closed “indefinitely.” The Netherlands, one of several dozen countries that recognize assembly leader Juan Guaidó as Venezuela’s legitimate president, planned to set up its aid hub on the islands off the coast of the embattled South American country.

COLOMBIA: Two female soccer players have denounced the Colombian Federation (FCF), alleging discrimination. Isabella Echeverri and Melissa Ortiz, who represent Colombia internationally, said through social media that the FCF “does not pay us.” Echeverri and Ortiz emphasized the lack of financial support they receive and demanded to be paid living wages. Ortiz was interviewed on the same issue back in December 2018, when she also explained how she and her colleagues felt threatened by the FCF’s mistreatment.

.@MelissaMOrtiz highlights the poor conditions and negligence that caused her and others to stop playing for the Colombian women’s national team after years of service.

For all of Planet Fútbol TV Episode 53 (and a free trial): https://t.co/lWYmZF0ZQ0pic.twitter.com/OADYY7lqJu

CHILE: A mining company is facing up to $55 million in fines for environmental violations. An environmental watchdog sued the Lumina Caserones copper mine in the Atacama Desert, near Chile’s border with Argentina, for using too much water from wells. A total of 18 infractions means that the the two Japanese companies that operate the mine could lose their permits and have to pause or permanently stop operations if they fail to present an environmental compliance plan before the end of the month.

BRAZIL: Brazil announced that it will ban all of its upstream dams used to store mining waste by August 2021. The government expects companies using a total of 84 mining waste dams, mostly located in the Minas Gerais region, to hand in plans for decommissioning facilities by mid-August. The decision comes after the Brumadinho dam collapse of Jan. 27, which left 300 people dead or missing.