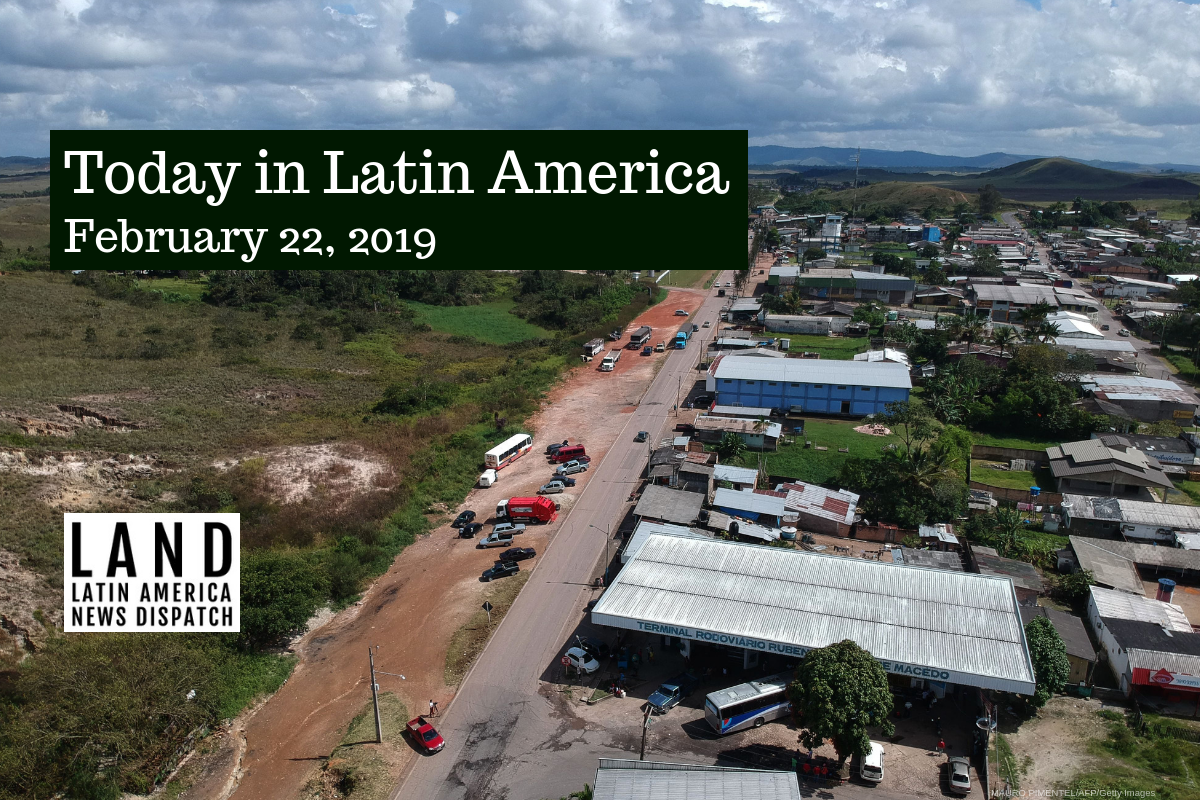 Drone view of the road BR-174, which links the border cities of Santa Elena de Uiaren in Venezuela and Pacaraima in Brazil, on August 22, 2018. (Photo by Mauro Pimentel/AFP/Getty Images)

The border closures occurred just days ahead of the February 23 date set by opposition leader Juan Guaidó to send aid caravans into Venezuela from Colombia, where U.S.-supplied food and medicine has been piling up. Another supply sent from Venezuelans in Miami arrived in Curaçao yesterday after Maduro blocked air and sea travel between the island and Venezuela. Saturday, the day of the aid showdown, will mark one month since Guaidó declared himself interim president of Venezuela.

UNITED STATES: House Democrats plan on filing a motion to block President Donald Trump’s emergency declaration today. The formal introduction of the measure will prompt a vote in the House of Representative in the coming weeks. On Wednesday, in a letter to her colleagues, House Speaker Nancy Pelosi said that the motion would move “swiftly” through House. Should the bill pass the House, it will go for a vote in the Republican-controlled Senate. Trump is expected to veto the bill if it reaches his desk.

MEXICO: Mexican officials invited a team of international experts to investigate the 2014 case of the 43 missing students in the town of Iguala. The Organization of American States’ Inter-American Human Rights Commission will manage the case for a second time, according to human rights official Alejandro Encinas. The previous group arranged by the commision did not agree with Mexican prosecutors’ conclusion that the students were turned over to a drug gang by police and burned in a fire.

MEXICO: Two past employees of gun manufacturer Heckler & Cole were convicted by a German court yesterday for delivering weapons that were discovered in states across Mexico. A former sales manager was charged with exporting goods using false permits, and a former clerk as an accessory. The Stuttgart state court said that from 2006 to 2009 the company transported 4,219 assault rifles, two submachine guns and 1,759 magazines of ammunition to the states of Jalisco, Guerrero, Chihuahua and Chiapas.

CUBA: On Sunday, Cubans will vote on a historic constitutional referendum. The party-proposed overhaul of the 1976 document which ratifies the socialist character of the island and includes a series of additions. Among these are the recognition of private businesses, private property, foreign investment, and the internet. The charter also introduces presidential term limits and the prime minister position. After a series of protests in December 2018, the government decided to remove support from gay marriage. Supported by the incumbent government, the “Yes” campaign is expected to win.

JAMAICA: The Jamaican high commissioner has called for the Windrush deportations from the United Kingdom to stop. Yesterday, at the Jamaican Embassy in London, Seth George Ramocan addressed a group of people whose relatives had been deported to Jamaica on a chartered flight on February 6. The Windrush generation refers to a group of Caribbean immigrants who came to the United Kingdom from in the 1940s. With many people still at risk of being deported, Ramocan called for a full investigation to be made before any further steps are taken.

NICARAGUA: After condemning the regime in Venezuela, U.S. National Security Advisor John Bolton hinted that President Daniel Ortega “has his days numbered.” Referring to the arrests and convictions made against members of the opposition on Monday, Bolton tweeted that “the Nicaraguan people will soon be free.”

The Ortega regime has sentenced three farm leaders to 550 years in prison for their roles in protests in 2018, where Ortega’s police forces reportedly killed 300 activists. As President Trump said Monday, Ortega’s days are numbered and the Nicaraguan people will soon be free.

The United States has also accused the Ortega regime of several human rights abuses and a crackdown on freedom of speech, imposing sanctions on Vice President and first lady Rosario Murillo in November 2018.

PERU: On Wednesday, seven workers were killed by a landslide in Mucumayo, an unregulated mining camp in the province of Carabaya in southern Peru. While the survivors on the campsite organized their own search and rescue mission, state authorities struggled to reach the site. There are about 3,000 irregular miners in Mucumayo, and more than 15 have died in similar incidents over the past five years.

BRAZIL: Yesterday, the prosecutor general’s office announced that Senator Flávio Bolsonaro, President Jair Bolsonaro’s son, is being investigated for money laundering in connection to two luxury apartments he purchased in Rio de Janeiro. The probe began in 2017 after the Council for Financial Activities Control found that in one month, 48 unexplained deposits totaling $27,000 were deposited into the senator’s bank account.