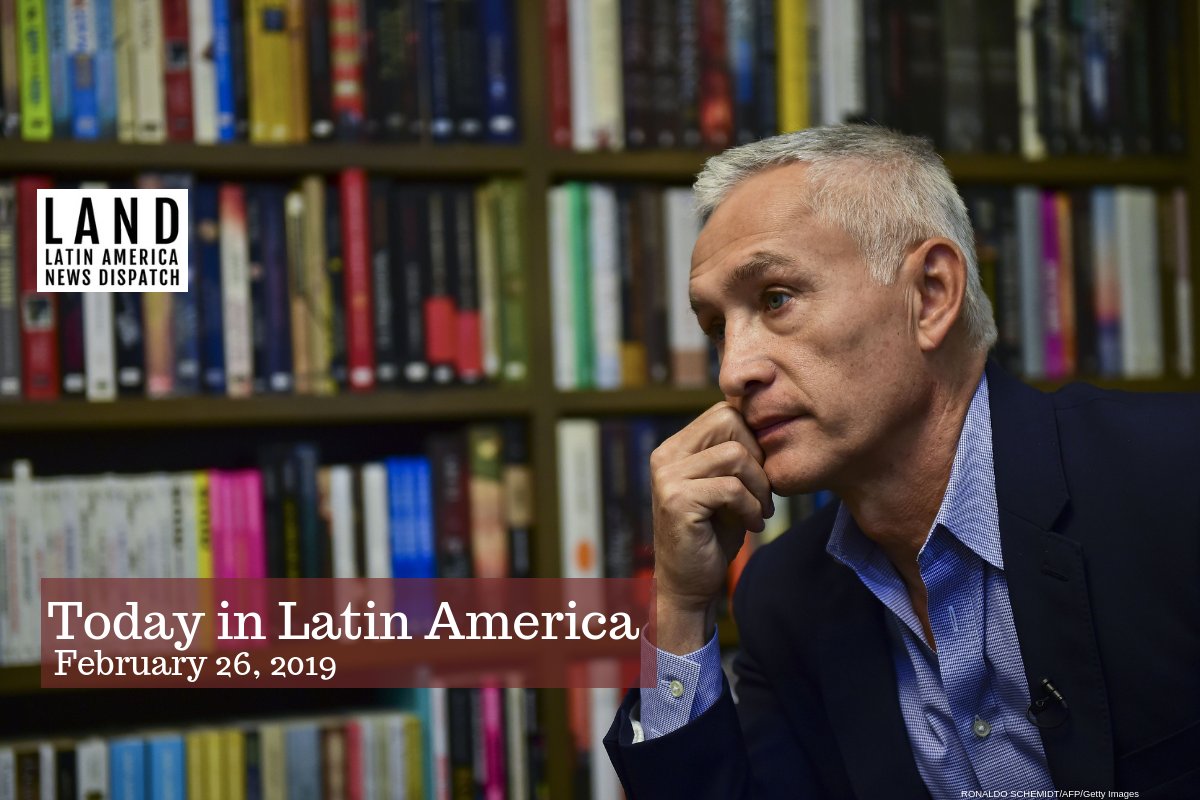 UNITED STATES/VENEZUELA: U.S. Vice President Mike Pence appeared before the Lima Group yesterday, announcing new sanctions on four pro-government governors and urging other regional leaders to freeze oil assets and restrict the visas of Maduro supporters. The four governors join a list of over 50 Venezuelan officials under sanctions from the United States. Pence also announced the U.S. would channel $56 million to neighboring countries to mitigate the flood of Venezuelans leaving the country. Still, fear of the use of force is prevalent among the Lima Group leaders. “Let’s hope that the pressure of the international community, dialogue and prudence will prevail,” said Panamanian President Juan Carlos Varela.

Meanwhile, U.S. Spanish-language network Univision announced that a team headed by top anchor Jorge Ramos, was being detained at the Miraflores Palace in Caracas, allegedly because of unfavorable questions to Maduro, and had their technical equipment seized. The crew was later released.

UNITED STATES: Fifty-eight former U.S. security officials have signed a statement declaring that President Donald Trump’s emergency declaration to fund a border wall is not factually sound, exacerbates humanitarian issues on the border and undermines U.S. national security. The bipartisan group wrote that “under no plausible assessment of the evidence is there a national emergency today that entitles the president to tap into funds appropriated for other purposes to build a wall at the southern border.” The declaration was released yesterday, alongside a letter from 26 former GOP lawmakers that argued Trump’s actions undermined the constitution and went against his oath as president. U.S. officials plan to vote to block the emergency declaration today. While it is expected to pass in the Democrat-controlled House, and possibly the Republican-controlled Senate, Trump has already promised to veto the bill.

MEXICO: President Andrés Manuel López Obrador has auctioned off 196 of 218 government vehicles in an attempt to get rid of the “traditional trappings” of Mexico’s elite leadership. Since taking office on December 1, he has refused to live in the luxurious presidential compound, fly in the presidential jet or accept a personal protection detail. AMLO said yesterday that the auction raised $3.25 million, which would be given to social programs.

JAMAICA: Four police officers have been detained in a jewelry heist valued at more than $17 million. Last week, two Jamaican senior citizens reported a break-in to their residence and reported the crime to the Hellshire Police Station. On Sunday, men wearing police uniforms took $10 million worth of jewelry, only to return on Wednesday to take another $7 million, in addition to $5,500 in cash. The victims reported that the men assaulted them as they ransacked their house in St. Catherine, 13 miles outside of Kingston. Jamaica’s Major Organised Crime and Anti-Corruption Agency is currently investigating the incidents.

GUATEMALA: Rallying against the amnesty bill proposed in the Guatemalan Congress, Guatemalans commemorated the National Day of Dignity for Victims of the Internal Armed Conflict. Human rights activists and relatives of the 200,000 victims of the 36-year armed conflict congregated in front of the Supreme Court of Justice Building in Guatemala City, condemning the government’s intention to pass a blanket amnesty to former military officers convicted of crimes against humanity. The international community has also expressed concern regarding the legislative push led by conservative lawmakers.

COSTA RICA: President Carlos Alvarado has launched an economic plan to rid the country of carbon emission by 2050. The plan includes cutting greenhouse gas emissions by decreasing car circulation in urban areas by half. By 2035, 70 percent of Costa Rica’s buses will be electric. Although ambitious, the economic plan is supported by the country’s positive track record with green energy. Since 2014, 98.53 percent of Costa Rica’s electricity has been generated via renewable sources, like wind and solar power.

COLOMBIA: The Lima Group met in Bogotá yesterday and demanded that Venezuelan President Nicolás Maduro give up power and hold new elections. Composed of representatives from several countries who wish to find a peaceful exit to Venezuela’s crisis, the Lima Group supports the democratic transition that would see Juan Guaidó as the temporary president. Its formal declaration stated, “the transition to democracy must be conducted by the Venezuelans themselves, peacefully and within the framework of the Constitution and international law, supported by political and diplomatic means, without using of the strength,” ruling out the use of force to solve the political crisis.

ECUADOR: A landslide was reported in the neighborhood of Monserrat, in Conocoto, Ecuador, southeast of Quito. According to the Integrated Security Service ECU-911, at least seven people were injured in the incident’s aftermath. The Quito Fire Department reported that they sent support numbering 20 troops, seven emergency vehicles and a canine unit to handle the emergency. The landslide comes days after a 7.5-magnitude earthquake in Quito, which did not claim any lives.

ARGENTINA: The Network Information Center (NIC) in Argentina recently issued an alert for a possible attack on the country’s internet. NIC, the domain system used to govern where internet traffic is redirected, is normally coordinated by the Internet Corporation for the Assignment of Names and Numbers (ICANN), but the system may have been tapped into by “internet pirates” who wish to “attack the very infrastructure of the Internet,” an ICANN executives said. ICAAN was able to detect and prevent the attack, but warned about ongoing vulnerabilities.