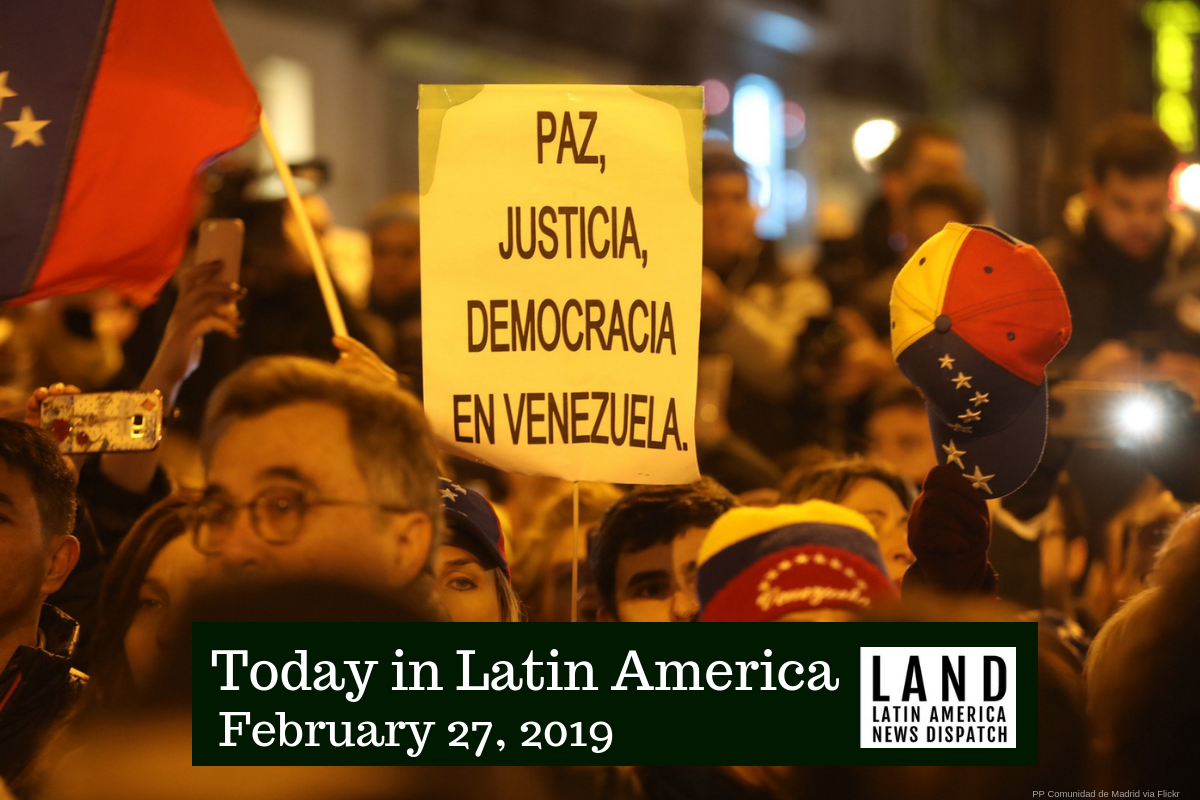 VENEZUELA/REGION: Opposition leader Juan Guaidó plans to return to Venezuela this week despite “credible threats” against his life. After the Lima Group of Latin American countries’ meeting on Monday, Colombia’s foreign minister said he will hold Maduro’s regime responsible for anything that happens to Guaidó and his family. The multilateral organization also urged the International Criminal Court to declare the blockage of aid by Maduro’s government a crime against humanity.

At a United Nations meeting yesterday, the United States pushed for a vote on a draft resolution over elections and humanitarian aid in Venezuela, though other Security Council members like Russia are likely to resist that move. The U.N. representative from the Dominican Republic urged against military intervention. A day earlier, Uruguay’s Deputy Secretary of Foreign Relations had argued that humanitarian aid should be “depoliticized” and overseen by the U.N. Uruguay and Mexico have taken a more neutral stance on the crisis than most other members of the Lima Group.

The Univision reporters detained in Venezuela earlier this week arrived in Miami yesterday. They disclosed that Maduro decided to confiscate their equipment after he was shown a video of Venezuelans eating garbage.

Journalist Jorge Ramos said he and his colleagues were told to stop the interview after only 17 minutes, during which he asked about “the lack of democracy in Venezuela, about torture, political prisoners, [and] the humanitarian crisis that they were living.”

UNITED STATES: U.S. territories, including Puerto Rico and the U.S. Virgin Islands, have requested additional federal disaster aid, reporting that the United States is no longer fully funding demolition and recovery projects. In a U.S. Senate hearing yesterday, the governors of Puerto Rico and the U.S. Virgin Islands requested quicker access to funding and extended Medicaid. The representatives worry that the region will not be able to recover fully from the 2017 hurricane season before another storm hits. “We don’t have that luxury of time,” said Gov. Albert Bryan Jr. of the U.S. Virgin Islands. “Some challenges we face are exacerbated by federal policies, which are within the power of Congress to change.”

MEXICO: The government is going ahead with plans to continue construction of a hydroelectric project in the state of Morelos, amid outcry from activists who say the vote over the project was “rigged and illegal.” This is the third high-profile referendum during President Andrés Manuel López Obrador’s presidency, and it won 60 percent approval with only about 10 percent turnout.The Integral Morelos Project (PIM) includes two thermoelectric plants, a gas pipeline and an aqueduct in Central Morelos. For years, the PIM project has drawn criticism about its environmental impact on agricultural fields and on a nearby volcano. Opposition escalated when activist and PIM critic Samir Flores was murdered two days before the vote was scheduled to take place.

BRITISH VIRGIN ISLANDS: Voters on Monday elected eight members of the Virgin Islands Party (VIP) to the House of Assembly, making VIP the new ruling party. The National Democratic Party took three seats, while Progressives United and Progressives Virgin Islands each saw one member elected. The election was unusual for the first-time use of an electric tabulating system and the record number of first-time candidates.

NICARAGUA: Talks over Nicaragua’s political standoff were expected to begin today, but opponents of President Daniel Ortega’s government are not celebrating yet. Their demands  include the release of 770 people from jail and the relaxation of pressure on the media. The Roman Catholic Bishops’ Conference said it will “participate as an observer” in the talks. The location and time of the meeting is unknown, and the government has yet to announce whether Ortega and his wife, Vice President Rosario Murillo will take part.

COSTA RICA: The Vatican announced its decision to expel a Costa Rican priest accused of sexually abusing two teenagers this week. After learning of the accusations, Mauricio Víquez  left the country for Panamá and then Mexico, according to the Costa Rican court that issued an international warrant for Víquez’s arrest. He has 60 days to appeal the expulsion. The church first received a complaint about the priest in 2003 and moved to suspend him in 2018.

COLOMBIA: The National Federation of Coffee Producers is considering setting its own price for coffee, saying growers cannot break even with the New York market price. Roberto Vélez, head of the federation, said New York prices are too dependent on Brazilian production and do not take into account other producers. The new price would be about half a dollar higher, and would need support from arabica growers within and outside of Colombia as well as buyers. Velez hopes to find back-up among producers in Africa and Asia. Colombia is the third largest producer of coffee in the world, specializing in washed arabica.

PARAGUAY: Brazilian President Jair Bolsonaro praised deceased dictator General Alfredo Stroessner, who ruled Paraguay for 35 years during a binational event on the Paraguay-Brazil border. Bolsonaro, himself a former army officer, called Stroessner a “man of vision” for his role in the construction of the Itaipu Dam. Bolsonaro said he looked forward to welcoming current President Mario Abdo Benítez to Brasilia to deepen ties between the two countries and vowed “the left never again.” Benítez has a state visit planned to Brazil in mid-March.

BRAZIL: The Ministry of Education stirred controversy Monday when it told administrators to read a declaration to students that ended with President Jair Bolsonaro’s 2018 campaign slogan, “Brazil above everything, God above everyone.” The letter also instructed school officials to film students singing the national anthem for an initiative to “value national symbols.” After public outcry against the unauthorized filming of minors and politicizing the classroom, the ministry nixed the slogan and instructed schools to only film students with parental permission.