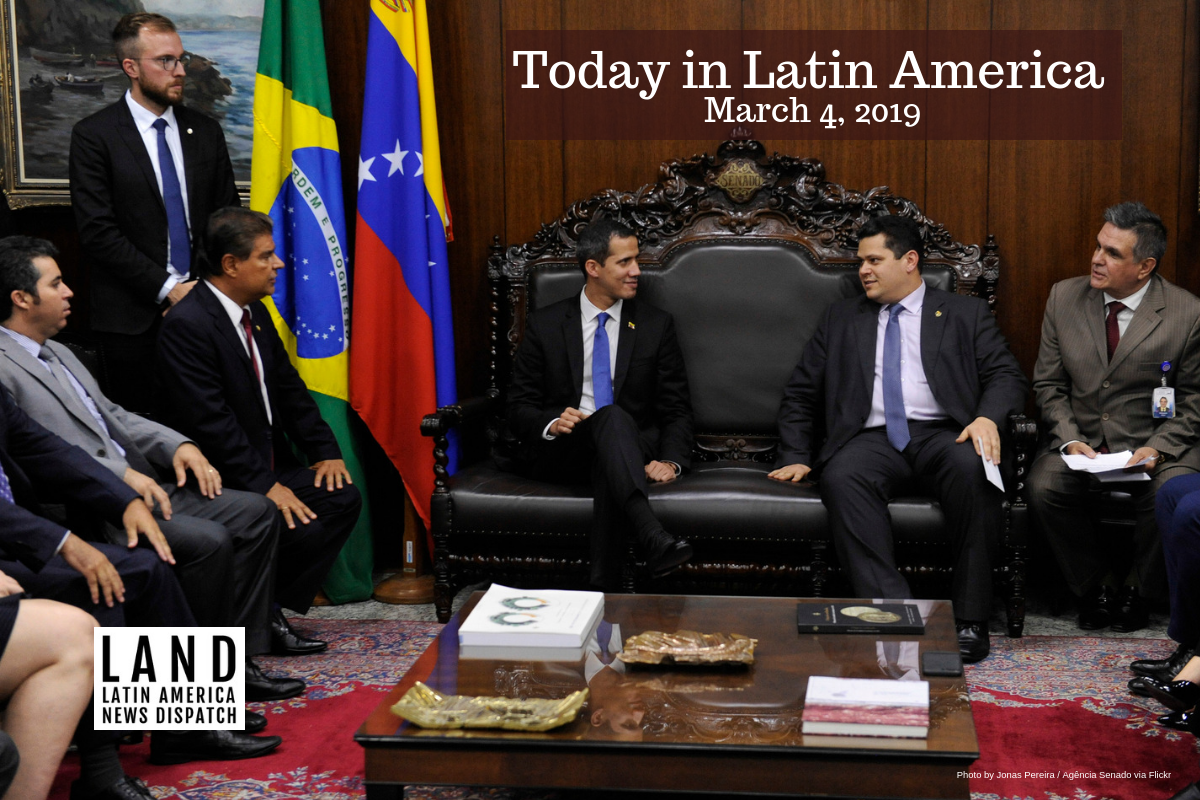 VENEZUELA: Opposition leader and self-declared interim president Juan Guaidó has called for nationwide demonstrations today, as he is set to return to Caracas after a series of meetings with several presidents from across Latin America. The protests come a week after Guaidó defied a travel ban imposed by a Venezuelan court in order to coordinate the delivery of humanitarian aid at the border with Colombia.

In a meeting that including the heads of state of 10 Lima Group countries held in Bogotá on February 25, Guaidó met with U.S. Vice President Mike Pence, who announced more economic sanctions to the regime of President Nicolás Maduro. Over the last week, Guaidó also toured Brazil, Paraguay, Argentina and Ecuador, meeting with each country’s head of state to seek support for his transition government. Via Twitter, Guaidó called for national demonstrations to start at 11am today and continue until tomorrow, coinciding with the celebration of Carnival in Venezuela.

UNITED STATES: President Donald Trump’s national emergency declaration may now be blocked by the U.S. Senate. Senate Republican Rand Paul of Kentucky said he will not vote in the president’s favor, joining three other GOP Senators: Susan Collins of Maine, Lisa Murkowski of Alaska, and Thom Tillis of North Carolina. On February 26, the U.S. House of Representatives voted to undo the declaration. After passing the Senate, the measure will then go back to the president, which he is expected to veto.

MEXICO: Last Friday, the Mexican government said it closed five migrant holding centers across the country, citing poor conditions that include lack of medical services and beds. The National Migrant Institute (INM) said in a statement that it closed centers in the cities of Morelia, Acapulco, Nogales, Reynosa and Tuxpan. INM authorities stated that the migrants were relocated to a shelter in Mexico City.

MEXICO: Mexico’s Congress is expected to vote on a major labor reform bill this spring, which is viewed as an integral step to ratifying the new United States-Mexico-Canada (USMCA) trade agreement. The push is a multinational attempt to level the playing field between American and Canadian workers and lower-paid Mexican workers, via the strengthening of workers rights and labor unions. Although the debate has already begun in the chambers of Congress this past week, Mexico said it will not ratify the new USMCA until the Trump administration lifts the tariffsit imposed on steel and aluminum imports.

CUBA: On Sunday, the Ministry of Tourism recorded Cuba’s first million tourists of the year and announced that its goal is to reach of 5 million visitors by the end of 2019. Last year, over 4.7 million international visitors arrived in the island, representing a 1.3 percent increase from 2017 figures. Tourism accounts for 10 percent of Cuba’s GDP and creates roughly half a million jobs in the island, making it the second largest source of income for the island. More than 800,000 cruise passengers visited Cuba in 2018.

NICARAGUA: After three days of talks between the government and opposition, no consensus has been reached over the substantive action items going further. Cardinal Leopoldo Brenes, leader of the Catholic Church of Nicaragua, is uncertain about the participation of the clergy in the ongoing National Dialogue for peace with President Daniel Ortega. Only one member of the Nicaraguan clergy has participated as a witness in the last three meetings of the National Dialogue. Ortega’s regime has already rejected the participation of international observers in the talks with the opposition. The National Dialogue continues today in Managua.

PANAMA: World champion boxer Eusebio Pedroza died this past Friday from pancreatic cancer in Panama City at age 62. Nicknamed the “Scorpion,” Pedroza kept his title as world champion from 1978 to 1985, defending his title a record 19 times. As a featherweight boxer, Pedroza won 41 fights (25 knockouts), earning him an induction to the International Boxing Hall of Fame in 1999.

BOLIVIA: On Saturday, thousands of people took to the streets to celebrate Bolivia’s annual Carnival celebrations. The largest parade in the country included more than 20,000 street performers in the mining city of Oruro, south of the capital city of La Paz. Many revelers performed folk dances and wore Indigenous dress along the 3-mile procession to the Virgen of Socavon church. President Evo Morales and Paraguay’s President Mario Abdo Benitez attended the parade after confirming a deal to raise Bolivia’s petroleum gas exports. Recognized by UNESCO for its intangible cultural heritage, Oruro’s Carnival celebrations will come to a close tomorrow.

BRAZIL: The chief executive officer of the mining company Vale SA resigned yesterday after a disastrous dam containing mining waste collapsed in the state of Minas Gerais. Brazilian Fabio Schvartsman, 65, handed in his letter of resignation along with three other senior executives. It was immediately accepted by the company’s board of directors, according to a statement released Saturday night. The largest iron ore producer in the world, Vale SA came under increased scrutiny after a company owned dam collapsed in the town of Brumadinho on Jan. 25, killing at least 186 people.

BRAZIL: On Saturday, former President Luiz Inácio Lula da Silva was allowed to temporarily leave prison to attend the funeral of Arthur, his 7-year-old grandson. The funeral was the first time the former leader of the Workers’ Party has left prison since his 12-year sentence for corruption and money laundering started in April 2018. Da Silva insisted he was innocent of the charges during the speech at the funeral, as around 200 supporters chanted “Free Lula” outside the cemetery. The ex-president returned to his prison cell later that same day.