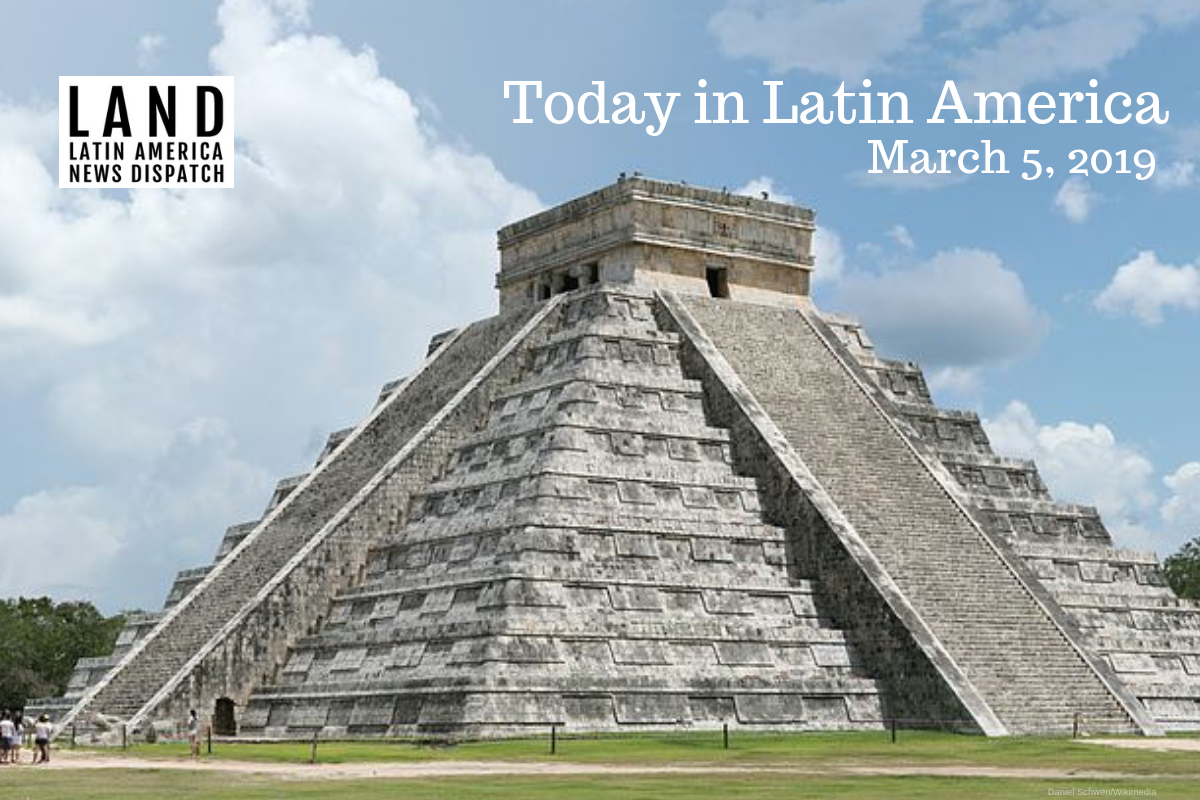 MEXICO: Archaeologists discovered around 200 pristine ceramic vessels and ritual offerings dating back to 1,000 A.D. in Chichén Itzá’s cave system. The National Institute of Anthropology and History (INAH) released a press statement on Monday saying that the discovery was a “second chance” at understanding the history of Mayan civilization.

Indigenous community members originally discovered the cave, called Balamku, 50 years ago, but were told to keep it sealed by an archaeologist, whose brief report was forgotten in government archives. The new team exploring the cave, led by archaeologist Guillermo de Anda, is in the process of exploring the underground water system beneath Chichén Itzá. They hope to find a connection to another cave believed to lie under the pyramid Kukulkan.

UNITED STATES / PUERTO RICO: For the first time, the United States will publish its own data on Puerto Rico’s consumption, business investment, and trade, as it does for all other U.S. territories. The Congressional Task Force on Economic Growth in Puerto Rico first called for the federal government to take on the task in 2016, a year before the devastation of Hurricane Maria. The information will provide a “modern” set of statistics based on international economic accounting standards, after the Puerto Rican government was criticized for irregularities in its own economic data. $8.2 billion has already been pledged towards the effort.

MEXICO: President Andrés Manuel López Obrador (AMLO) has canceled the Los Cardones project, a gold mining project in the Baja California province. AMLO told a crowd on Sunday that the government had to “safeguard the paradise, not destroy it” in order to work towards a sustainable tourism model for the community. The announcement is part of a larger initiative to “improve” over 15 cities whose economies rely heavily on tourism, including awards given to the cleanest and most attractive communities.

CUBA: The Trump administration will tighten the embargo on Cuba by allowing lawsuits against Cuban companies that confiscated properties after the 1959 revolution. Title III of the 1996 Helms-Burton Act allows American citizens to sue Cuban companies linked to the state, the military or intelligence services. Secretary of State Mike Pompeo announced the decision via Twitter, stating that “doing business with Cuba is not worth trafficking in confiscated property.” Following this move, around 200 Cuban companies might be sued in a U.S. court.

Today I announce an exception to the 30-day suspension of #TitleIII of the Libertad Act. We must hold #Cuba accountable and make whole U.S. claimants for assets seized by the Cuban government. Doing business with Cuba is not worth trafficking in confiscated property.

BAHAMAS: The U.S. State Department issued a Level 2 travel warning to the archipelago in the wake of rampant violent crime. The State Department advises to “exercise increased caution” when circulating the islands of Grand Bahama and New Providence, especially at night. In effect since Feb. 25, the travel warning states “jet-ski operators have been known to commit sexual assaults” against international visitors.

PANAMA: The electoral campaign for Panama’s presidential elections was officially launched yesterday. Seven candidates will feature in the May 5 ballot. Laurentino Cortizo of the Democratic Revolutionary Party (PRD) leads the polls by double-digits ahead of Rómulo Roux of Democratic Change (CD). Mostly employed by the federal government as members of security forces and first responders, more than 4,000 Panamanians cast their vote yesterday.

VENEZUELA: Upon his arrival in Venezuela on Monday, the president of the National Assembly, Juan Guaidó, visited Plaza Alfredo Sadel in Las Mercedes to guarantee his function as president “in charge.” Despite President Nicolás Maduro’s threats to imprison him, Guaidó encouraged supporters to continue their campaign to bring down Maduro’s government by climbing a scaffolding, flashing his passport and pumping his fist during a demonstration. Guaidó was returning from a prior rebellion in which he pushed aside orders to stay in Venezuela last month, and instead traveled to Argentina, Brazil, Colombia, Paraguay and Ecuador, all countries which support his claim to the presidency.

CHILE: After Isabel Plá, the Minister of Women and Gender Equity, stated last week that an upcoming feminist strike would only be used by other groups to push their own political agendas, two additional ministers voiced their agreement yesterday. Government spokesperson Cecilia Pérez remarked that a strike will not help any feminist causes and suggested that “the rights of women can be achieved when everybody mobilizes.” The Minister of Justice, Hernán Larraín, said that “someone is taking advantage of the women’s cause for other purposes…they have politicized it.” The strike is set for March 8, known worldwide as International Women’s Day.

BRAZIL: Mangueira, a top samba school and one of the oldest in Rio, and other groups are paying tribute to Marielle Franco, an activist for gay and Afro-Brazilian rights who was killed almost one year ago. Franco and her driver, Anderson Gomes, were shot to death while driving to Rio de Janeiro on March of 2018. Although the murder ignited several demonstrations nationwide, police have still not named any suspects. Franco, who was homosexual and black, was considered a standout among Brazil’s mainly white and male political spectrum.